Learn how to make Almond Flour Pie Crust with my easy 5-ingredient pie crust recipe. It is vegan, gluten-free, dairy-free and low carb. This amazing pie crust is a great base for any sweet pie,  tart, cheesecake recipes. 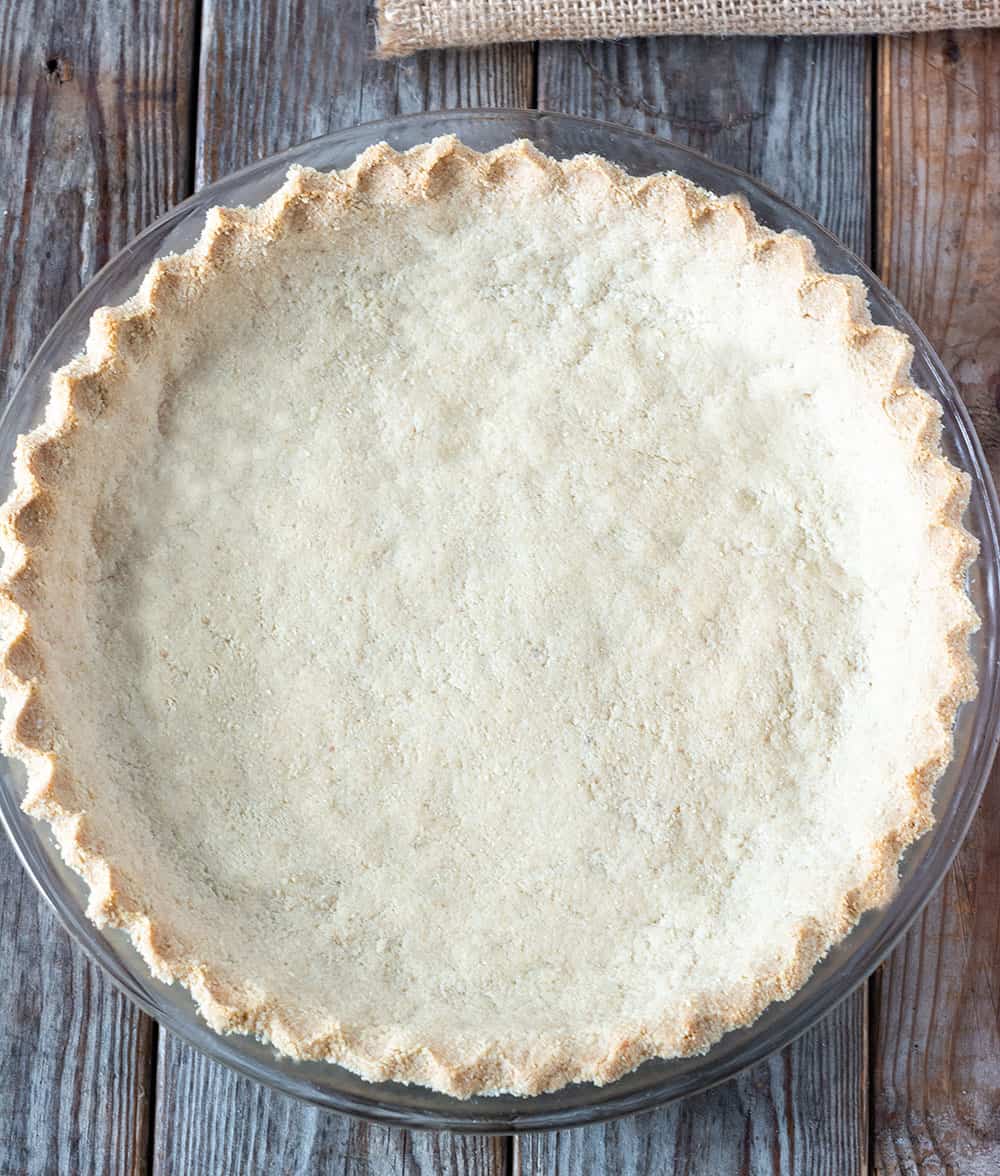 Learn how to make Almond Flour Pie Crust with my easy 5-ingredient pie crust recipe. It is vegan, gluten-free, dairy-free, and low carb. This amazing pie crust is a great base for any sweet pie, tart, or cheesecake recipe.

Lately, I have been making no-bake recipes with my pre-baked Graham cracker pie crusts. My Strawberry Cream Pie and Vegan Peanut Butter Pie have been a huge hit with my family.

Today, I decided to make a simple almond flour crust that turned out amazing. It had a delicate sweet crumb crust with a tender buttery crust it was ready in no time, only took me 5 minutes to prepare and 20 minutes to bake.

SCROLL DOWN FOR THE DETAILED RECIPE, BUT I SUGGEST YOU DON’T SKIP THE INFORMATION INCLUDED IN THE BLURB.

This recipe for almond flour pie crust is so awesome. I’m super excited to share this with you. Here are a few reasons why you’ll love this pie crust recipe: 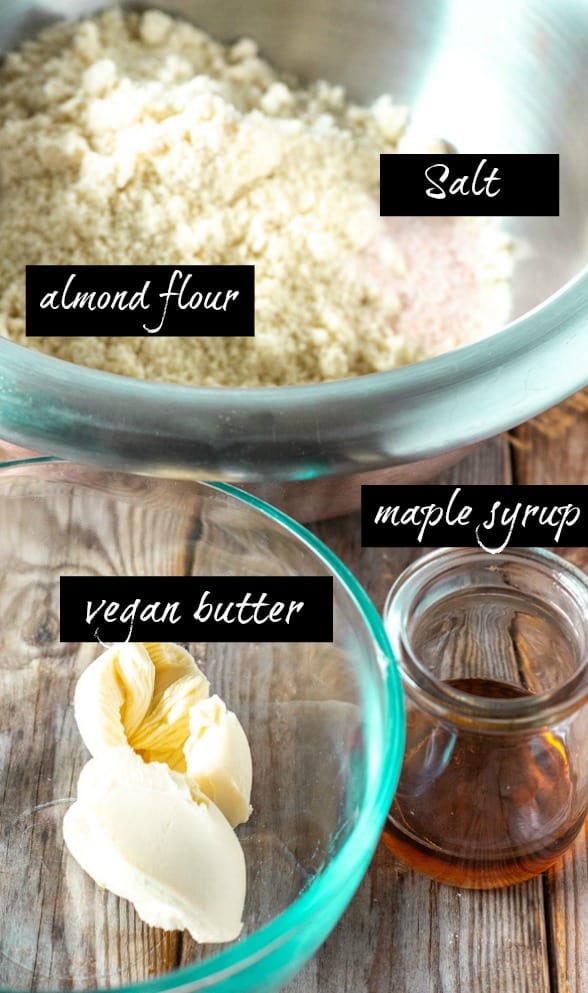 I used Earth Balance Buttery Spread. You can use almond butter, coconut butter, cashew butter, or sunflower seed butter. You can also use coconut oil in place of vegan butter. 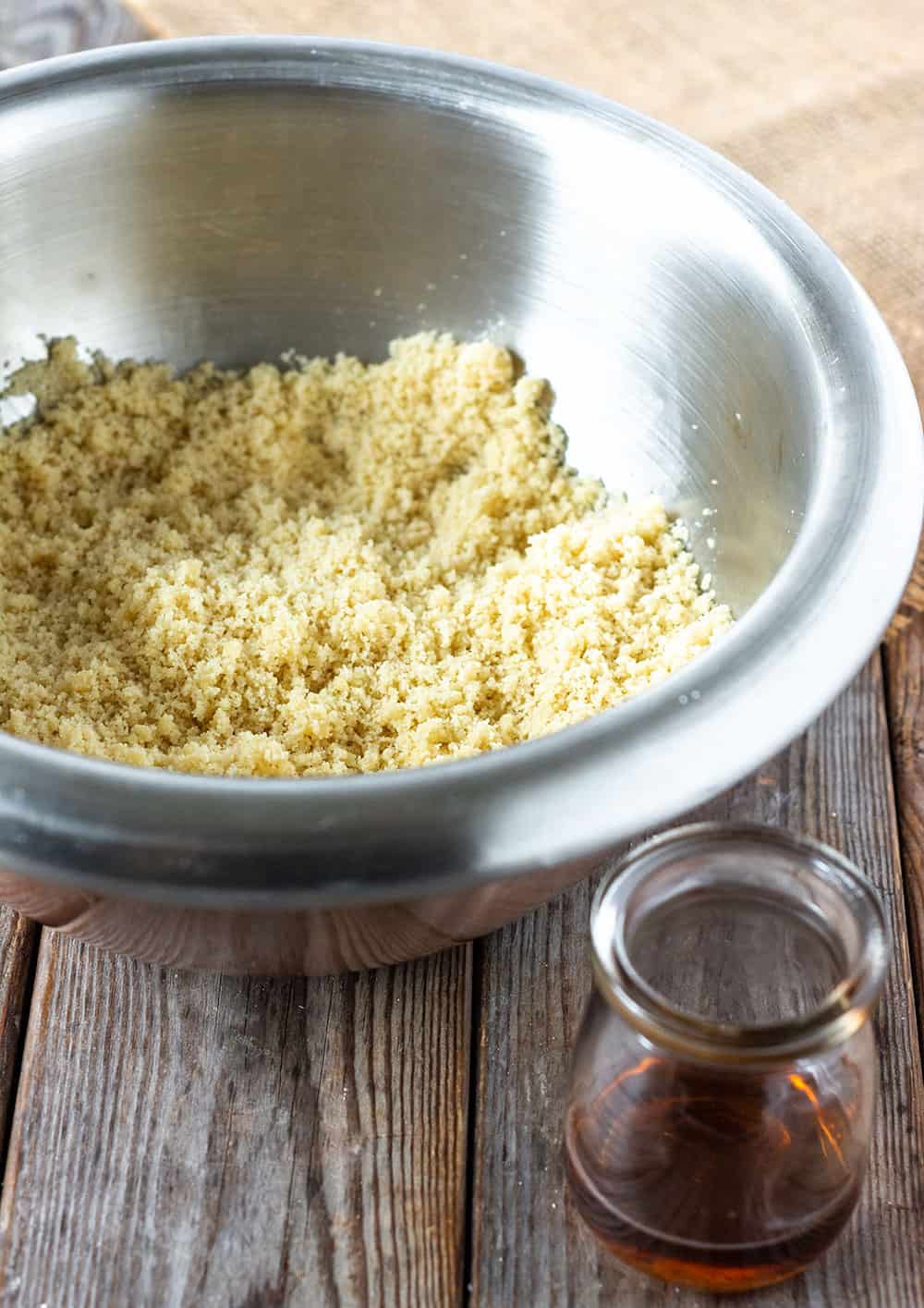 Preheat the oven to 350 degrees F. Place almond flour and salt in a bowl. Cut in the vegan butter or coconut oil, and mix with a pastry cutter, or your hands until the mixture resembles breadcrumbs.

Add maple syrup and vanilla and mix. Press dough into a prepared pie plate, pressing along the bottom and sides, flute the edges, and bake in the oven for 20 minutes or until the crust is golden brown.

Most of the time, you don’t need to add much to make a fantastic almond flour pie crust. It’s a flaky, buttery base that lets your filling shine.

However, depending on what you’re filling it with, you can flavor the crust itself. To get you started, consider the following suggestions: 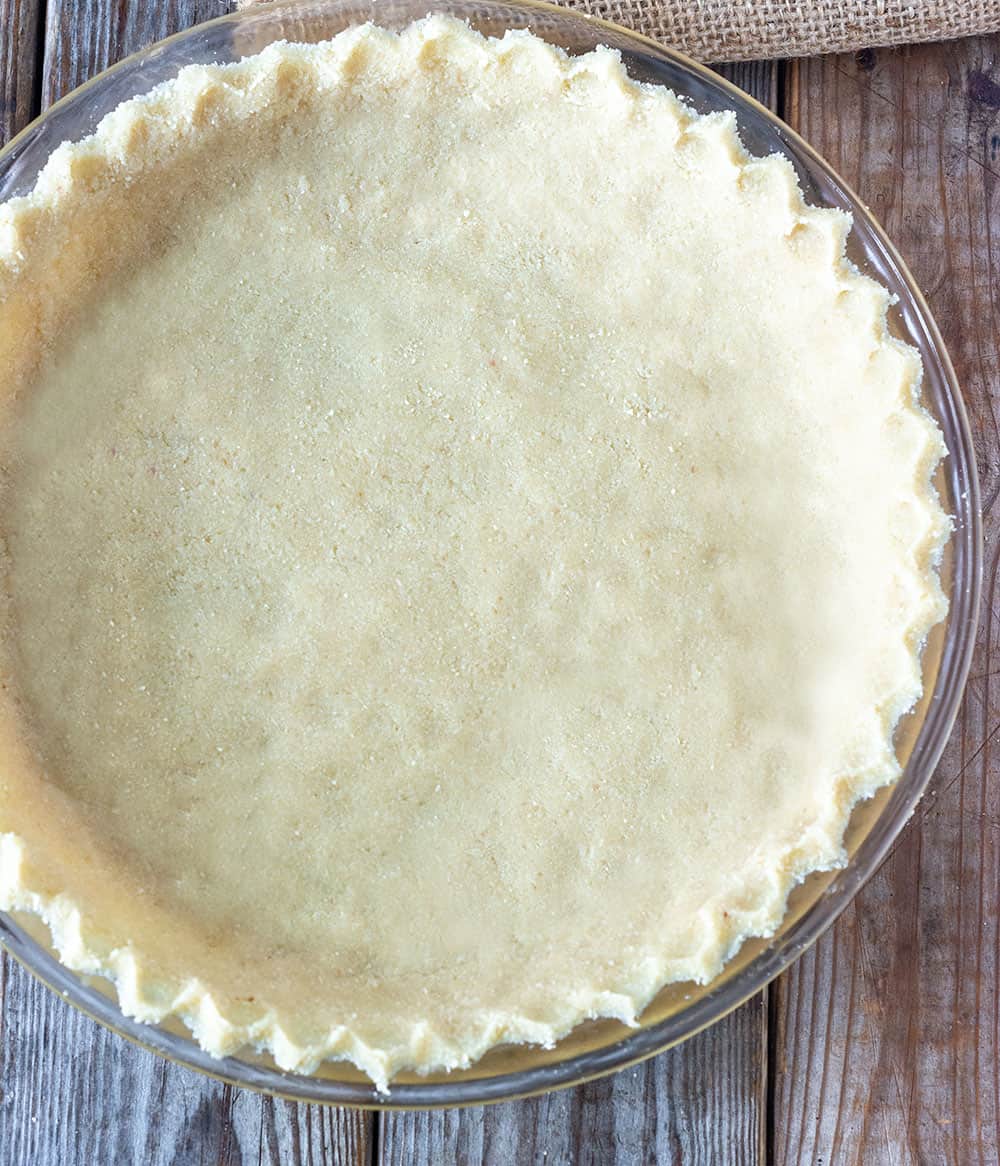 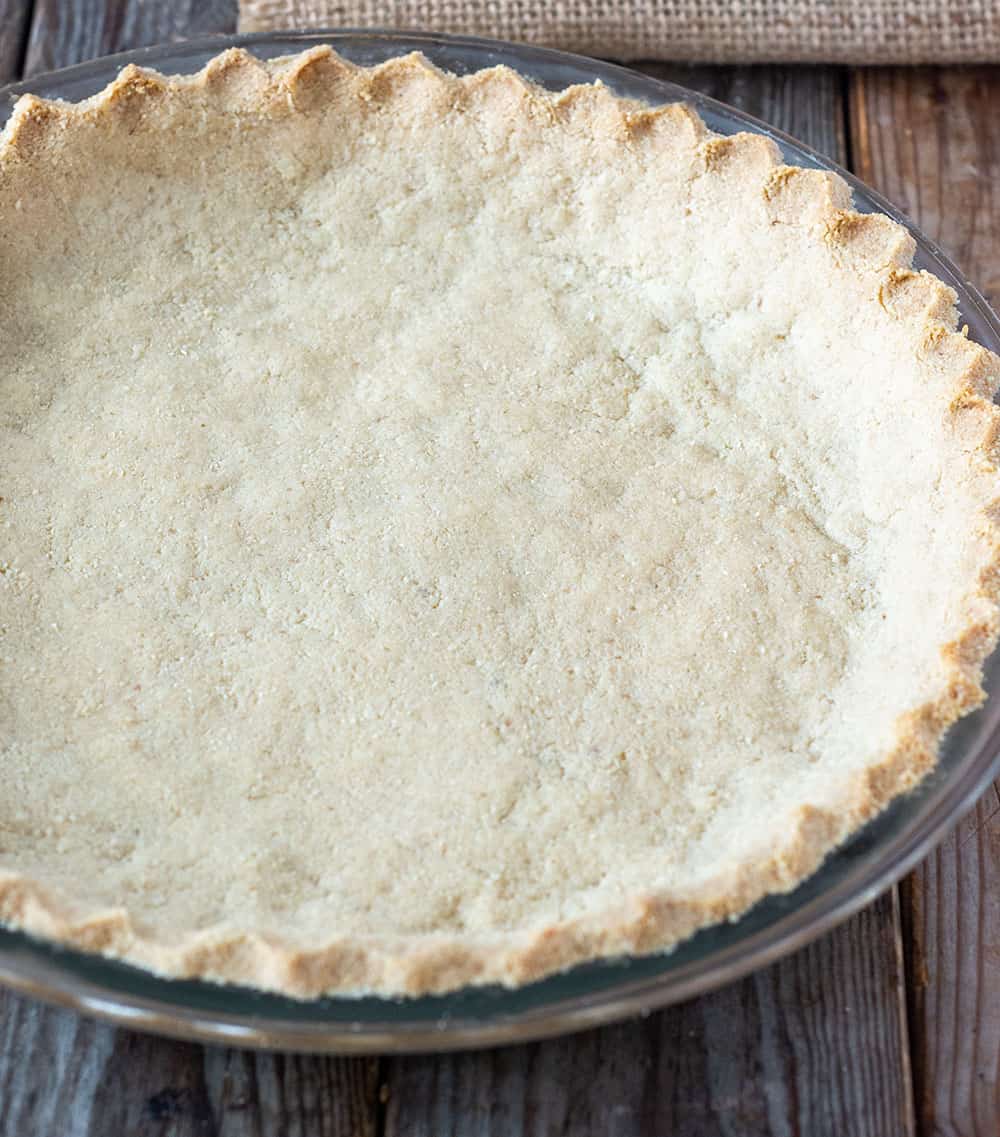 Can You Prepare Almond Flour Pie Crust In Advance?

Yes, absolutely! You have three choices:

Yes, you can freeze almond flour pie crust. Dough balls, raw crusts pressed into pans or pre-baked crusts can all be frozen using the same methods described above. It is entirely up to you!

To determine whether or not you may freeze this crust with filling inside, you should refer to a specific recipe. With some fillings, the crust, like any other crust, might get soggy when thawed.

Place the crust on the counter or in the refrigerator overnight to thaw it.

How To Use Almond Flour Pie Crust?

For both bake and no-bake pie recipes, this almond flour pie crust can be utilized in place of any pie crust that is cooked before filling. This amazing pie crust is a great base for any sweet pie,  tart, or cheesecake recipe.

What Is The Difference Between Almond Meal And Almond Flour?

Almond flour and almond meal are both made from ground almonds but there is a difference. To make almond flour, the almonds are first blanched and the skins are removed, then the almonds are grounded into flour.

On the other hand, the skins of the almonds are kept intact to make almond meals.  The almonds are then grounded into a meal. The fact that almond meal has the skin results in a coarser flour, with a brown and white speckled look.

However, I preferred to use almond flour to make my almond crust even though almond flour and the almond meal will both work for your pie crust.

Another note is that the almond flour crust looks similar to traditional pie crust with its beige crust and it has a lighter tender texture.

How To Make Almond Meal?

Almond meal is easier to make at home than almond flour from scratch, place dry raw almonds in a  food processor and process until crumbly.

How To Make Almond Flour?

To make almond flour at home you would have to first blanch the almonds, in order to remove the skin, dry the almonds then process into a high-speed blender.

You can also purchase already blanched raw almonds or slivered almonds to eliminate the process of blanching your almonds.

Yes! It is gluten-free. For those with celiac disease or wheat sensitivity, almond flour is a fantastic gluten-free alternative to wheat flour.

Almond flour, which is essentially powdered almonds strong in magnesium, can help lower blood pressure and regulate blood sugar. These qualities have a low GI, which indicates that they slowly release sugar into your blood to produce energy.

Almond flour has a lot of vitamin E, which is an antioxidant that is good for the brain. Getting adequate vitamin E lowers your chances of Alzheimer’s disease and other cognitive diseases.   It also aids in the prevention of serious illnesses like cancer, stroke, diabetes, and heart disease.

It is ideal for those with Celiac disease or gluten sensitivity. Also, almond flour is a good choice for people who like to stay fit and satisfied on the keto diet by getting the everyday flour substitute because it only has 3 g of net carbohydrates.

Almond flour is a popular alternative to wheat flour. It has a somewhat sweeter taste, is low in carbohydrates, and is filled with nutrients including dietary fiber, protein, and magnesium. In addition, almond flour may offer more health advantages (as listed above) than regular wheat flour.

Where To Buy Almonds Flour?

These are some of the most well-known brands of almond flour available in most stores.

Blue Diamond Almond Flour: This is my favorite brand, as it is unscented and affordable. Conveniently, a 3-pound pack is also available. A portion can be used easily, and the rest can be stored.

Barney Almond Flour: If You have to go to the store to get almond flour, you can get it here.

Bob’s Red Mill Almond Flour: I prefer Bob’s Red Mill’s almond flour and meal. However, they are, in my opinion, more pricey than other brands.

A Trader Joe’s Almond Meal is an excellent option for those who live near this store; it’s fairly priced and delicious. In some recipes, it can be substituted for blanched almond flour.

How Does Almond Flour Affect Baking?

The addition of almond flour to savory dishes imparts a particular richness in addition to a very subtle sweetness that is not enough to impair the flavor of the dish. The storage life of baked goods can be prolonged by using almond flour in the baking process because fat, which is added during this process, allow the baked good to retain moisture.

Keep an eye on anything you bake using almond flour since it browns and cooks faster than all-purpose flour. This also means that you should stick to the cooking temperatures specified in the recipe.

Why Is My Pie Crust Too Crumbly?

If the dough is crumbly and hard to roll, it’s likely that the crust is too dry. Increasing the moisture in the dough will help it become more cohesive. While working with the dough gradually include a few drops of ice-cold water (no more than 1 teaspoon at a time), making sure to handle it as slightly as possible until it is evenly moistened.

Why Does My Pie Crust Get Hard?

If your pie crust is hard instead of soft, flaky, and tender, you probably incorporated too much water. In this case, the only feasible solution is to dish a slice of pie and top it with a dollop of ice cream. Don’t worry about it; you’ll get it right next time.

Which Is Better, Butter Or Oil?

To make almond flour pie crust, I prefer to use vegan butter.

Vegan butter gives the pie crust its greatest flavor and creates light, airy, flaky layers. The flakiness is partially attributable to the butter’s water content, which evaporates and turns into steam while the pie is baking, causing the layers of dough to separate and rise. So, vegan butter is significantly more delicious.

That’s all for today!

Take some time to sit, dine, and enjoy life with one another. Make this Almond Flour Pie Crust, and let me know about your experience by leaving a comment on this post! … Have Fun Baking! 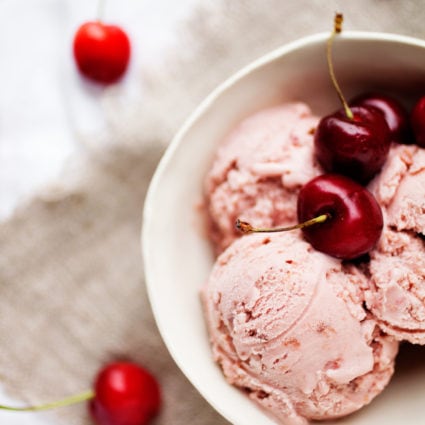 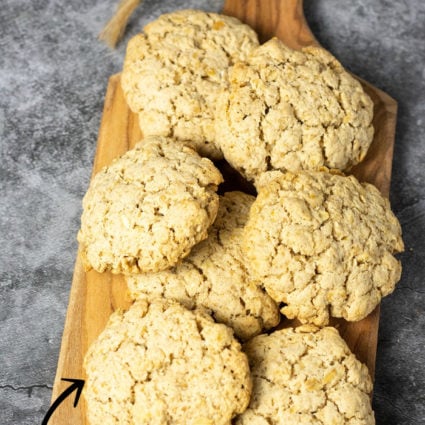 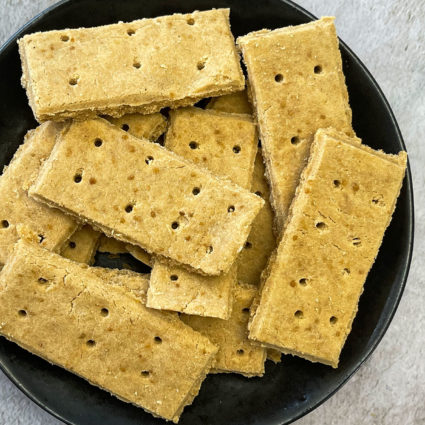