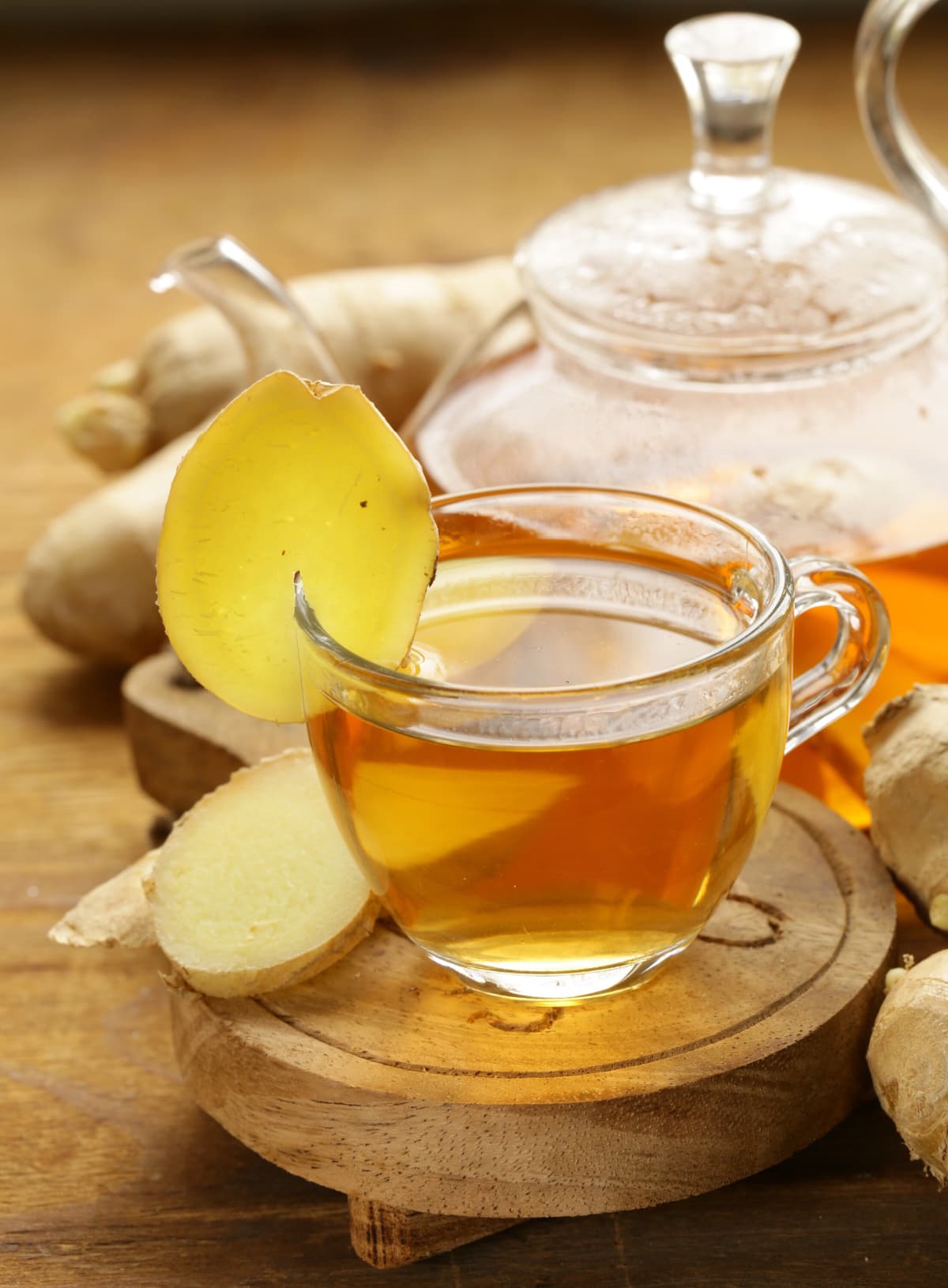 Ginger is a spice native to South Asia. It has been used for thousands of years as a flavoring and for its medicinal purposes. A popular use of this spice is for ginger tea.

It contains natural compounds like gingerol, an active ingredient attributed to ginger’s ability to fight disease and improve health and wellbeing.

While ginger can be consumed in different ways, ginger tea is the most convenient way to optimize the benefits it contains.

In this article, we’re going to discuss the various benefits of ginger tea and how you can make yours in the comfort of your home. 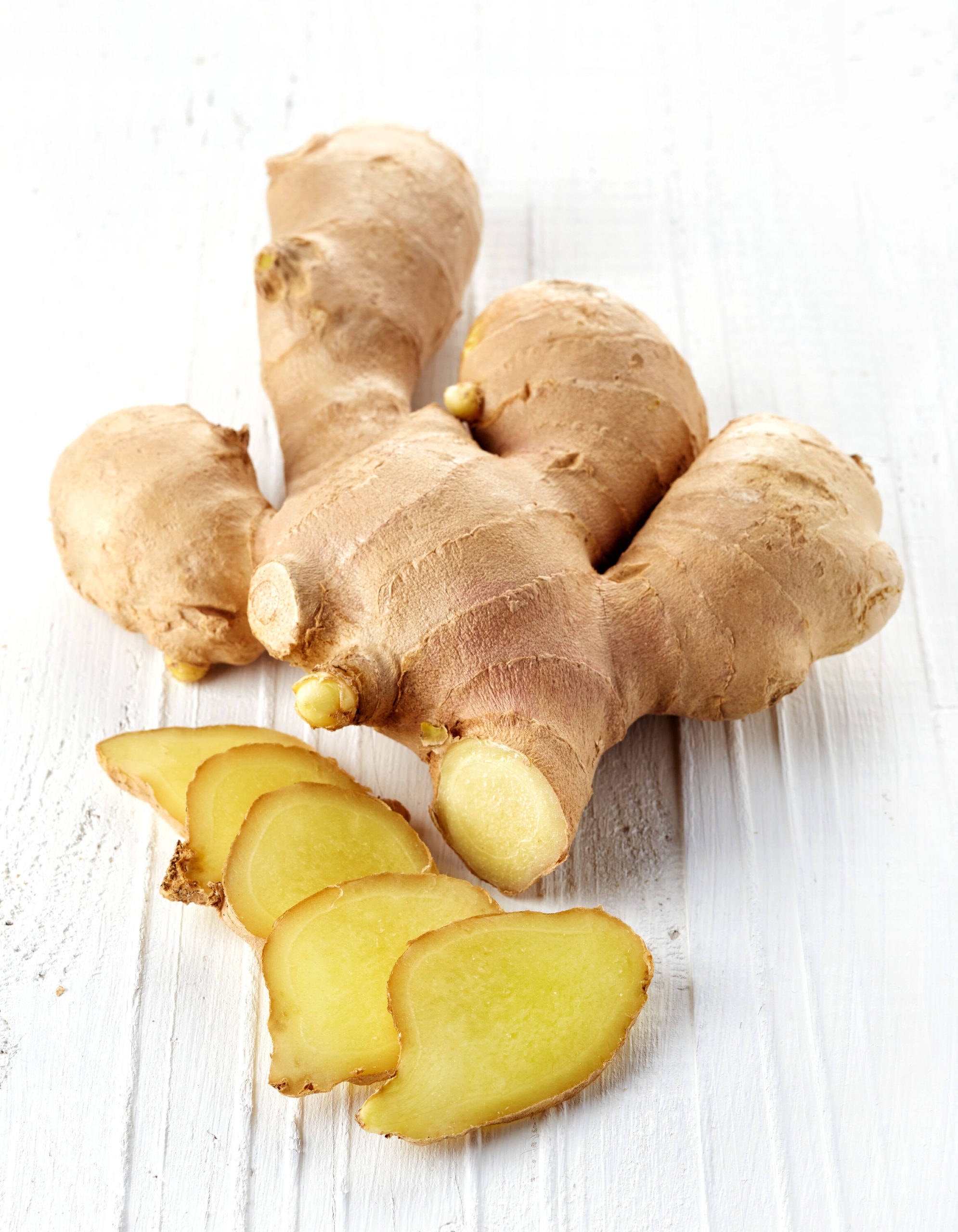 1.  It may lower blood sugar levels

In one study, consuming 2 grams of ginger powder daily was shown to lower fasting blood sugar and HbA1c (hemoglobin A1c) by 12 percent and 10 percent, respectively, in patients with type 2 diabetes.

HbA1c gives an average overview of your blood glucose levels for the past 3 months.

A 2019 review also found that ginger can effectively lower HbA1c in type 2 diabetes. This confirms that the compounds in ginger may be effective in controlling blood sugar levels longtime.

2.  It may lower cholesterol levels

In one study, consuming ginger significantly reduced LDL cholesterol by 10 percent in 45 days.

In another study, patients with hyperlipidemia that received 5 grams of ginger paste experienced decreased bad cholesterol levels by 17.4 percent in just 3 months.

3.  It may help fight cancer

The high gingerol content in raw ginger may be an alternative remedy for treating various cancers, including ovarian cancer, breast cancer, and cancers affecting the gastrointestinal system like colon, liver, and pancreatic cancer.

In addition, ginger contains other plant compounds like shogoals, and parasols that have been shown to offer anti-inflammatory, antioxidant, and anti-cancer benefits.

In one study, gingerol was shown to suppress colon cancer growth, while in another, it reduced pro-inflammatory signaling in individuals with a normal risk of developing colon cancer.

4.  It may improve brain function and protect against cognitive decline

Inflammation is the fueling force behind age-related cognitive decline and Alzheimer’s disease. However, drinking ginger water can help deliver the antioxidants and other compounds that prevent inflammation and counteract its effects on the brain. 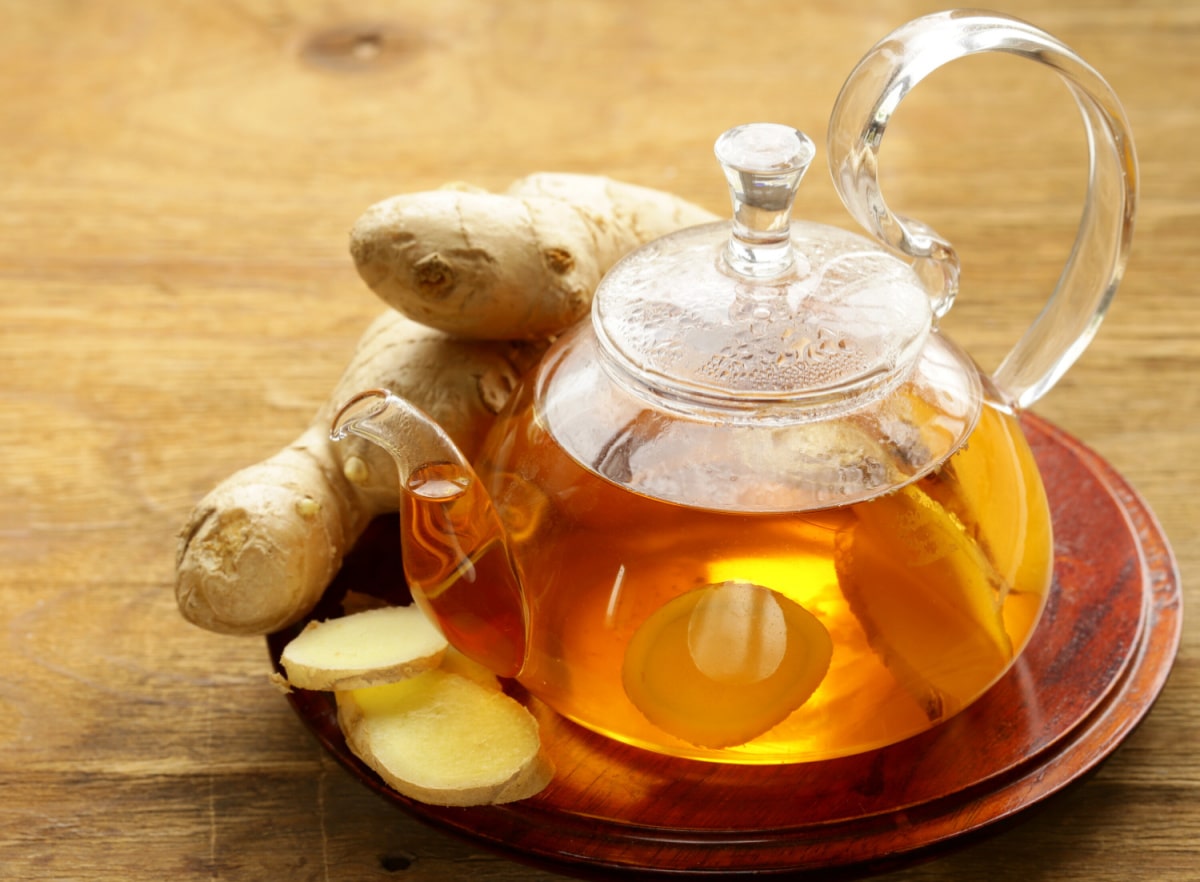 5.  It can fight infections

For instance, fresh ginger may help fight against the respiratory syncytial virus (RSV), a common respiratory virus that causes infections of the lungs and respiratory tract.

Ginger is also very effective against harmful oral bacteria associated with inflammatory gum disease, including periodontitis and gingivitis. Besides, ginger water may help fight bad breath and promote a feeling of freshness.

6.  It may significantly improve menstrual pain

Menstrual cramps occur when the uterine muscles contract due to the buildup of prostaglandins during the early phase of menstruation. Prostaglandins are pain-causing hormone-like compounds that control the processes in the parts of the body where they are produced.

A study published in the Journal of Complementary and Alternative Medicine found that consuming ginger extract may provide the same pain relief as Advil, a non-steroidal anti-inflammatory drug often used to relieve menstrual pain.

Chronic indigestion is characterized by recurrent discomfort or pain in the upper abdomen. It can be caused by delayed gastric emptying, gastroesophageal reflux disease (GERD), gallbladder disease, or ulcers.

Ginger has been shown to speed up the rate at which your stomach is emptied, thus relieving indigestion.

In one study, patients with functional dyspepsia (indigestion with no known cause) were given either a ginger supplement or a placebo, and they had soup after an hour. The ginger group took 12.3 minutes for their stomachs to empty, while the placebo group took 16.1 minutes.

But keep in mind that chronic indigestion is often a sign of an underlying condition, not a condition of its own. Make sure you get checked out, so you can receive proper treatment and management.

The effect of ginger on improving gastric emptying has also been shown in healthy individuals without indigestion. This shows that regular intake of ginger can help maintain a healthy gut, or improve gut health in a not-so-healthy one.

8.  It can alleviate nausea and prevent vomiting

Ginger was traditionally used as a natural way to calm an upset stomach or reduce nausea.

According to research, ginger may benefit a wide range of nausea and vomiting causes, including pregnancy and chemotherapy-induced.

Furthermore, ginger may be as effective as some anti-nausea medications but without side effects. 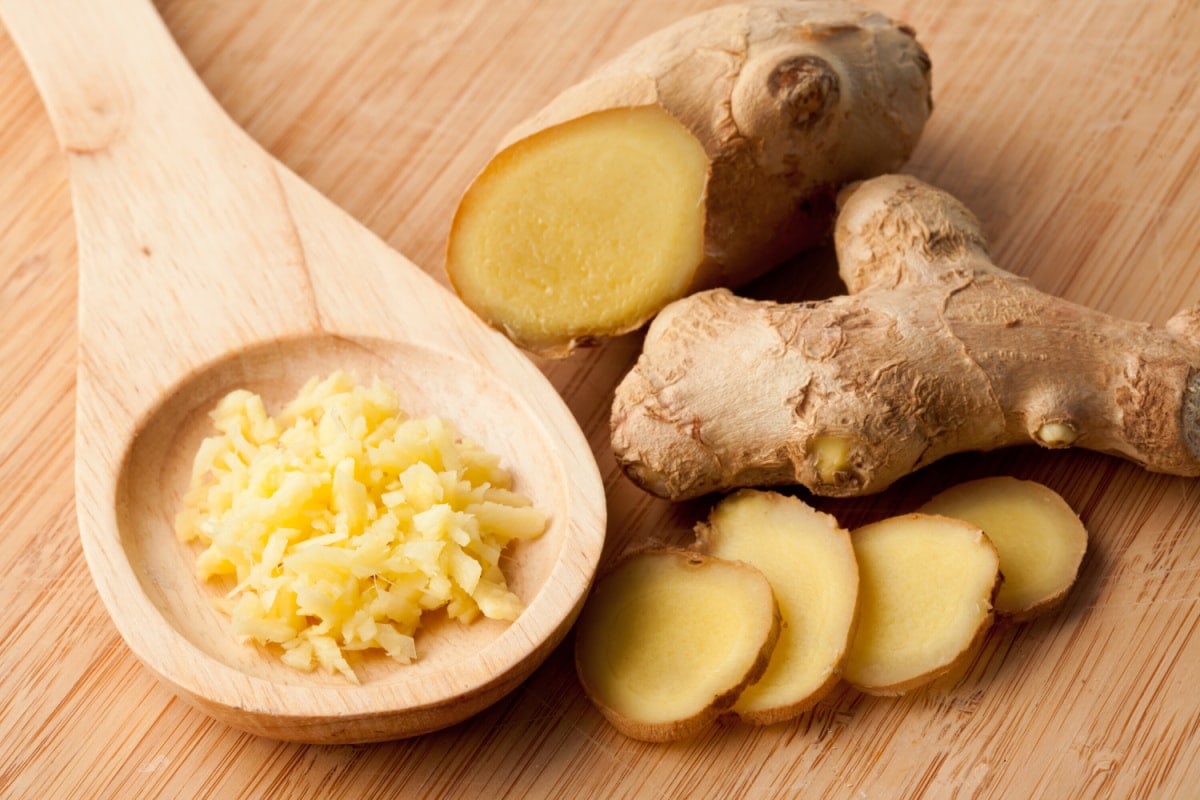 How to make ginger tea?

The method is pretty easy:

Some people may add some sweetener, lemon juice, and/or mint to enhance the taste. This tea is totally customizable!

How much ginger should I take daily?

Experts recommend taking 3-4 grams of ginger daily. This is equivalent to 1 teaspoon of grated raw ginger, or ½ teaspoon of powdered ginger, or 4 cups of steeped ginger water. 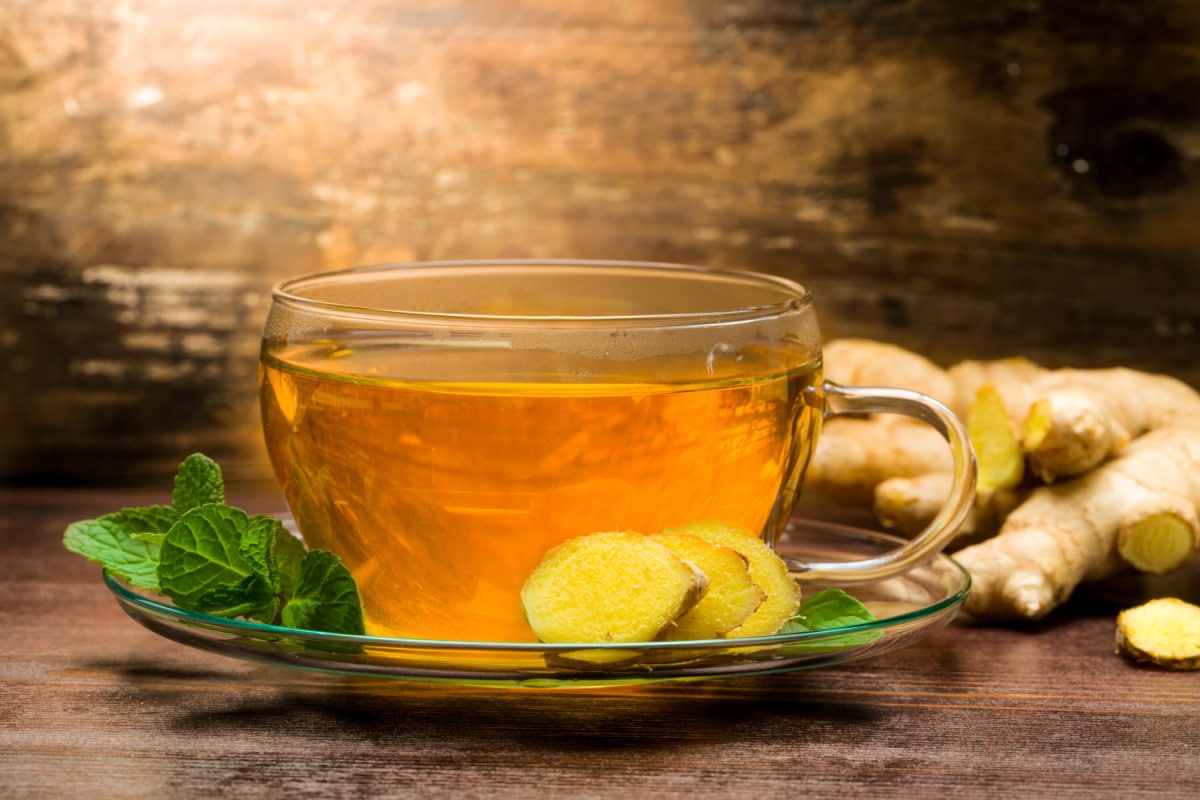 Hi there, I’m Dev, Chief Editor here on Healthier Steps, a Jersey girl now residing in Florida, and a first-generation Jamaican immigrant. As a passionate foodie adventurist, I love to create comfort dishes using exotic ingredients from all over the world.

View all recipes by Dev Marie →
You May Also Like 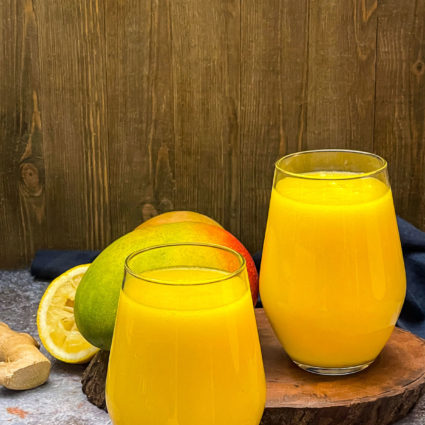 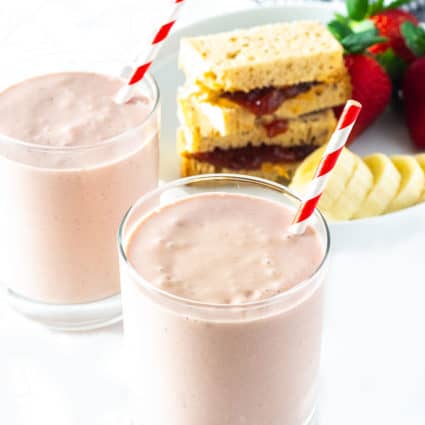 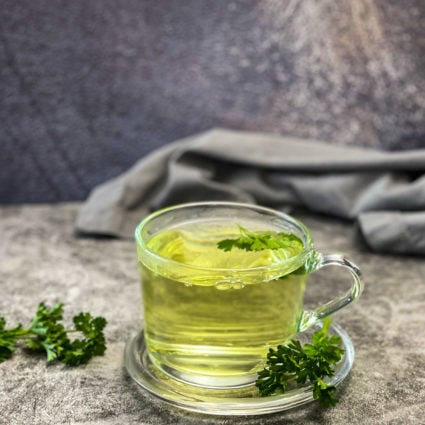