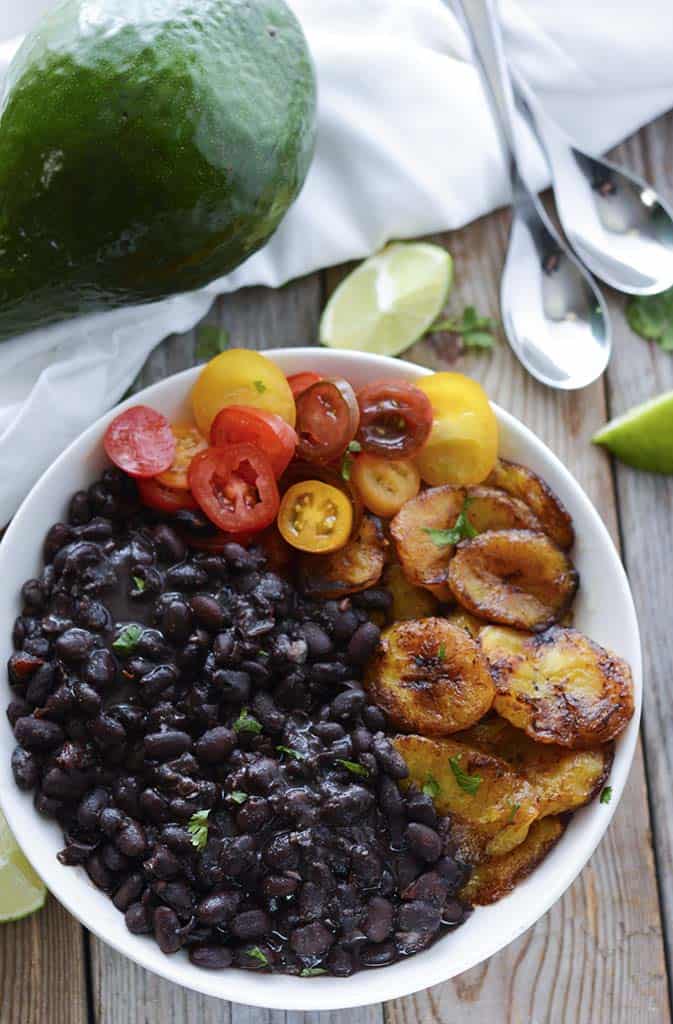 This vegan feijoada (stew of black beans from Brazil) is a plant-based adaptation of a classic Brazilian dish. The ultimate comfort dish, veggie feijoada is delicious, incredibly healthy, and comforting.

Vegan Brazilian Black Bean Stew is my version of this traditional dish that is served throughout Brazil. It has now become a family favorite that is so quick and easy to prepare!

I always prepared my beans with a Caribbean twist by adding coconut milk, spring onions, thyme, and allspice to it until a Brazilian friend came to my home for a visit about 14 years ago and prepared her version and I was sold.

She added an entire bulb of garlic, bell pepper, and onion to the beans and cooked them until they were tender. She then seasoned the beans with aromatic cumin and oregano.

My friend didn’t measure her ingredients while we talked and enjoyed each other’s company.  I was so curious to see how the beans would turn out. I was so impressed with the results, that I have been making variations of it since then. The beans were so creamy and delicious ♥

The traditional Brazilian black bean stew (Feijoada), is usually made with black beans and various salted pork and beef products. It is traditionally served with farofa, which is a toasted yucca meal.

This stew traditionally takes anywhere from 2-3 hours to cook, but the vegan version takes less than half the time. So if you want to save time and still get the benefits of a rich protein dish, then my Vegan Brazilian Black Bean Stew is your answer.

Black beans are a great source of protein, calcium, folate, and fiber.  We are always concerned as vegans if we are eating enough protein. Yet, I have never met anyone here in the USA who is protein deficient, have you?

Here is a list of some of the other benefits:

As always, I suggest you read the complete article for useful information. However, you can find the detailed recipe with exact ingredients and step-by-step instructions below.

Brazil’s national food is feijoada, which is pronounced fay-jwah-dah.

The name is derived from the word feijo, which means bean, a key element in the dish. Traditionally eaten with rice, collard greens, and farofa, this hearty slow-cooked stew features black beans, salted beef, and pig (toasted manioc flour).

When it comes to the dish’s origins, the most widely accepted theory holds that it was developed by slaves in Brazil using leftovers from their masters, including pig’s feet, tail, and ears.

Well, there are some flaws with that theory. First, back then, the head, tail, and paws of a pig were considered delicious and wouldn’t have been thrown away so easily.

In actuality, stews were widely consumed throughout Europe. Food scarcity was prevalent from the 16th through the 18th centuries. There could be no waste, because Cassoulet, Cocido Madrileo, and Fagiolata were frequent dishes produced by combining a variety of inexpensive ingredients. 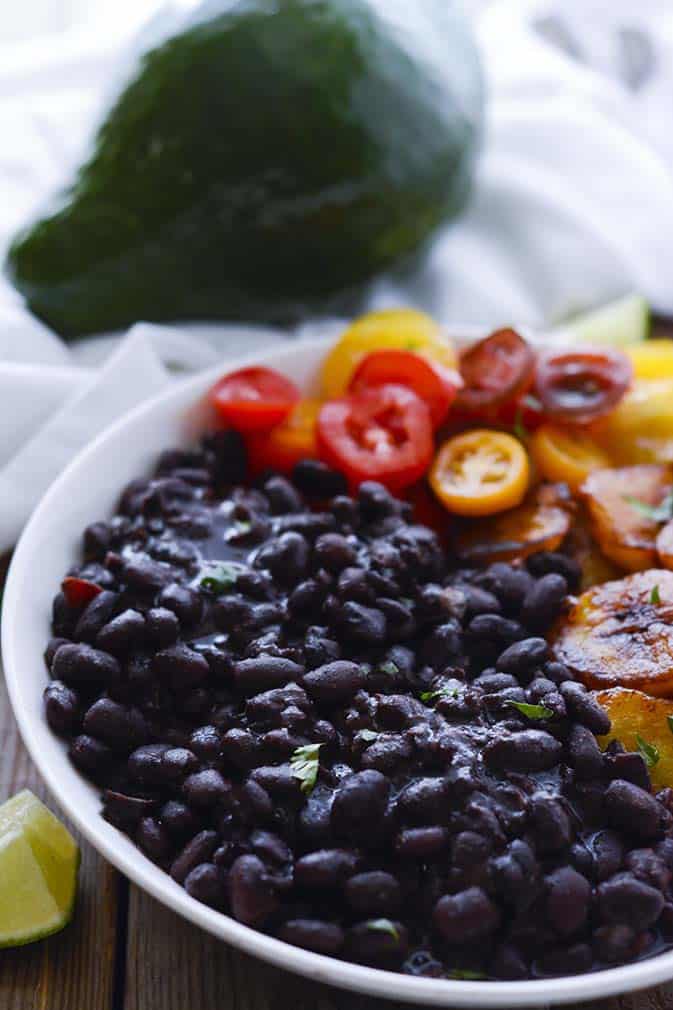 In an airtight container, leftovers can be stored for up to three days in the refrigerator.

Take it out of the fridge and reheat it on the stove or in the microwave. You might need to add some water.

This vegan Brazilian Black Bean Stew can be stored in Ziploc bags or freezer-safe containers for up to three months.

Check out these additional warm and comforting stews: ‘

Can I Make Feijoada With Canned Beans?

The essential component of the traditional Brazilian feijoada is black beans, and the recipe frequently includes raw dried beans. That’s because they must simmer gently until a thick stew is formed and the liquid has decreased.

Although this method produces a thicker soup, it may be fairly time-consuming because the beans must be soaked overnight and then simmered for at least forty minutes.

You can use canned black beans in this recipe instead of the traditional feijoada for a speedier alternative.

If you’re using canned beans, don’t toss out the brine liquid; instead, add it to the soup. Due to the high starch content, it will aid in soup thickening and also offer more flavor.

If you want to use dried black beans, soak them in a bowl of water at room temperature for at least four hours.

Which Vegetables Can I Use In This Stew?

Greens and veggies are frequently offered as a side dish rather than being cooked with it.

The soup was made with delicious veggies, such as bell pepper, cilantro, and bay leaf in this vegan-friendly variation.

Other delectable vegetable options for your Brazilian feijoada are:

When Is A Good Time To Serve Stew?

Traditional Brazilian stew can be served at any time of day or night, in my opinion. However, I believe that when prepared at family gatherings in the fall and winter, it tastes the best.

What To Serve With This Stew?

Serve rice and orange slices alongside these Brazilian black beans. Kale is frequently offered with this dinner, either steamed or stir-fried.

Slices of orange are said to help with digestion. The hearty stew is well refreshed by the sweet and juicy oranges. Therefore, when preparing this dish, be careful to test the entire combination of rice, stew, greens, and orange. You’ll adore it, I’m certain.

Owing to its high carbohydrate content, black beans should be avoided on a typical ketogenic diet. Low-carb bean substitutes like green beans, on the other hand, can be consumed in moderation.

That’s all there is to it!

Give this recipe a try. It’s incredibly delicious and super easy. I hope you like it. As always, I would love to hear from you. So if you tried this recipe or any other from my website, please let me know how it turned out in the comments below! 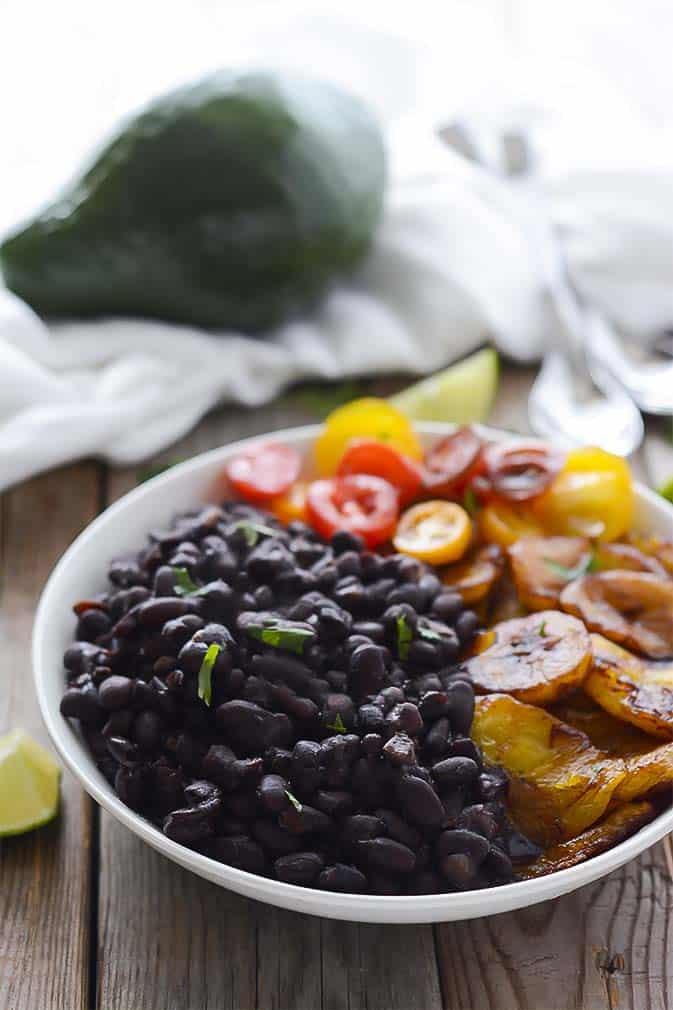 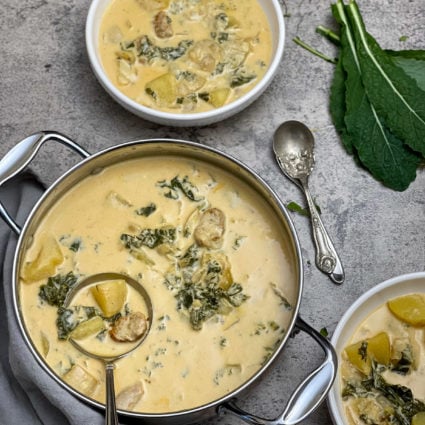 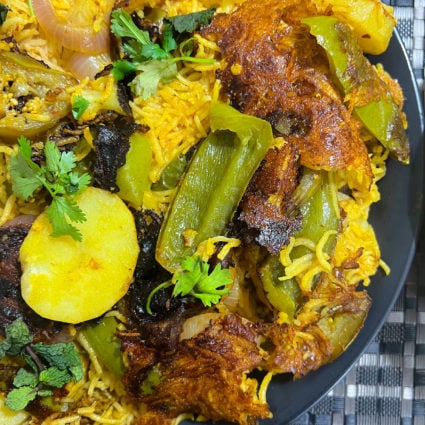 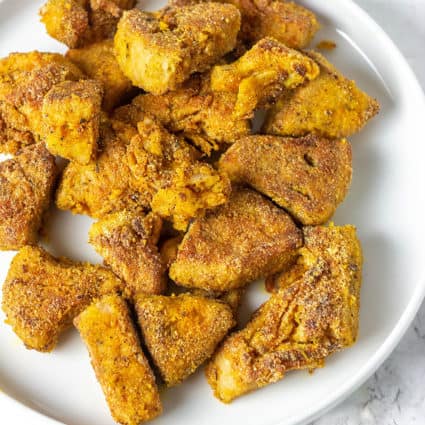