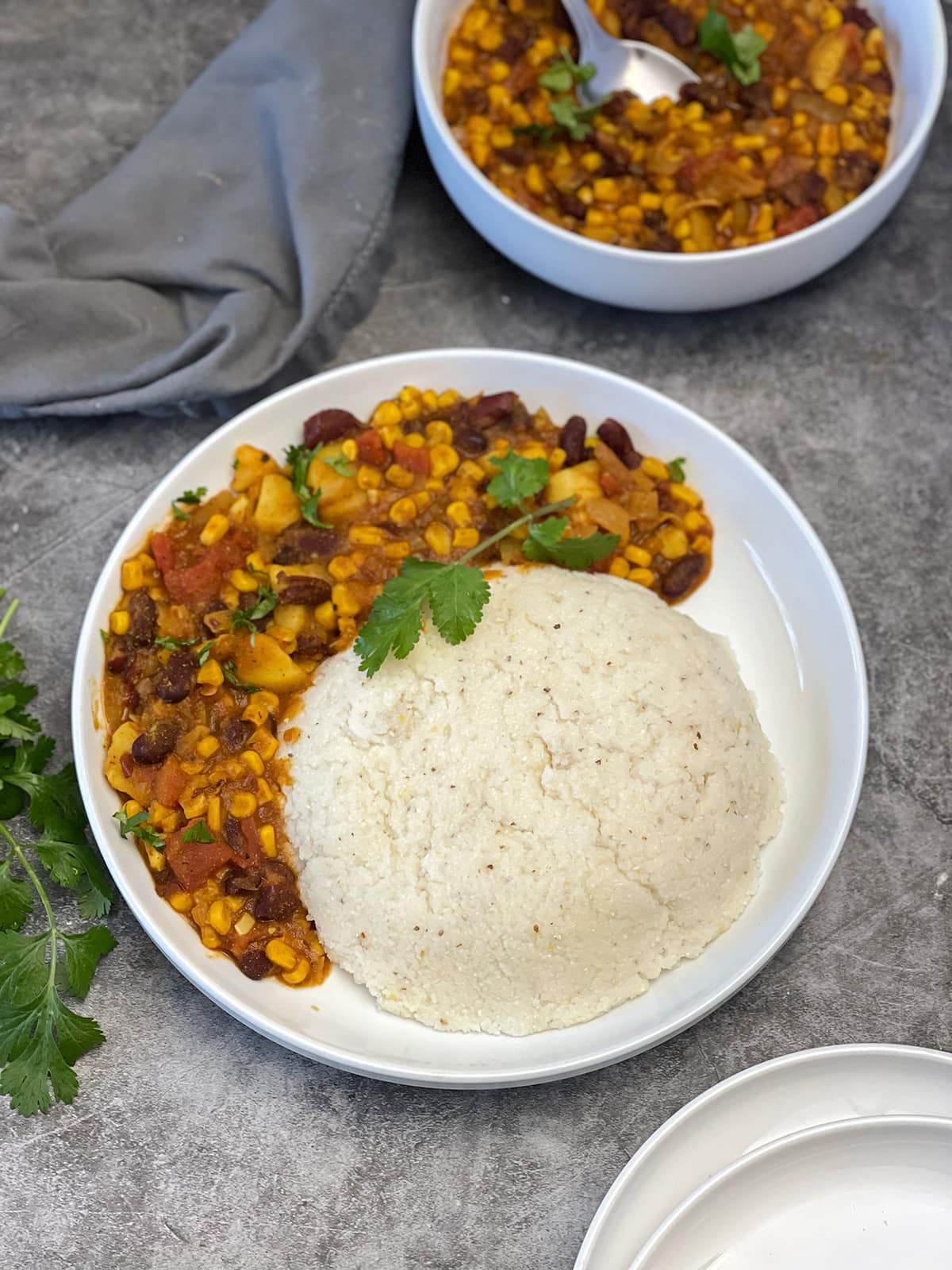 There are many ways to make this dish, but this ugali recipe is made from coarsely ground cornmeal into mush that is served as a side dish. This hearty side dish is a popular meal in Africa, particularly sub-Saharan Africa, and is usually served with a rich and flavorful stew.

This dish is prepared basically from coarse cornmeal and it is quite similar to polenta. It is a very easy process to prepare ugali for a meal as the process is simple and less time-consuming. The ease of preparation is one factor that highlights the popularity of this dish.

You can also try Jamaican Cornmeal Porridge or Vegan Grits!

The time origin of ugali is not clear but can be assumed to be due to crop farming, which is the most common among the African people. Farming has been an important source of food for many generations. A variety of crops were planted including corn, sorghum, and millet, among others.

This must-have necessitated innovation into methods of consumption of these crop products. The Portuguese invasion of east Africa introduced maize crop which became a popular crop ahead of the common sorghum and millet.

Other names for ugali:

A notable factor in the popularity of ugali is the introduction of mills that eased flour and consequently increased the supply of maize flour. This recipe was given to me by one of my Kenyan readers Angie, the recipe is quite similar to my Vegan Grits Recipe, Turn Cornmeal, and Jamaican Cornmeal Porridge, she also was kind to share with me Vegan Cassava Leaf Soup. 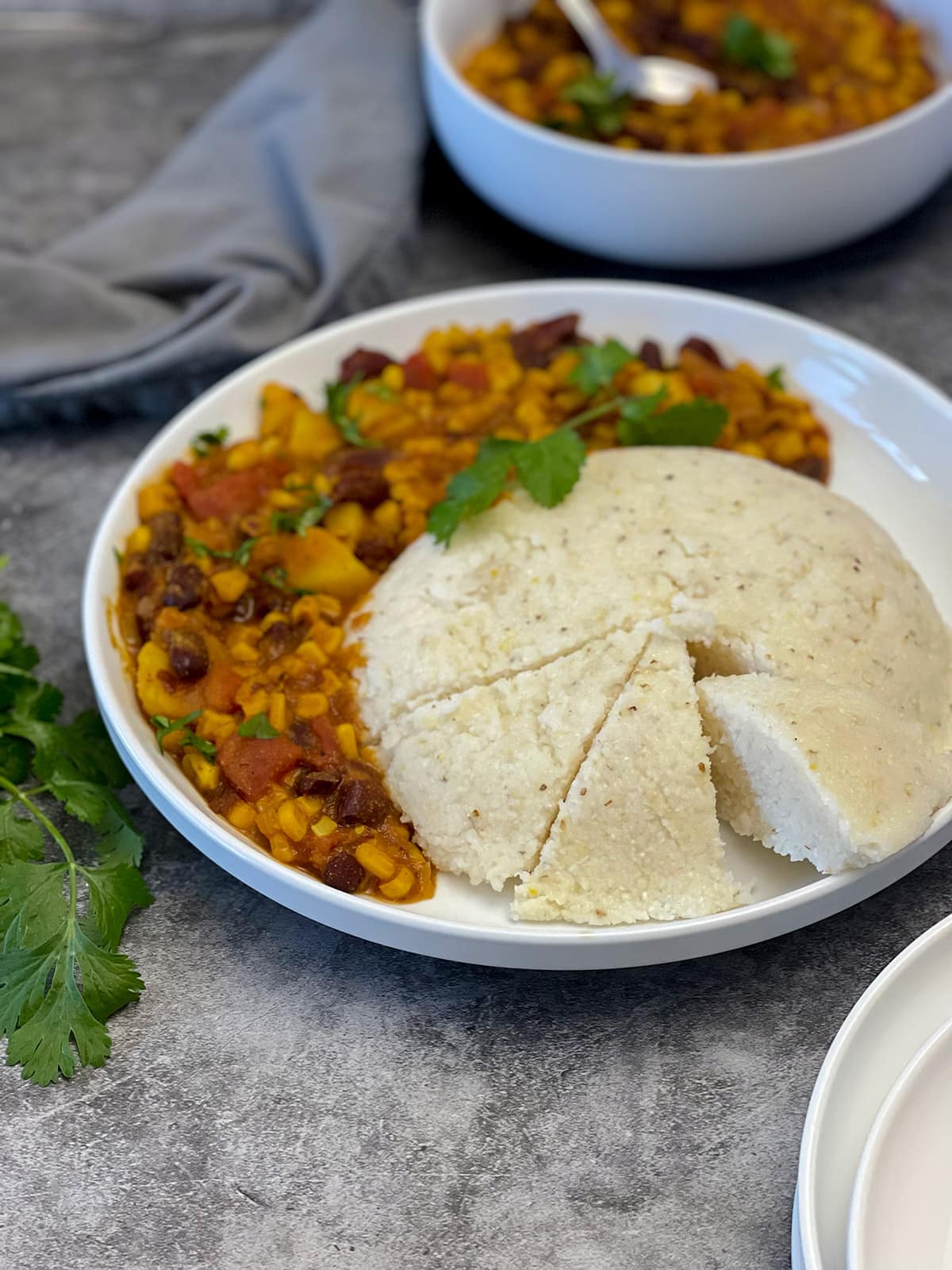 Is fufu and ugali the same?

Ugali is made from maize meal, it is stiff and dense. Maize meal is added to boiling water and stirred until it comes together in a stiff ball. I find ugali to be denser than Fufu. Fufu is made using other starches like Cassava, Plantain, Malanga, Sorghum, Millet, depending on the country.

Basically, if the starch is a vegetable then it is peeled and chopped into small pieces. It is pounded or processed in a blender with a little bit of water, then it is processed until smooth in the blender. It is then cooked in a pot over medium to low heat until the fufu is cooked, about 5-7 minutes. When it is finished cooking, it is very smooth and silky.

Where can you buy maize meal?

You can purchase maize meal in African stores, white grits in the health food store, or maize meal online here.

The ingredients are very simple, just two ingredients to make this hearty feast. Coarse cornmeal and water. Traditionally salt is not added, it is usually served with a flavorful and well-seasoned stew, however, feel free to add salt to taste.

Water – use filtered water, bring to a boil in a pot. I love to use a good non-stick pot for this recipe.

Cornmeal – use medium to coarse cornmeal for most authentic results, however, any cornmeal will work. Adjust the cooking time accordingly. It took me 10 minutes to achieve a cooked stiff ugali. Also, it is best to use white corn for an authentic result, however, if all you have is yellow then that’s fine. 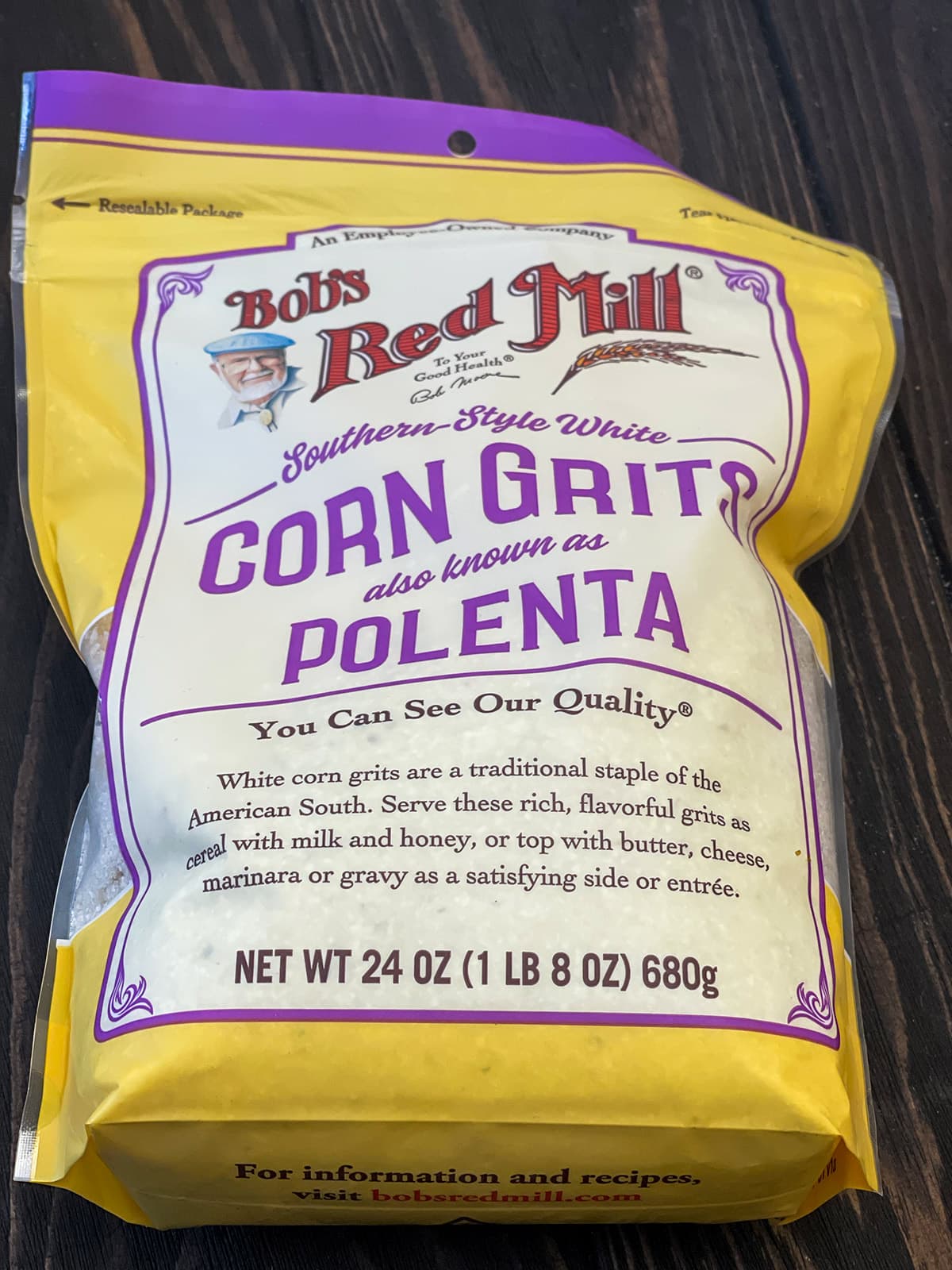 Is ugali similar to grits?

Yes, ugali or maize meal is very similar to grits, they are coarse ground cornmeal that is cooked like porridge. However, in Kenya, they use white corn white here in the USA, both white and yellow corn is used to make grits.

Grits originated from the Native American Muskogee tribe, who resided in the Southeastern USA, they grounded whole dried corn using stone into coarse gritty cornmeal similar to hominy or maize. They served their corn grits to the colonists where it became popular. Today, it is the official state food of South Carolina.

There are four varieties of grits on the market, quick cook, instant, stone-ground, and hominy. Grits are made from a variety of corn called dent corn that has a higher starch content and are less sweet than regular corn, which results in more creamy grits. I used traditional stone-ground variety.

How to cook ugali?

Preparation of ugali is a really easy task. There are probably no other ways that deviate from this conventional method. It is fun to make ugali, but often, people feel like it’s tiresome, and they end up baking it instead. Baking deviates from the original method of preparation, which is not cool, just kidding!

The time of cooking ugali depends on the volume cooked and the heat used. The larger volume will require more time and the smaller volume will need lesser. With average heat and using 2 cups of water, the approximate time for cooking will be about 12 -16 minutes. 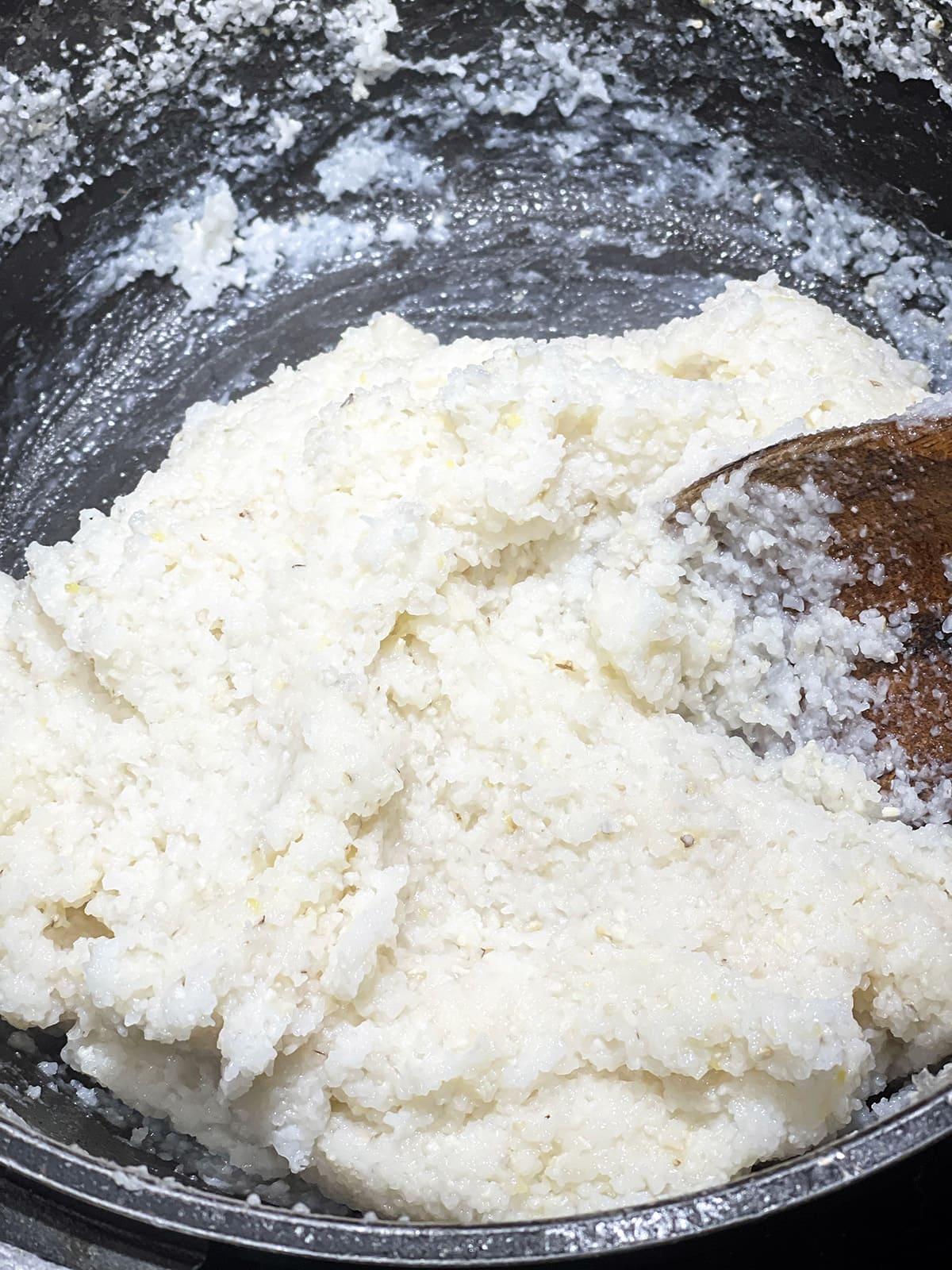 What to eat with ugali?

Although ugali has no fat content, it suits well to serve while moderately hot. The meal does not have a significant smell or taste when consumed solely.

To enjoy your ugali meal, a suitable combination will make it soothing. Luckily, the meal allows a variety of combinations which includes vegetables and kachumbari, prepared using tomatoes and favorite greens, that are raw.

Ugali has a few varieties which depend on the flour used. The common type is maize flour whose outcome is a pale white with no pronounced taste. If millet flour is used the color is grey and the taste varies.

The sorghum and millet kinds are alike in color but sorghum has quite a sharper taste. For the three varieties, the nutrient content varies accordingly. When millet and sorghum flour is used, fresh milk can as well be a good combination.

Nevertheless, a combination of flours has gained popularity in an ambition to create a nutritious ugali. Combining maize and wheat or sorghum flour is a popular idea that gives the qualities of both portions. Another classic combo is cassava flour with the apportioning of maize flour.

To obtain cassava matrix, peeled cassavas are chopped into small pieces and dried then later mixed with dried corn and milled as is practiced in Africa. These are some notable practices among the major consumers.

From the formulation content, ugali majorly has a high contribution in carbohydrate content to the human body. Besides the nutrient, there is also vitamins A, & C, and high fiber content that is useful in digestion by preventing constipation.

Sorghum and millet varieties have calcium, copper, iron, magnesium, phosphorus, potassium, and selenium that have various uses in the body including the development of strong bones.

The cassava variety allows a consumer to get cassava nutrients in the very great comfort alongside the carbohydrates. Consumption of large amounts may not particularly cause obesity, but moderation should be observed. 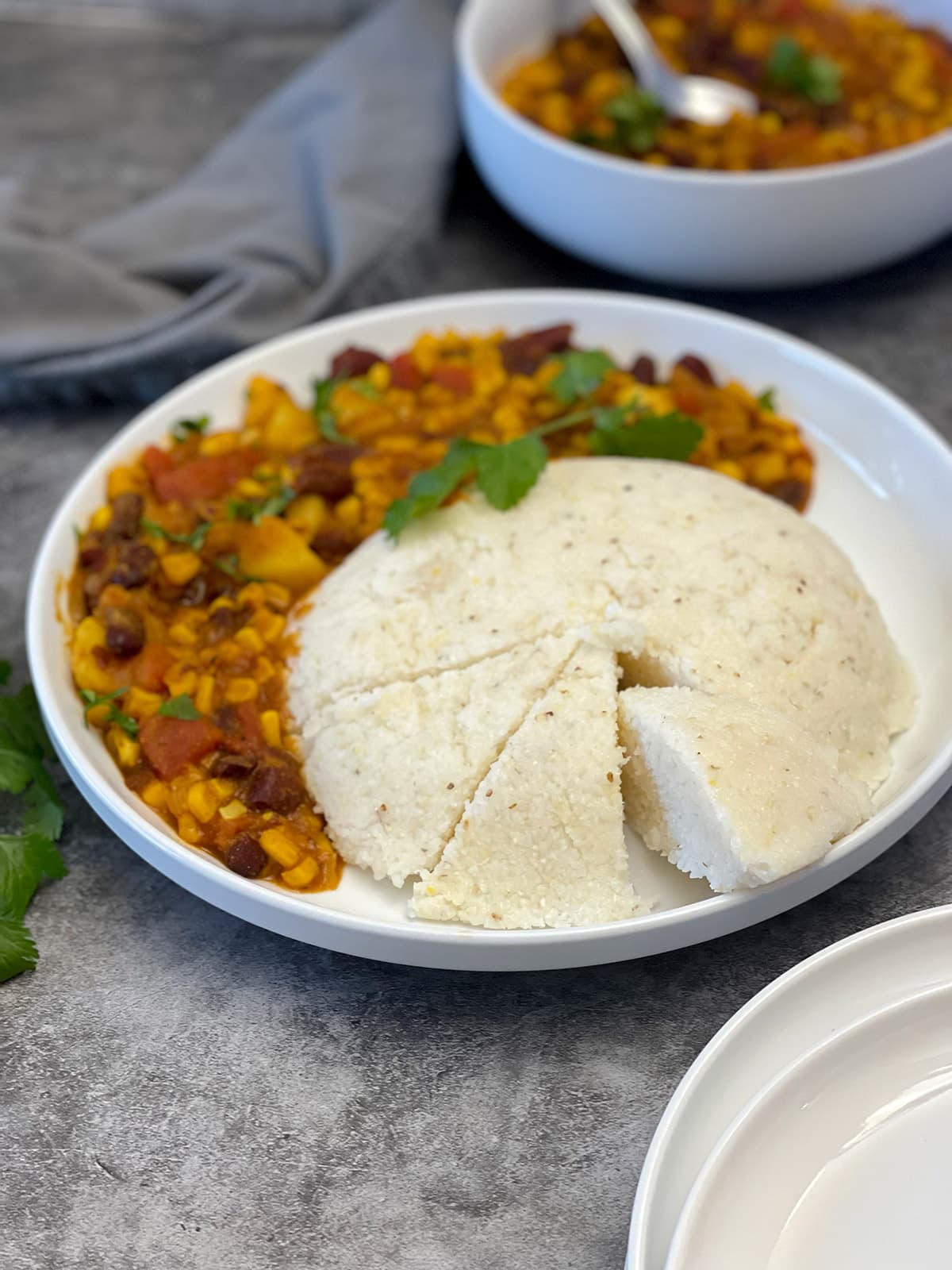 Economic value of maize and other starches:

All over the world, there is cheap and available corn, millet, and even cassavas. The present ease of access to the flour when other commodities are either not available or expensive.

In the African pattern, ugali can be recooked when it remains from a previous meal and has not gone bad. Also, the rate of disintegration is low and can sustain, just beyond a day after being served. The ability to not go bad easily presents an economic value on the circumstances. The meal generally saves the pocket and may allow saving culture.

When to eat ugali?

Being a heavy meal, ugali is generally preferred in supper time. It is noted that when consumed in a sizeable amount it leads to reduced activity as most energy is used in digestion. If consumed in the morning, one might end up dozing off, if seated, especially on a hot day.

To best reduce the effect, it’s better if consumed in the evening when no one will then go on to sleep. There is a very minimum probability to develop side effects like allergy as there are no particular additives.

Where is ugali from?

As earlier indicated, ugali has major application in sub-Saharan Africa and arguably Africa at large. This is owing to the initial interaction with the Portuguese conquering the east African coast.

In the region, the meal is widely served with a combination of vegetables. Due to migration, the use of ugali has found a new group of people as registered in Nigeria South Africa, and some parts of the United States.

Kenya is one country in the East African region that uses the meal with so much joy. With the variety of people in it, there are several names for ugali. In Swahili, the name is sima or ugali, in the country’s (Kenya) western region its name is obusuma, kimnyet, and kuon. Several other names, pap in South Africa, sadza in Zimbabwe, and shima in Malawi.

The bottom line on my ugali recipe:

Ugali is a delicacy that will leave you and your family satisfied for a very long time. It is advisable that someone accompanies it with a stew of vegetables and get glass water on the side.

The article has offered the procedure in detail while ensuring the importance and nutritive values are discussed. 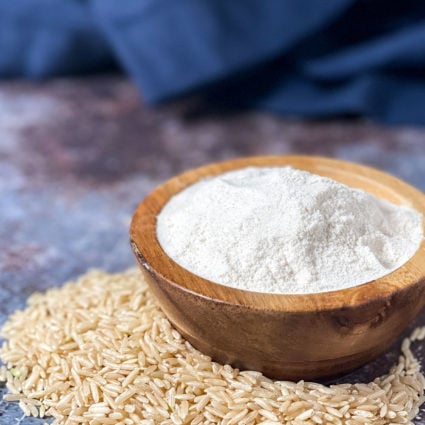 How To Make Brown Rice Flour 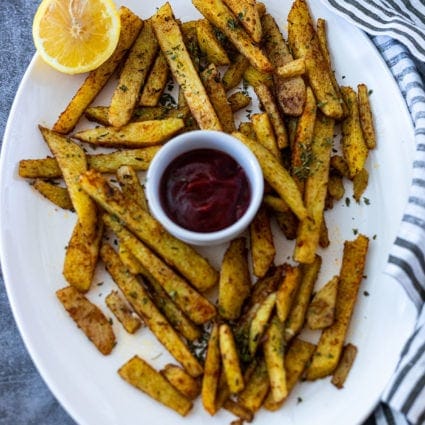 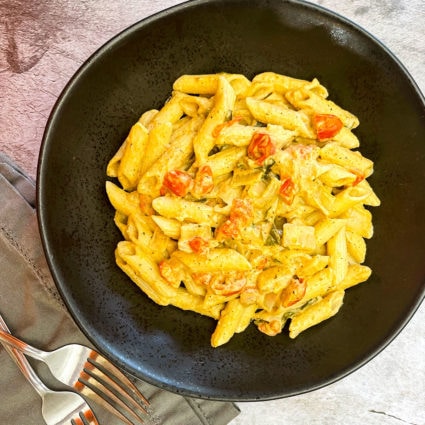