This flavorful gluten-free Vegan Pot Pie is simply amazing, made with carrots, potatoes, green beans, and jackfruit, seasoned with herb-infused broth. It is perfect for the holidays! 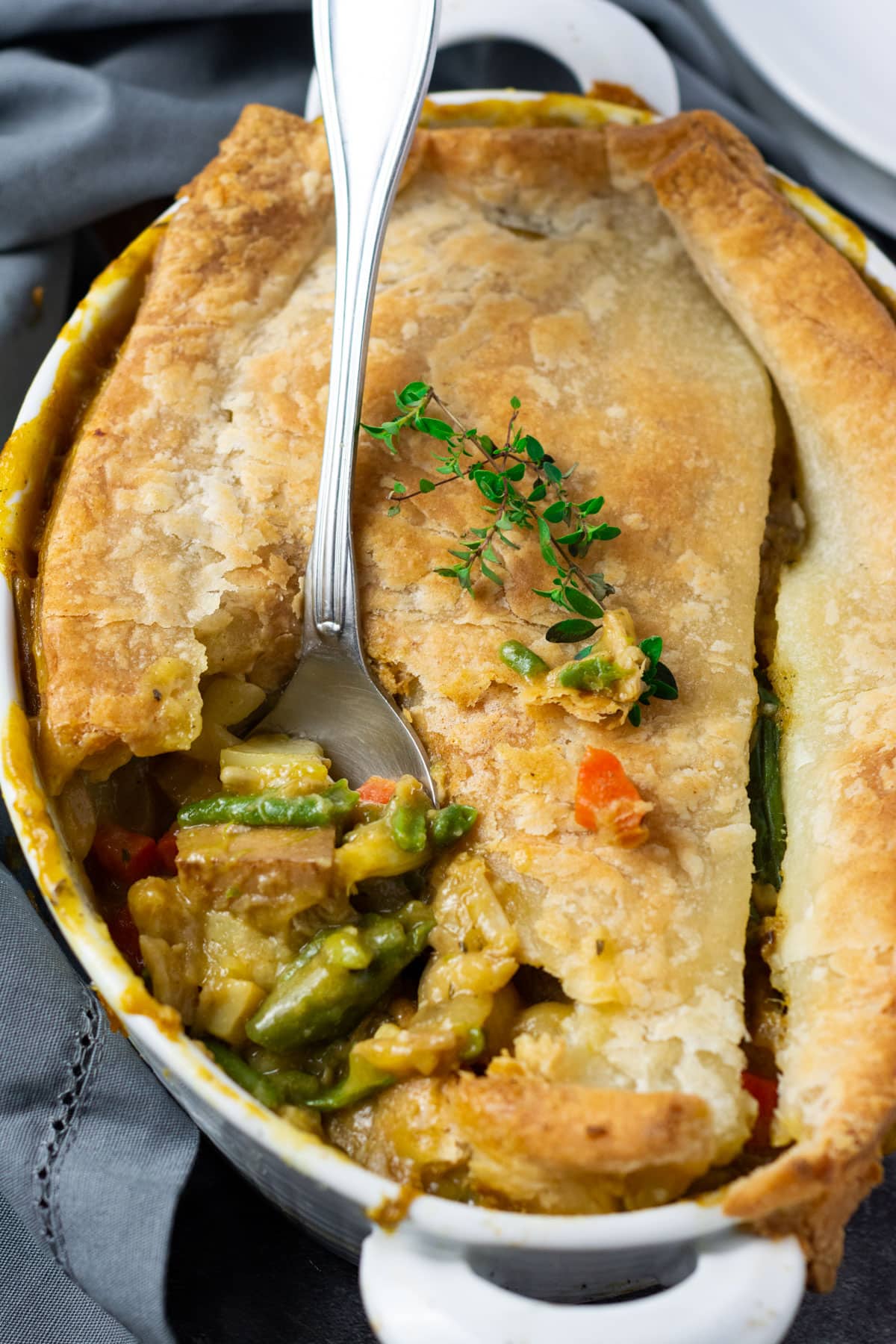 This vegan pot pie is the perfect comfort food, a warm and hearty dish loaded with veggies for anything from a weeknight meal to a holiday dish.

Top your gluten-free pot pie with a homemade Gluten-free Vegan Pie Crust, or your favorite store-bought vegan puff pastry for a delicious vegan chicken pot pie that your family will love.

My love for pot pies goes way back to when I was 16, in my pre-vegan days. I lived for six months with my brother’s in-laws in England.

During that time, his father-in-law worked for a pot pie factory. Because of him, I was introduced to different quintessential British pies, such as Steak and Kidney Pie, Chicken Pie, and Bramble Apple Pies.

If you can’t find green jackfruit or you don’t prefer it, then you can substitute the jackfruit with marinated tofu or store-bought vegan chicken substitute. Or, you can just leave it out; it will taste just as delicious.

For the top, I used Schar’s gluten-free vegan puff pastry, which I purchased from my local health food store. 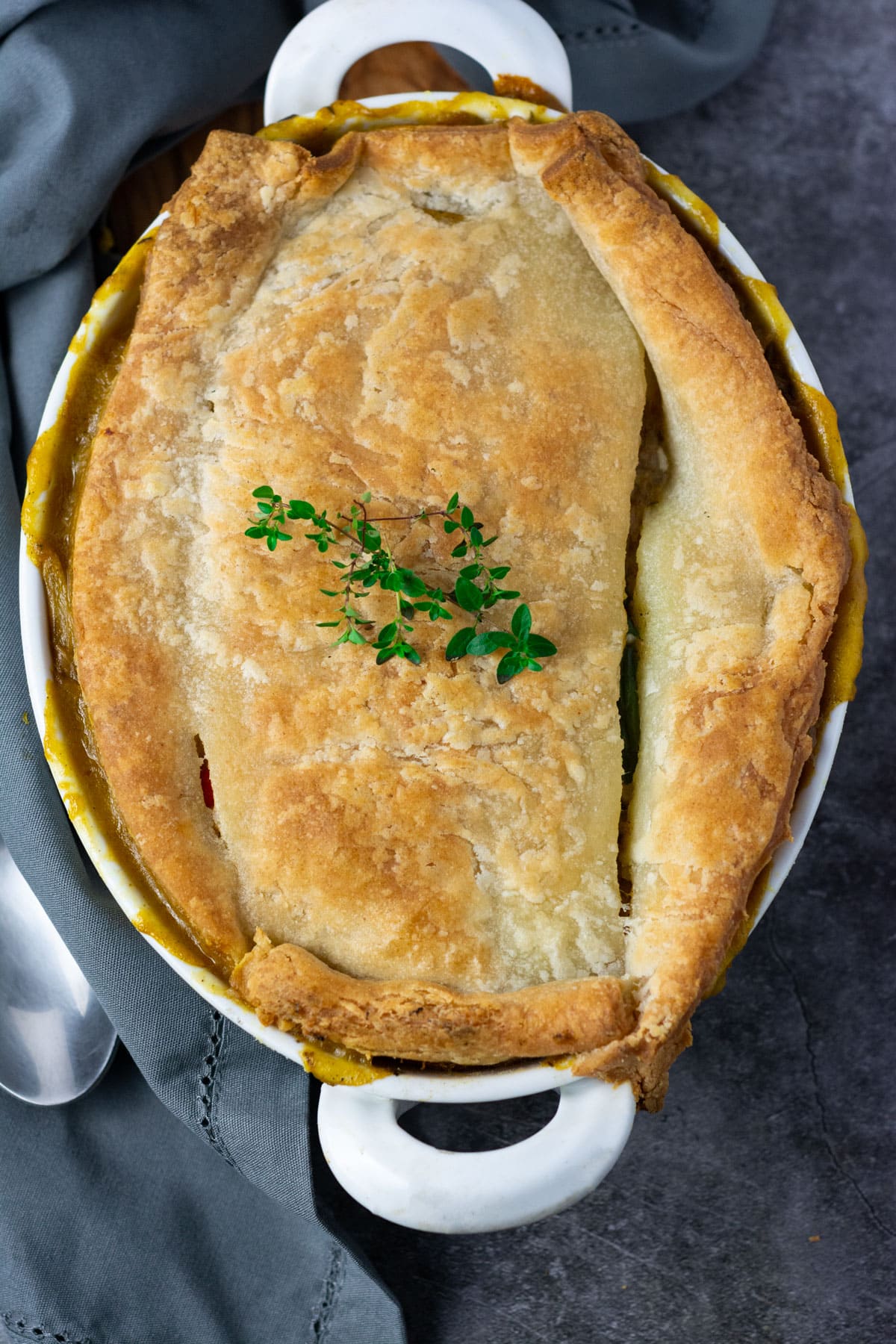 If you are from a tropical country or are familiar with one’s cuisine, you might have heard of jackfruit, or its cousin, breadfruit. It is a massive awe-inspiring fruit, that can weigh up to even 80 pounds.

The flavor of the ripe fruit is described by most as being a cross between pineapple and banana. It is a pleasantly mild but sweet fruit.

The seeds are also edible (after cooking), and downright delicious. They can be roasted and eaten as a snack, or used in dishes such as Jackfruit Seed Curry.

When jackfruit is still green, it has a very neutral flavor that takes on whatever you season it with. The texture, when cooked and shredded, is akin to pulled chicken or pork. It is one of the most convincing meat substitutes, perfect for non-vegans.

Where To Buy Jackfruit?

Fresh green jackfruit can be purchased from a local Asian or Latino Supermarket, and you can find instructions HERE on how to prepare the jackfruit from scratch. You will have tons of leftovers that you can freeze and use in recipes to come.

However, for convenience’ sake I bought green jackfruit in the can. The easiest and most economical source will still be your local Asian or international market. They are also now sold at Trader Joe’s. Make sure you get the green jackfruit in brine and not the ripe jackfruit in syrup, as the texture and taste are completely different.

What Are Nutritional Yeast Flakes?

When one mentions yeast, you will usually think of the tan granules used to make bread and other wheat based bread products. However, nutritional yeast flakes are something completely different.

Although all three common yeasts are made from the same species, unlike brewer’s and baker’s, nutritional yeast is not left alive. It doesn’t have the same function as those, and is manufactured specifically to be for food.

Nutritional yeast adds an umami, savory or cheesy flavor, making it one of my favorite seasonings to add an extra “something” to my dishes.

But just like many of my ingredients, it is secretly a powerhouse. Nutritional yeast flakes contain all nine essential amino acids that you must intake, making it what is known as a complete protein. This can be rare, especially for vegans, making it an easy way to make sure you have no deficiencies.

Moreover, it contains vitamin B12, and other B vitamins in fact. Vitamin B12 is most commonly found in eggs, dairy, or meat, meaning that many vegans have a B12 deficiency if they aren’t careful.

Being deficient in vitamin B12 makes you feel sluggish and mentally foggy, which can be quoted as the reasoning for why some people’s vegan journeys fail. Adding nutritional yeast to your diet is extremely easy, as it can be added to most savory dishes quite easily, possibly eliminating the need for expensive supplements.

What Is Bragg’s Liquid Aminos?

Liquid aminos, like soy sauce or tamari, is made with soybeans. It adds the “umami” or savory flavor profile that is essential to adding depth for many recipes. I also use it in place of some salt, since it not only adds saltiness but also flavor.

Liquid aminos also has the amino acids that are present in soybeans that are necessary for vegans to eat. I love ingredients that improve my food while also adding nutritional benefit.

Unlike many common soy sauces, Bragg’s liquid aminos is gluten-free. I love using it for this reason, I never need to check the label, however if you do not have access to liquid aminos there are specifically gluten free soy sauces you can use instead.

If you are looking for a non soy based alternative, there is aminos made from coconut. It isn’t made from the actual coconut that you may be thinking of, but actually the sap of the coconut tree. It has that same umami flavor, similar to soy sauce, while also being vegan, soy free, and gluten free. 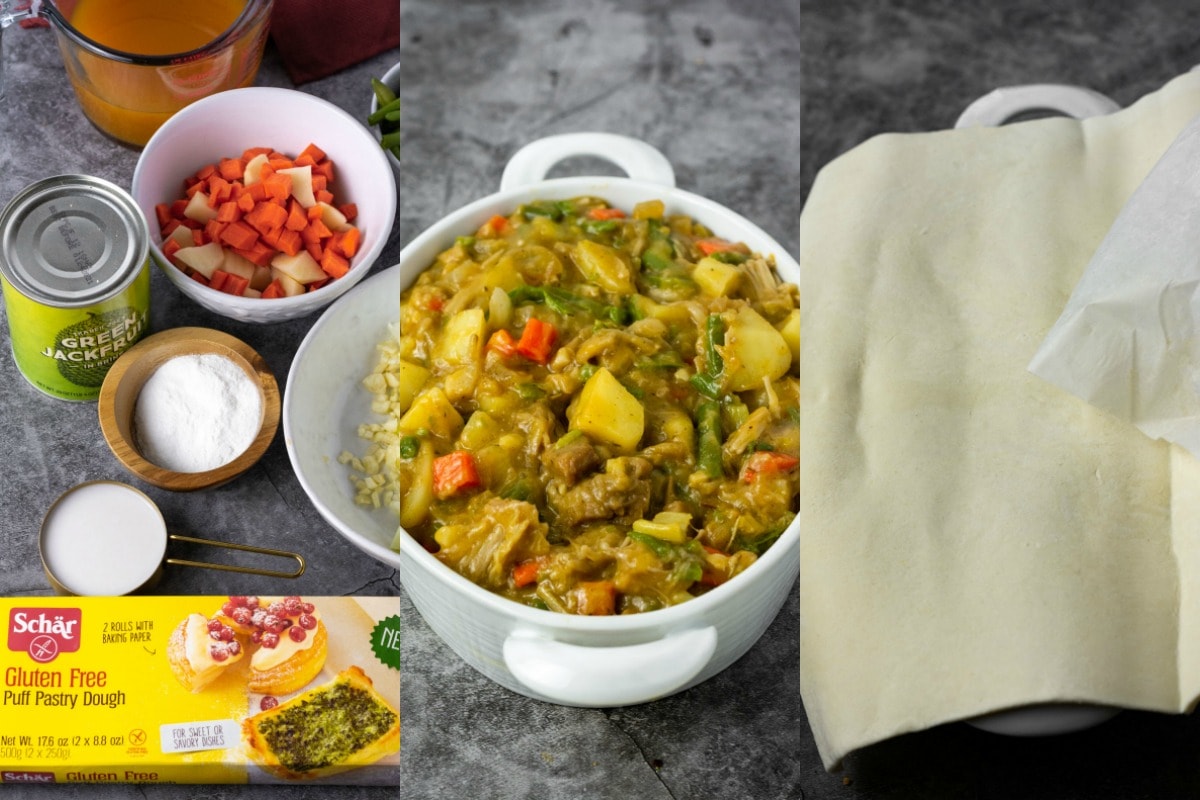 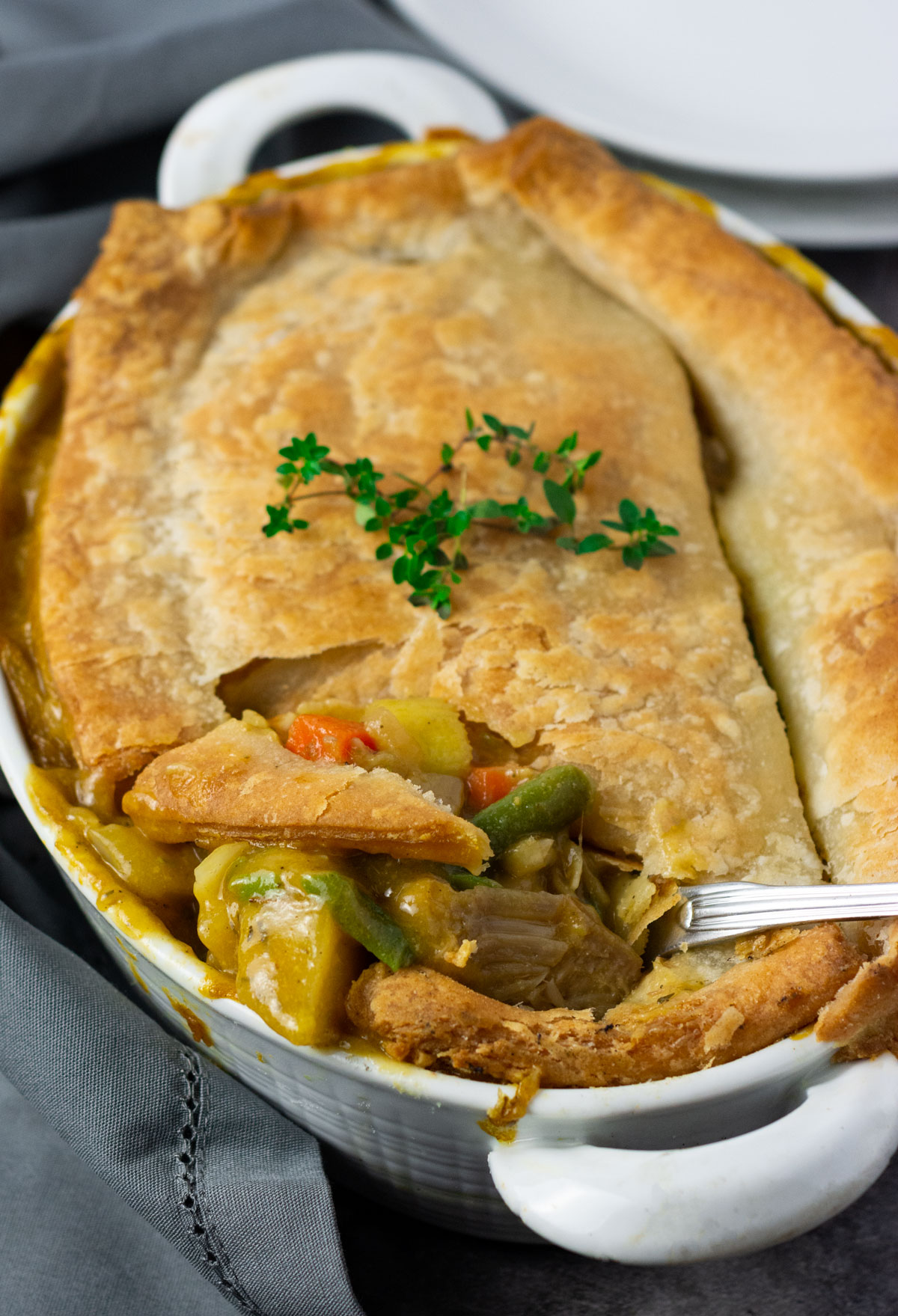 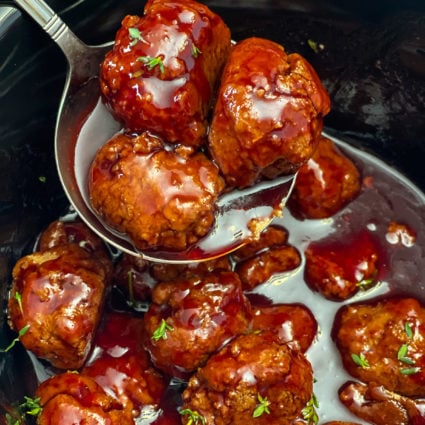 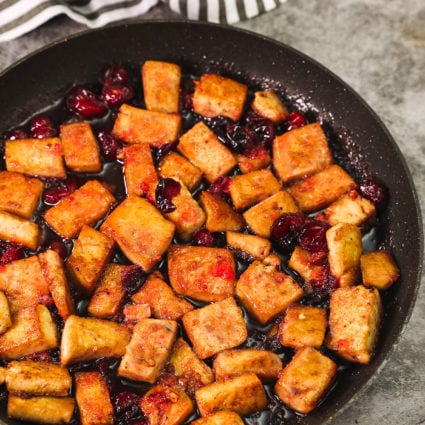 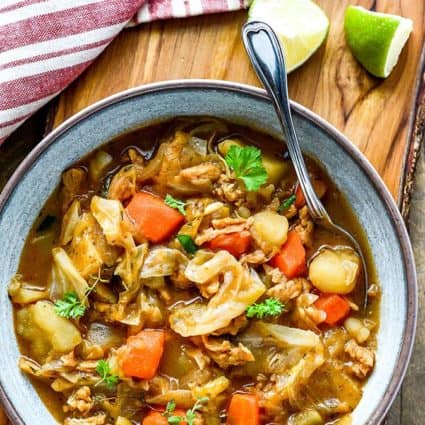