This delicious Vegan Chicken And Dumplings recipe taste so amazing! The perfect comfort stew that is bursting with flavor in every bite! 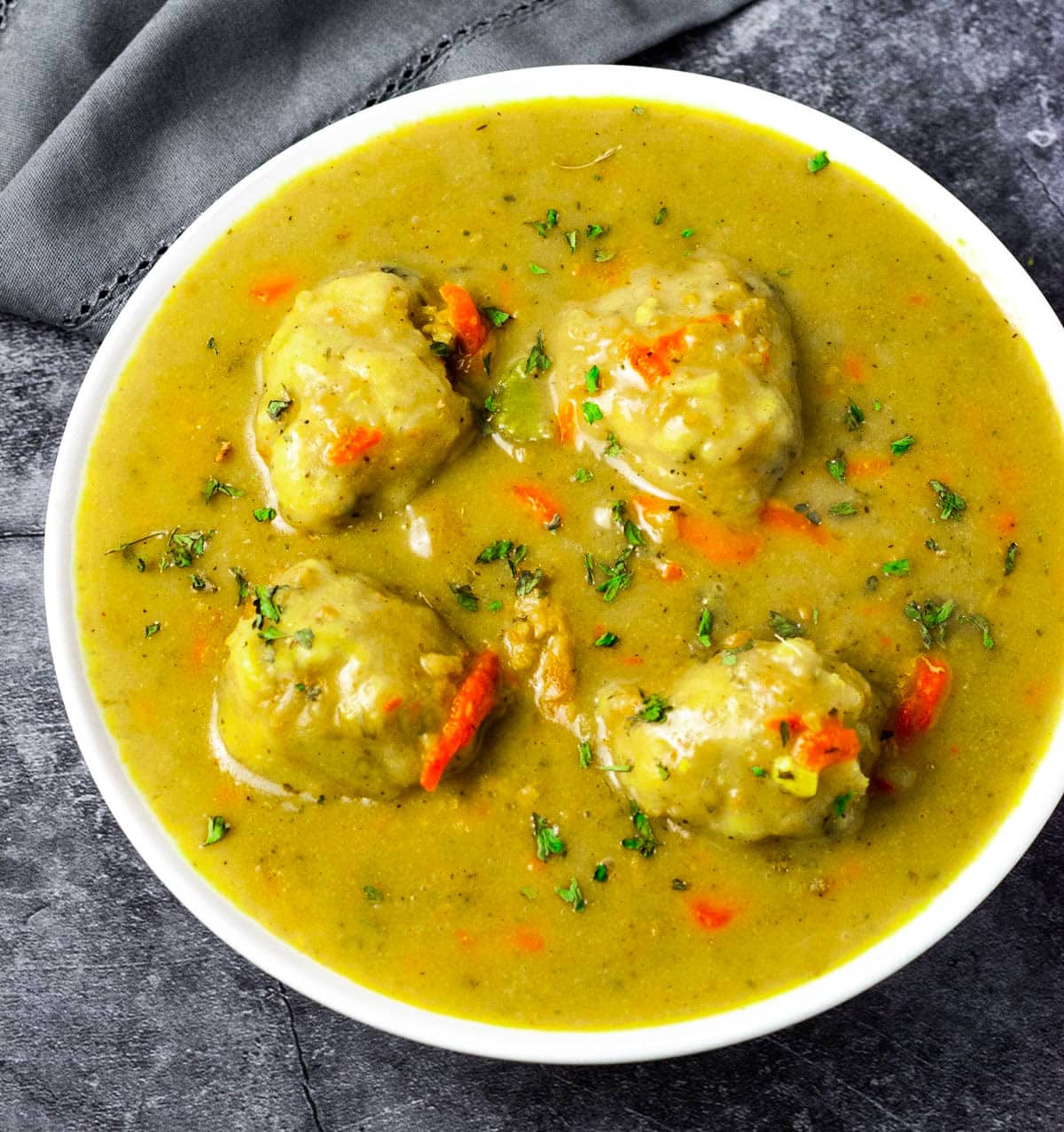 This Vegan Chicken and Dumplings recipe are super easy to make, comforting, and delicious. It’s a healthy, protein-packed meal that will warm you up on the inside!

I have been meaning to share my recipe for the longest while, but there is nothing like the right time. This is my vegan version of the old classic dish, ‘ Chicken and Dumplings. The beauty of my version is that it is vegan and gluten-free.

It is easy to prepare, and the result is beyond amazing!

I love to prepare stews, and I believe as a cook, that is where my strength lies, taking simple ingredients and turning them into out-of-this-world tasty recipes.

Vegan chicken and dumplings is a hearty plant-based meal that is prepared with soy curls, veggies, vegetable broth, different spices and herbs, and dumplings!

FOR THE FULL LIST OF  INGREDIENTS, SCROLL TO SEE THE RECIPE CARD AT THE END. BUT BEFORE YOU SCROLL CHECK THE IMPORTANT INFORMATION THAT IS INCLUDED IN THE BLURB. 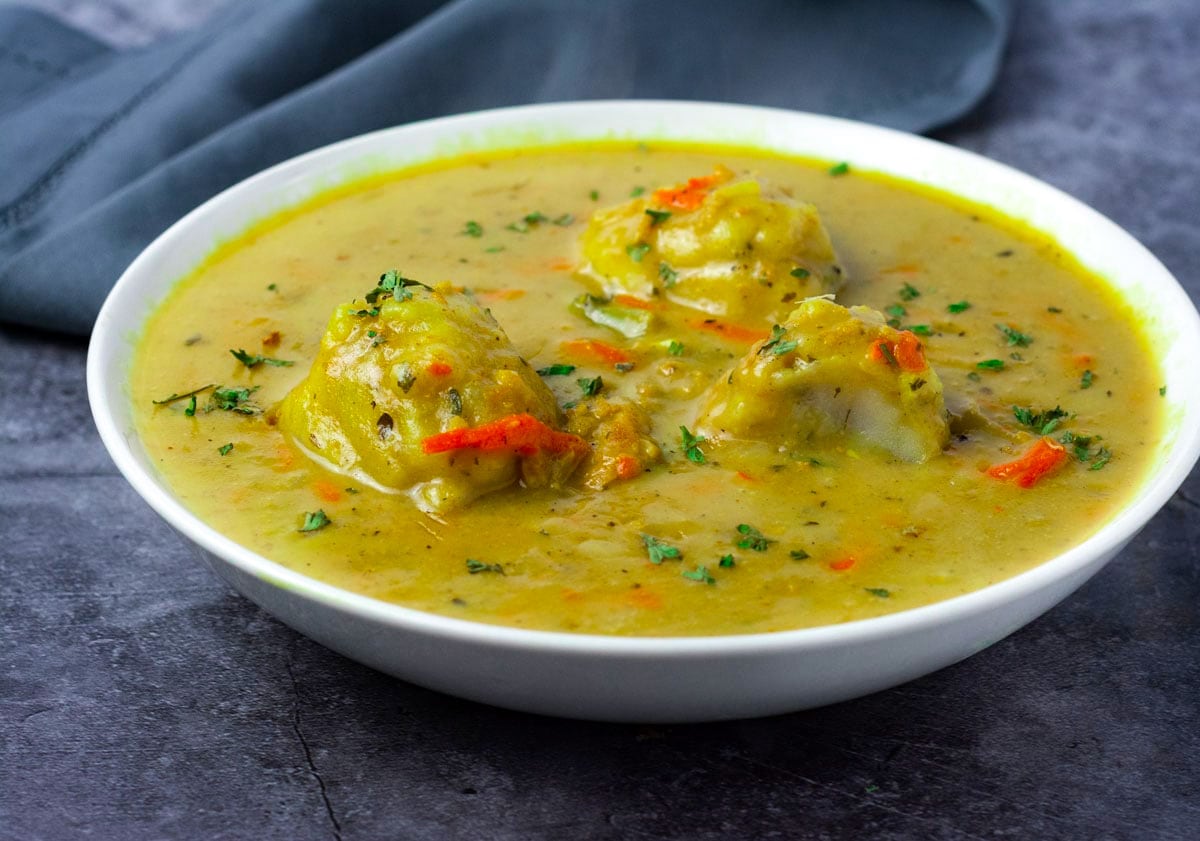 You’ll want to invite your friends over for this dish! It is a bit of work but totally worth it.

Scroll down for the detailed recipe, but I suggest reading the complete article for useful information, some tips, and suggestions if you want to make a perfect recipe every time.

What Are Soy Curls?

Soy curls are a great meat substitute. They are also one of the most healthy things you can buy.

Soy Curls are produced from whole soybeans, which have all of the fiber, as opposed to most meat substitute products on the market, which is made from separated soy protein or plenty of obscure components, many of which are difficult to pronounce.

Soy curls have a chicken-like texture, making them one of the healthiest and most natural chicken substitutes I’ve ever made. Moreover, they are gluten-free.

Butler Soy Curls are available for purchase straight from the company or on the internet. After rehydrating, it can be used as a chicken alternative.

It is delicious with brown rice and a variety of vegetables such as bell peppers, tomatoes, and avocados. You can use your favorite vegetables as an alternative.

What Kinds Of Dumplings Are There?

Drop dumplings are used in this recipe. Why? After experimenting with various methods for making homemade dumplings, these drop dumplings came as the winner. They’re simple to prepare, quick to cook, and quite tasty! This recipe makes homemade, fluffy dumplings that float on top of chicken broth. 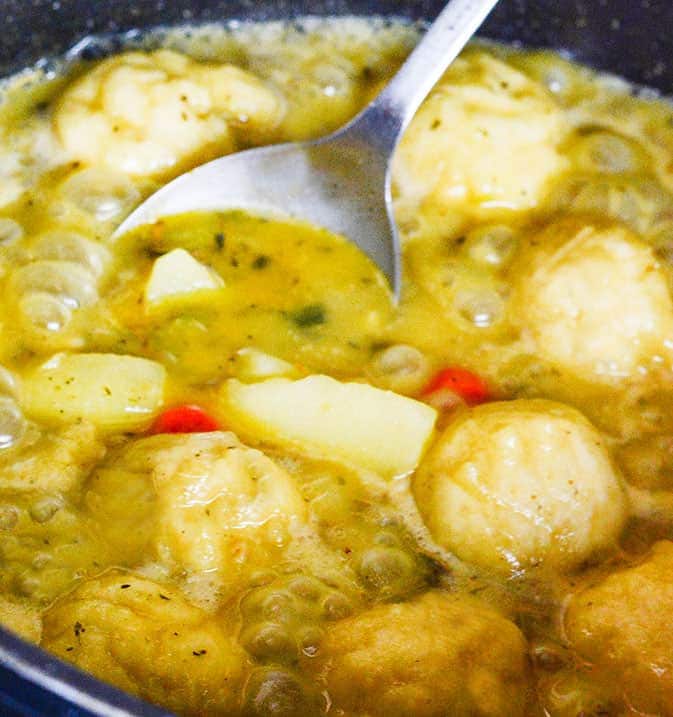 How To Make Vegan Chicken And Dumplings?

To prepare this vegan chicken and dumpling recipe, I rehydrate Butlers Soy Curls in hot water, then I drain the water and squeeze out as much liquid. I added seasonings and sauteed it for 5 minutes to lightly brown and seal the flavors.

I then saute the vegetables and herbs; next, I add the broth and seasonings.

I allowed the stew to simmer, so flavors would meld while I made the dumplings.

Finally, I added the dumplings to the flavorful stew. 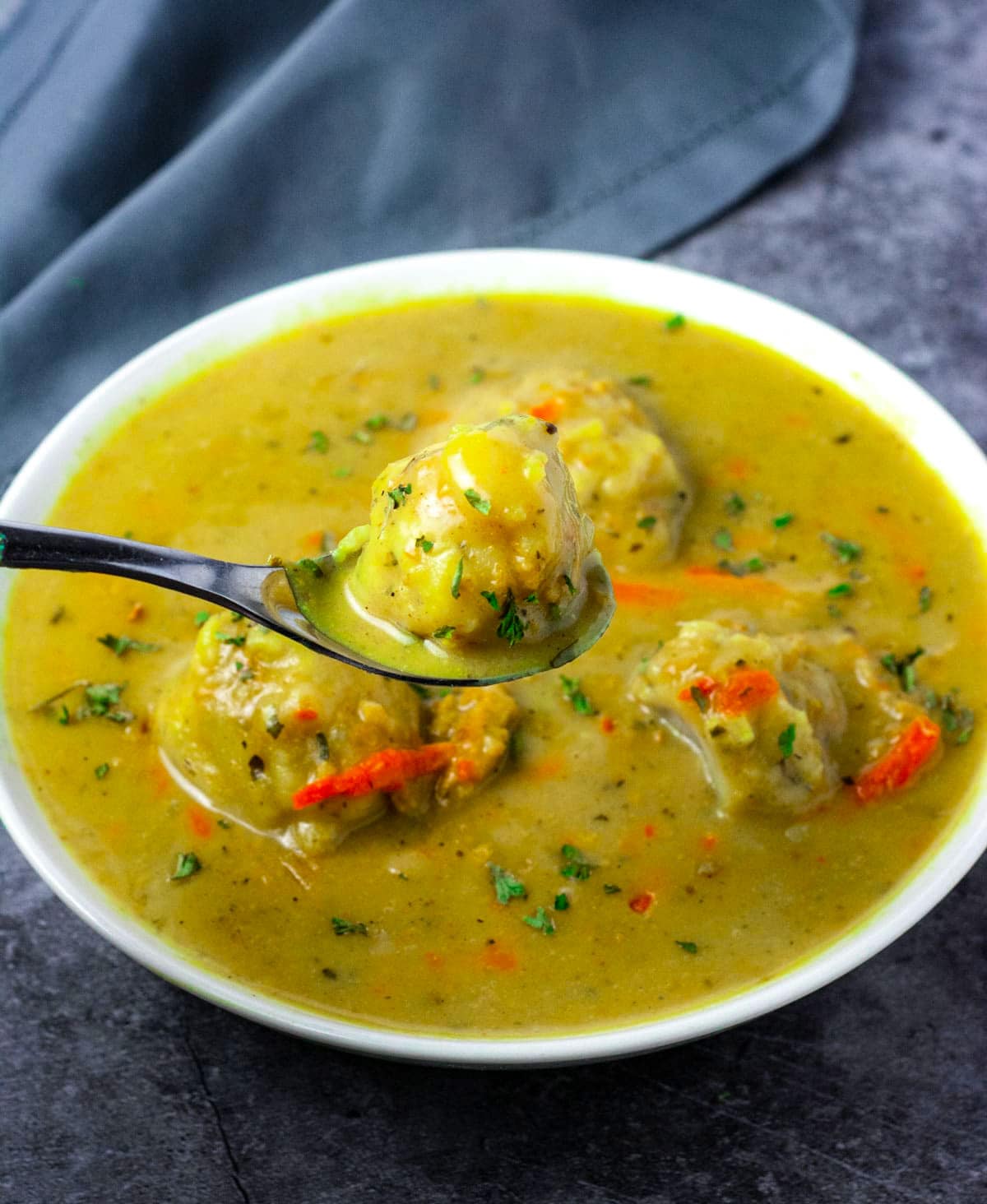 Other Vegan Stews To Prepare

It traditionally has a thick, rich chicken soup-like consistency with doughy dumplings on top.

This dinner is full and satisfying on its own. You can serve a variety of light vegetable-forward side dishes, such as broccoli, asparagus, potato wedges, and caesar salad, in addition to the main course.

Because the dumplings absorb the liquid, this is a dish that is best served immediately. If you wish to save the dish for later, refrigerate the dumplings and stew separately in airtight containers.

If you want the stew base of chicken and dumplings to be thicker, you need to do this BEFORE you add the dumplings. Put approximately one-third of the liquids into a bowl. 2 tablespoons cornstarch, whisked into the liquid, pour the smooth mixture back into the stew and whisk it in.

This hands-on dish is a lot of fun to make! Using these suggestions, you can save time and avoid making all the components at once.

Then when you are ready to eat, saute soy curls with vegetables and proceed with the recipe as directed above.

Mix the ingredients until they are gently combined.

Avoid using excessive amounts if your recipe calls for rolling the dumplings out with additional flour.

If you want to save time, use Bisquick or another vegan-friendly dumpling mix to make the dumplings.

If you’re not sure, cut a dumpling in half to ensure the dough is fully cooked and fluffy.

Soy curls are typically seen to be beneficial to one’s health. They’re prepared with non-GMO, whole soybeans that haven’t been treated with pesticides, preservatives, or other chemicals. Iron, protein, fiber, and potassium are all abundant in them. Despite the fact that soy curls are typically healthful, they may be flavored with oil, pepper, salt, or sugar, which reduces the product’s nutritional value.

Soy curls and TVP are both meat alternatives made from soy. On the other hand, Soy curls employ the entire soybean, whereas TVP is much more processed. TVP comes in small chunks or bits, whereas soy curls are larger strips that resemble chicken strips.

Butler Foods is the only firm that makes soy curls, a patented meat alternative. These protein-packed strips differ from soy products such as tofu and tempeh in that they are minimally processed.

Tofu, seitan, chickpeas, or the other vegan chicken replacement can be used instead of soy curls.

Soy curls can be available in specialty stores such as Whole Foods Market, Natural Health Markets, and Sprouts. You can also buy them online.

Give this recipe a try. I’m sure you’re going to adore this recipe! And, don’t forget to share your feedback in the comments! 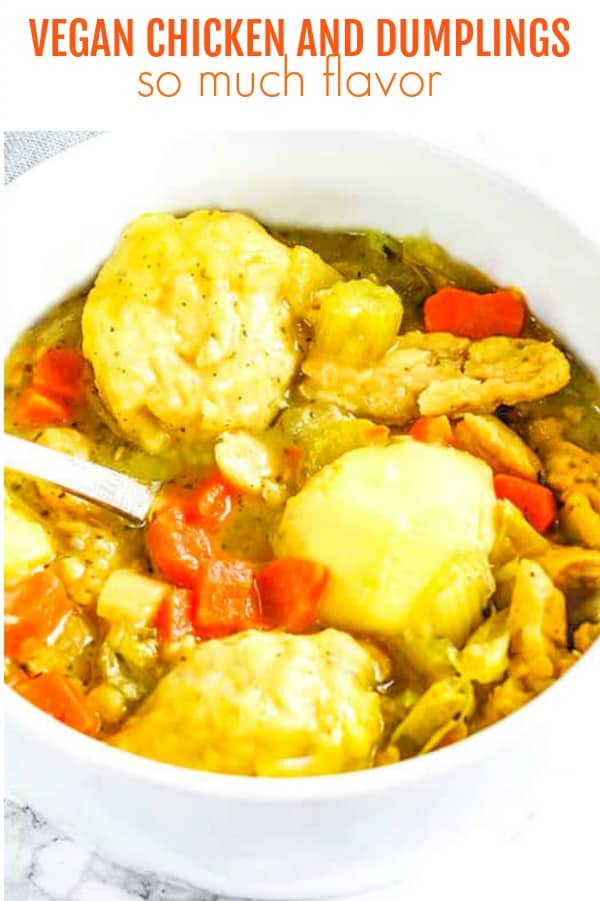 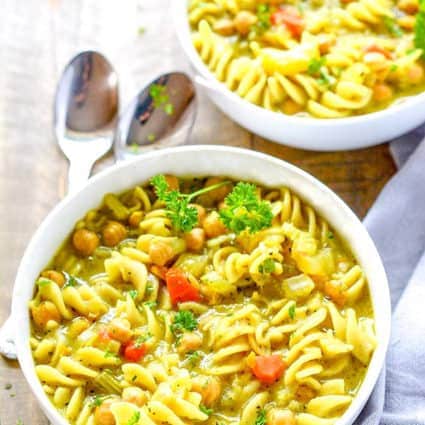 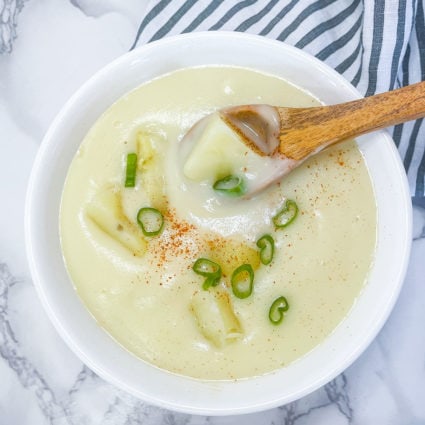 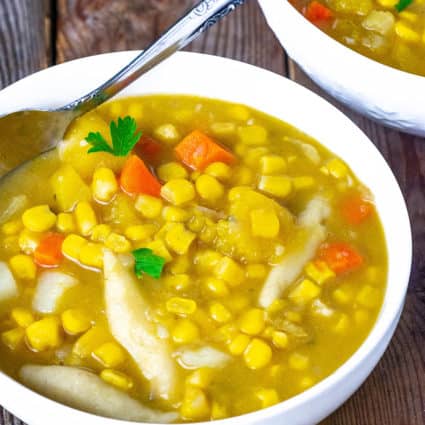