Delicious Vegan Colcannon is a popular Irish mashed potato recipe with tender sauteed cabbage. It is so flavorful and delicious served as a main with vegan sausages or as a side. Perfect dish to add to your St. Patrick's day menu. 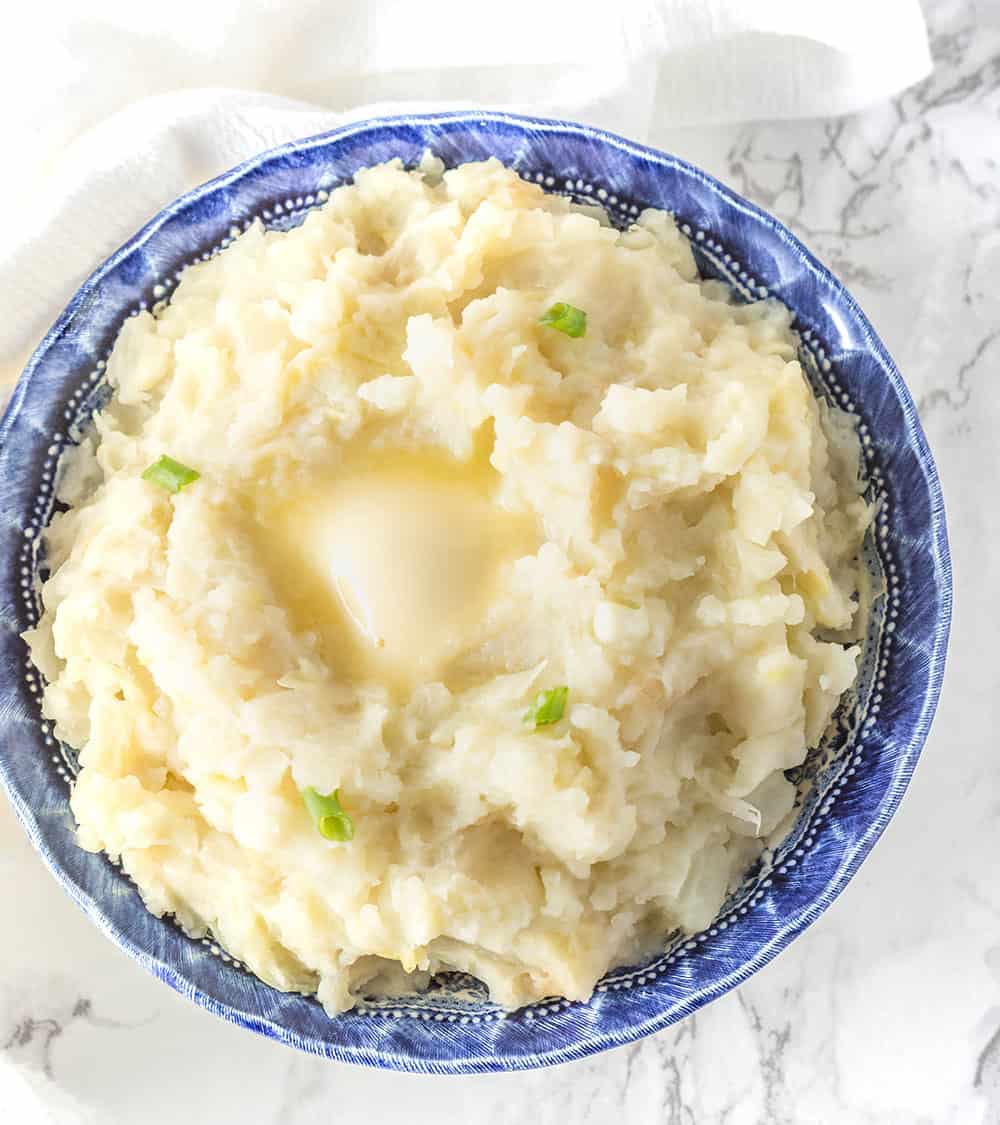 Delicious Vegan Colcannon is a popular Irish mashed potato recipe with tender sautéed cabbage. It is so flavorful and delicious, served as a main with vegan sausages or as a side dish. The perfect dish to add to your St. Patrick’s Day menu!

I have been seeing colcannon recipes for years now, especially as it gets closer to St. Patrick’s Day, so I decided to do my research on this dish, and I fell in love with it right away.

I remember the first time I tried it. It was like a frenzy going on in my mouth, in such a good way. This is how I have kept vegan colcannon in my life since then.

Vegan Colcannon is the ultimate Irish side dish on St. Patrick’s Day. It is embedded in a deep history of Irish tradition and culture; it is very popular in Ireland and was brought by Irish immigrants to the USA. It is traditionally eaten at Halloween and on the 1st of May; however, it can be eaten all year round. It is also supposed to bring good luck (I don’t really believe in superstition, but here’s my recipe regardless).

This Vegan version is made with mashed potato, cabbage, and onions. It’s vegan, vegetarian, and gluten-free. This humble colcannon recipe probably isn’t going to convert any meat-eaters, but it is delicious and comforting for a chilly winter’s night. 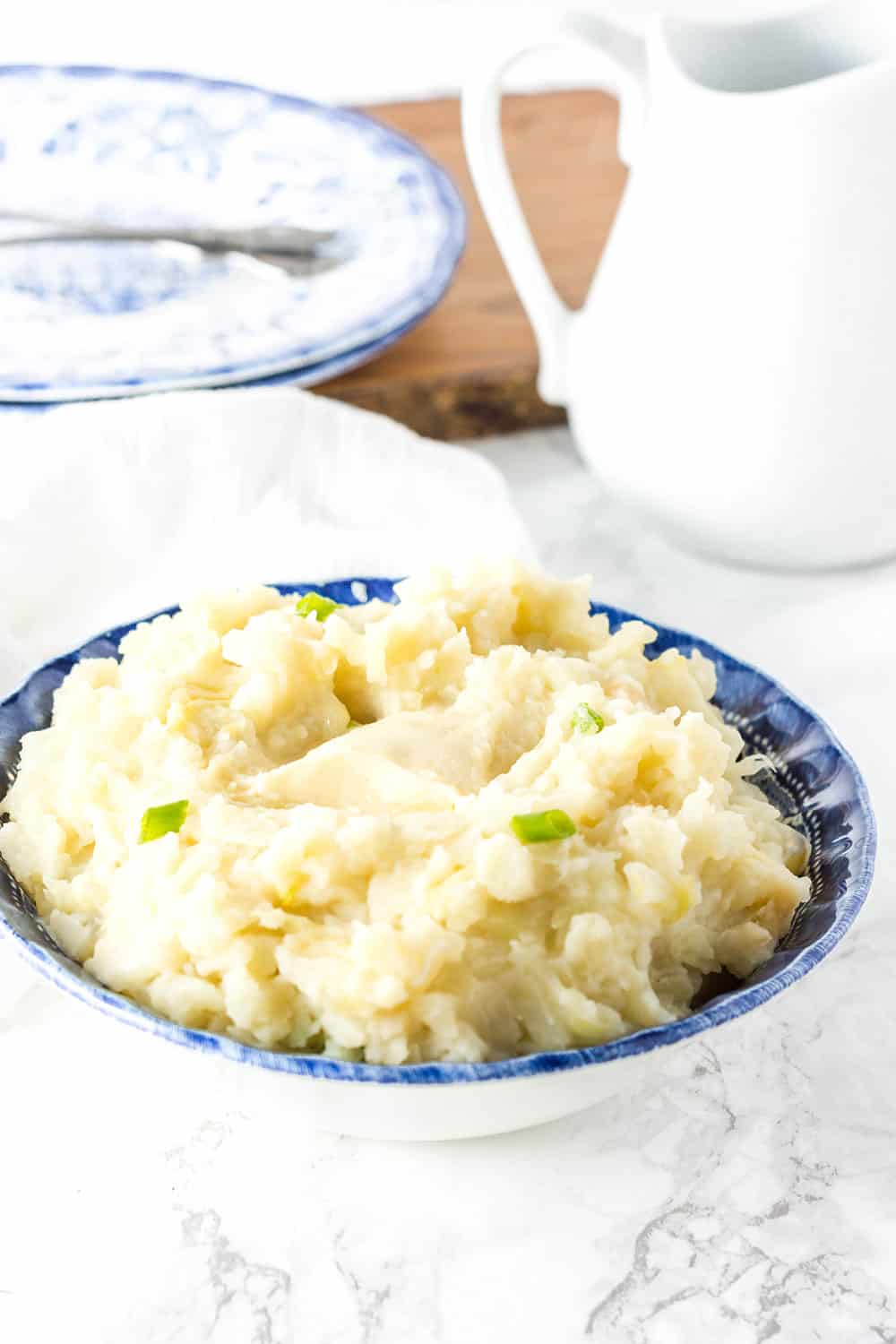 So what is colcannon? It’s a dish of mashed potatoes mixed with butter and kale or cabbage. It’s hearty, comforting, and delicious!

According to Irish scholar Patrick Weston Joyce, it is “mashed potatoes with milk and butter, chopped cabbage, and pot herbs.” Other ingredients, including scallions, leeks, laverbread, onions, and chives, can be added. Some recipes call for cabbage instead of kale. This popular dish comes in a variety of regional versions. It was a year-round, low-cost food. Boiled ham, salt pork, or Irish bacon are common accompaniments. To accompany corned beef and cabbage, it’s ideal.

In the 1600s and 1700s, cabbages, potatoes, and leeks were considered common man’s fare in Europe and Ireland; therefore, it was obvious that a dish combining all three elements would evolve. Colcannon is derived from the Gaelic phrase “cal ceannann,” which means “white-headed cabbage.” It’s also thought to be derived from the old Irish “cainnenin,” which means “garlic, onion, or leek.”

Colcannon is traditionally served as the main course at Halloween celebrations in Ireland, and the evening is known as “Colcannon Night.” Colcannon is used to forecast marriages as Americans believe in the amusing belief that the single young girl who catches the bridal bouquet will marry next. Young single Irish ladies want to find the ring concealed in their colcannon plate.

An unmarried woman blindfolded is to pick the head of kale or cabbage from the garden that is used in the colcannon dish. In bowls of colcannon, charms like rings, thimbles, and money are wrapped and hidden. This is a really interesting evening for young men and women.

If an unmarried young girl is fortunate enough to locate a ring in the bowl, she may soon get a marriage proposal and will almost certainly marry prior to the following Colcannon Night. Other young maidens would hang their stockings from the front door handle with their 1st and last spoonfuls of colcannon. The first man to go through the door is expected to be their future husband.

Small coins, such as threepenny and sixpenny bits, were also hidden inside the dish as prizes. Other things could be a stick representing an unhappy marriage and a rag representing a life of poverty.

Champ is similar, except it’s made with scallions, milk, and butter. It was customary to offer the fairies a part of a champ by setting a plate of colcannon and the spoon at the base of a hawthorn.

Colcannon was brought to American cuisine by Irish immigrants, and it is now more typically served on Saint Patrick’s Day in the United States. One of the favorite ways to eat colcannon is to form a great mountain-shaped mound on the plate and make a large hole or well in the center of the pile. A substantial part of butter is inserted into the hole, which quickly melts. A layer of cream then surrounds the colcannon pile. If you do this, you’ll have a taste of heaven on your tongue. 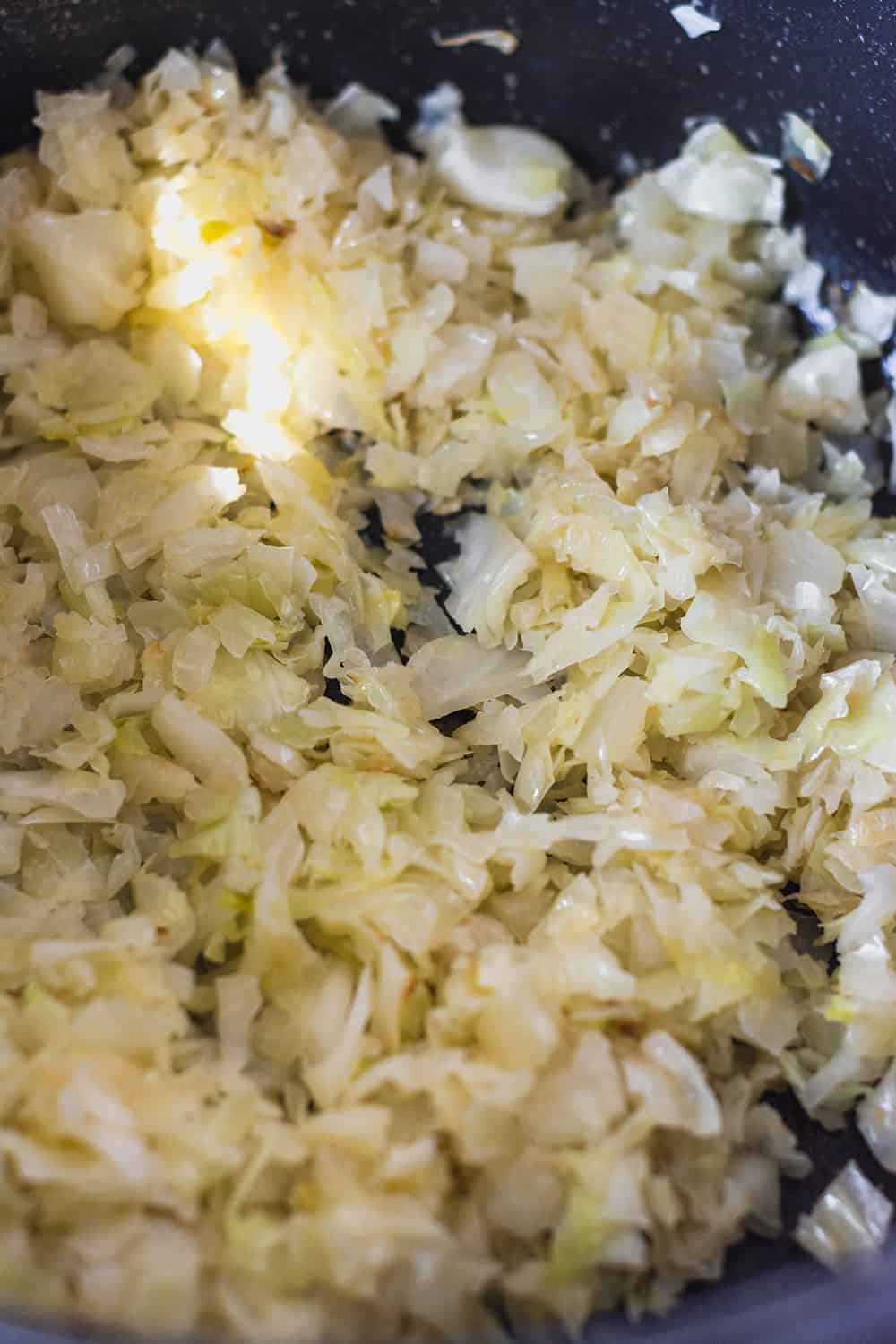 Why Will You Enjoy This Recipe?

How To Make Vegan Colcannon? 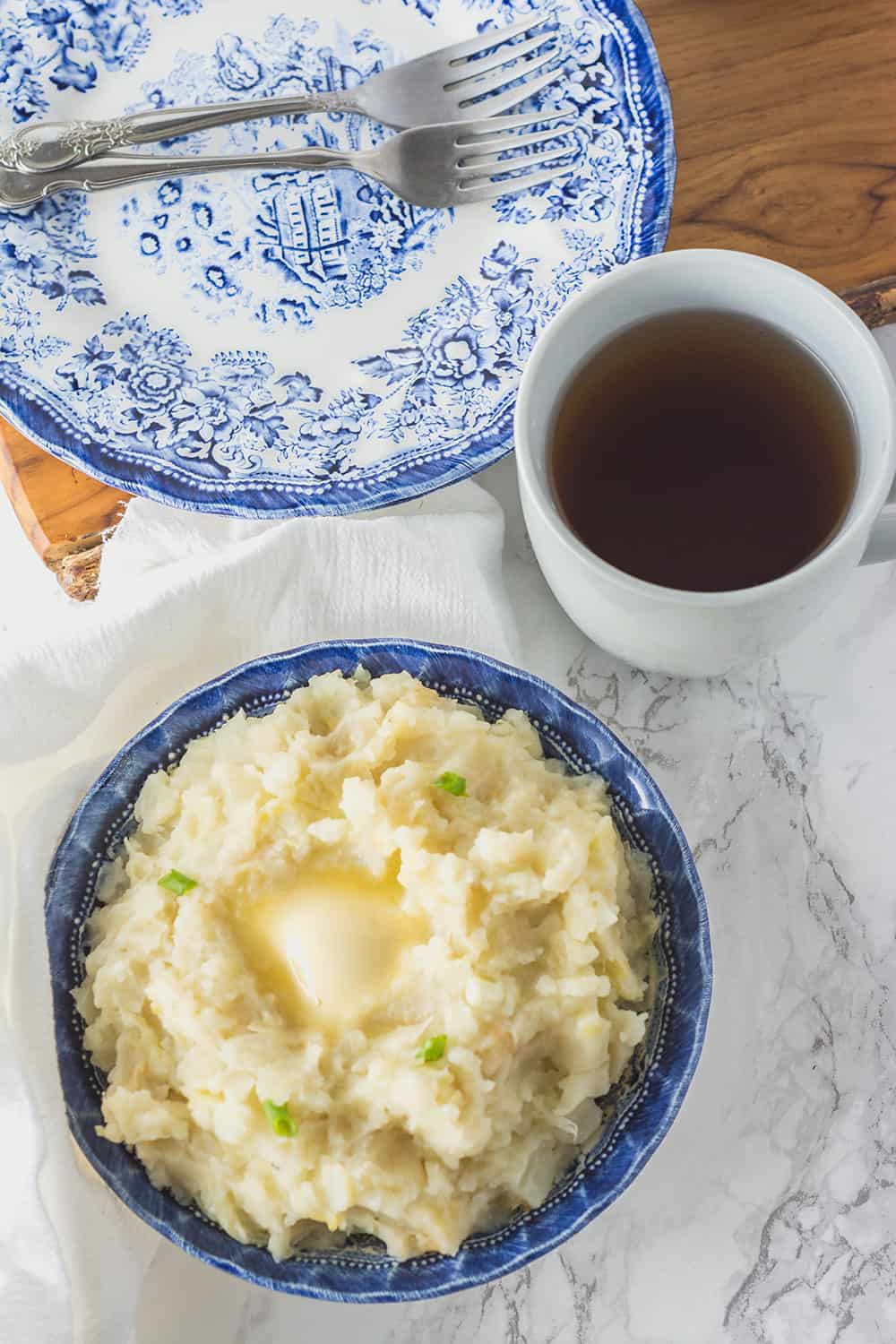 Why Is It Called Colcannon?

Colcannon gets its name from the Gaelic words cál (or kale) and caineann (leek). Other linguistic explanations of the name refer to “white-headed cabbage.”

What Is The Difference Between Champ And Colcannon?

Champ is made with mashed potatoes and green onions, while colcannon includes kale or cabbage!

Is Colcannon An Irish Or Scottish Dish?

Colcannon is an Irish dish that resembles Rumbledethumps, a Scottish dish, and Bubble and Squeak, an English dish. All of these dishes include potatoes and cabbage (or some other type of greens), which are common crops of the area. As a result, no food will go to waste with these recipes.

How To Make Colcannon Vegan?

What Goes Well With Colcannon?

Colcannon is usually served with Irish bacon or boiled ham, but it would be great with vegan Irish Vegetarian Stew!

How Should Leftover Colcannon Be Stored?

When scooping leftovers from the storage container, always use a clean spoon and don’t keep spoons in the container when storing. Also, make sure the container is airtight.

How To Reheat Leftover Colcannon?

A casserole dish can be used to reheat a substantial portion of potatoes if you need to do so. Reheat at 350° for 30 minutes, or until warm in the center, covered with aluminum foil to prevent drying.

What Other Greens Can I Substitute For Cabbage?

You can replace the cabbage with kale or any other leafy green.

Can Vegan Colcannon Be Made In Advance?

The best way to enjoy colcannon potatoes is to eat them right away. However, you can prepare this dish ahead of time, refrigerate it, cover it with foil, and reheat it in a low oven.

Is This A Gluten-Free Dish?

You can mash potatoes with a simple potato masher, a ricer, or a food mill. Avoid using an electric mixer, as this will result in gluey potatoes.

What Can I Make With Leftover Colcannon?

It’s a bonus if there are any leftovers! Use leftovers to make patties, top a shepherd’s pie or make Colcannon Cakes.

Try this Vegan Colcannon recipe for a wonderful taste experience! And, don’t forget to share your feedback with me by leaving a comment below! 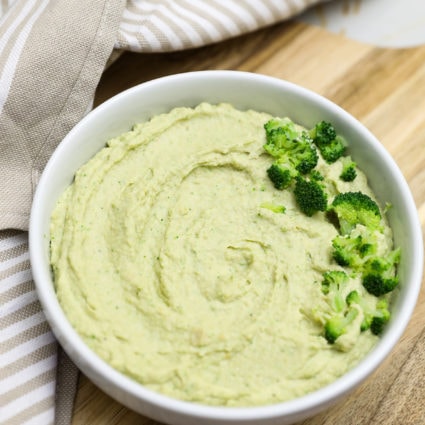 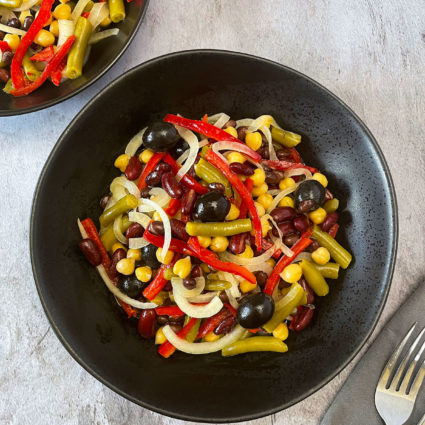 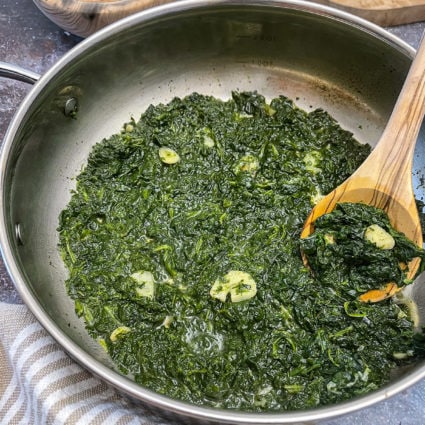