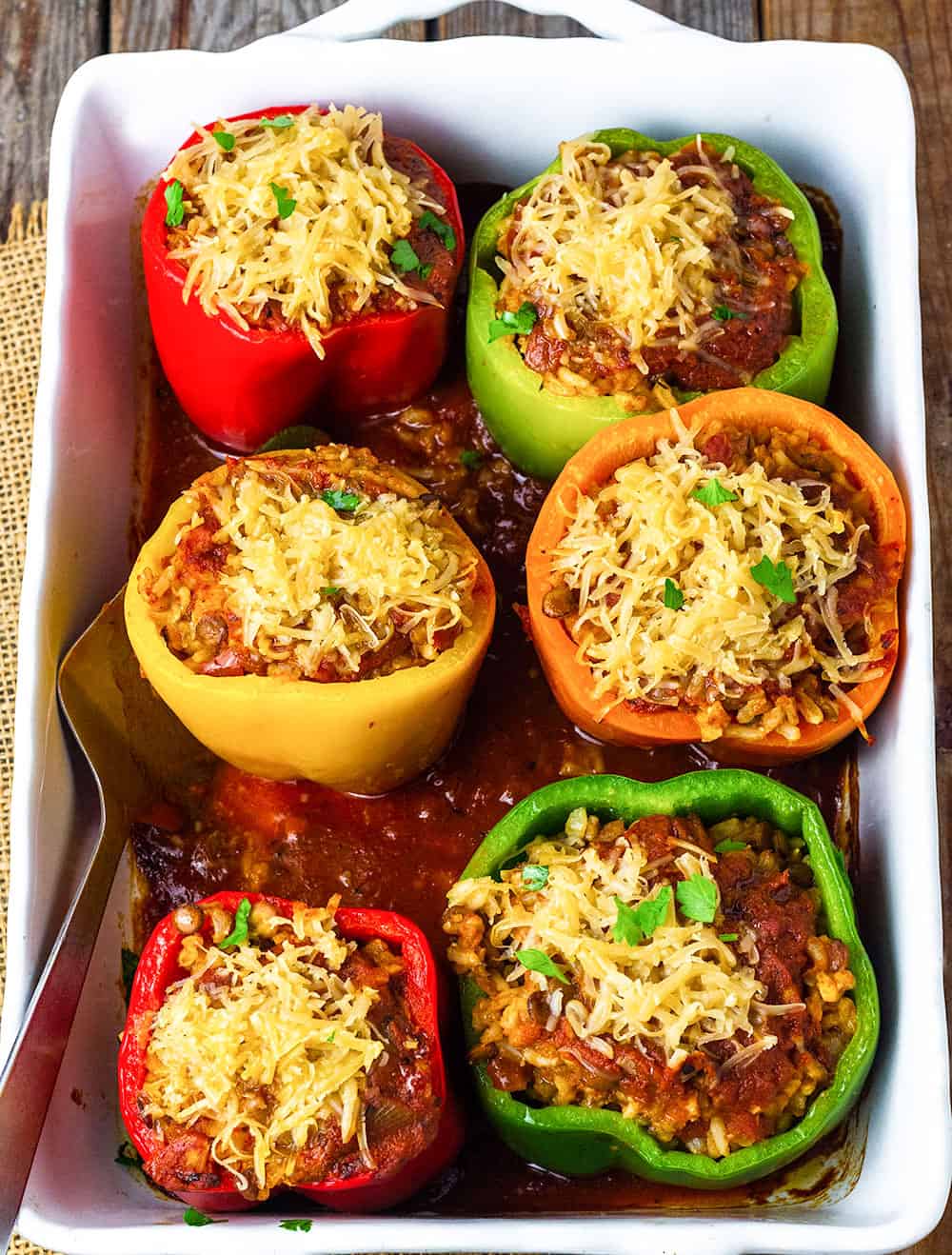 Vegan stuffed bell peppers are a delicious supper that the entire family will enjoy. Fresh bell peppers are stuffed with the hearty and savory filling, which is then baked with cheese on top. They’re gluten-free, nutritious, and quite easy to make. Light and hearty side dish!

All the food comes together in one dish. I’ve stuffed everything into a bell pepper. It’s a fantastic concept. Even if you don’t like bell peppers, it is for you.

The funny thing is that I’m not a fan of large raw bell peppers, but I used these colorful bell peppers for my stuffed bell peppers recipe. Stuffed green peppers though not really my favorite by I included them for their colors, but typically I don’t cook with them.

But guess what? I’m really happy with these vegan stuffed bell peppers. I believe this is because they become slightly sweeter and less aromatic as they are cooked down. I understand that bell peppers have a distinct flavor that some people dislike.

My mother used to make something special out of all the leftover stuff in the refrigerator before she went vegan. She frequently made stir-fries with leftover meat and vegetables, but she always made stuffed bell peppers whenever we had extra rice.

Stuffed bell peppers are one of the most simple and adaptable meals ever. They can be stuffed with anything, and they elevate the ordinary to the marvelous.

These vegan stuffed bell peppers are incredibly delicious! They’re vibrantly colored, delicious, healthful, and really simple to make. This recipe is ideal as a side dish or appetizer because it uses basic and inexpensive ingredients. How To Grow Bell Peppers?

I prefer to use rice, tomato, and vegan cheese for our meals. You can also add your favorite stuffing, spices, or herbs to make it your own. Because these bell peppers are so simple to prepare, flexible, and healthful, I usually make them at least once time in a week. I hope you have as much fun with these as I do!

These stuffed bell peppers are delicious on their own or with a salad or vegetable side dish, and they freeze beautifully!

I love making stuffed vegetables as they always look elegant when served, just like my Southwestern Stuffed Spaghetti Squash and Vegan Stuffed Eggplant. 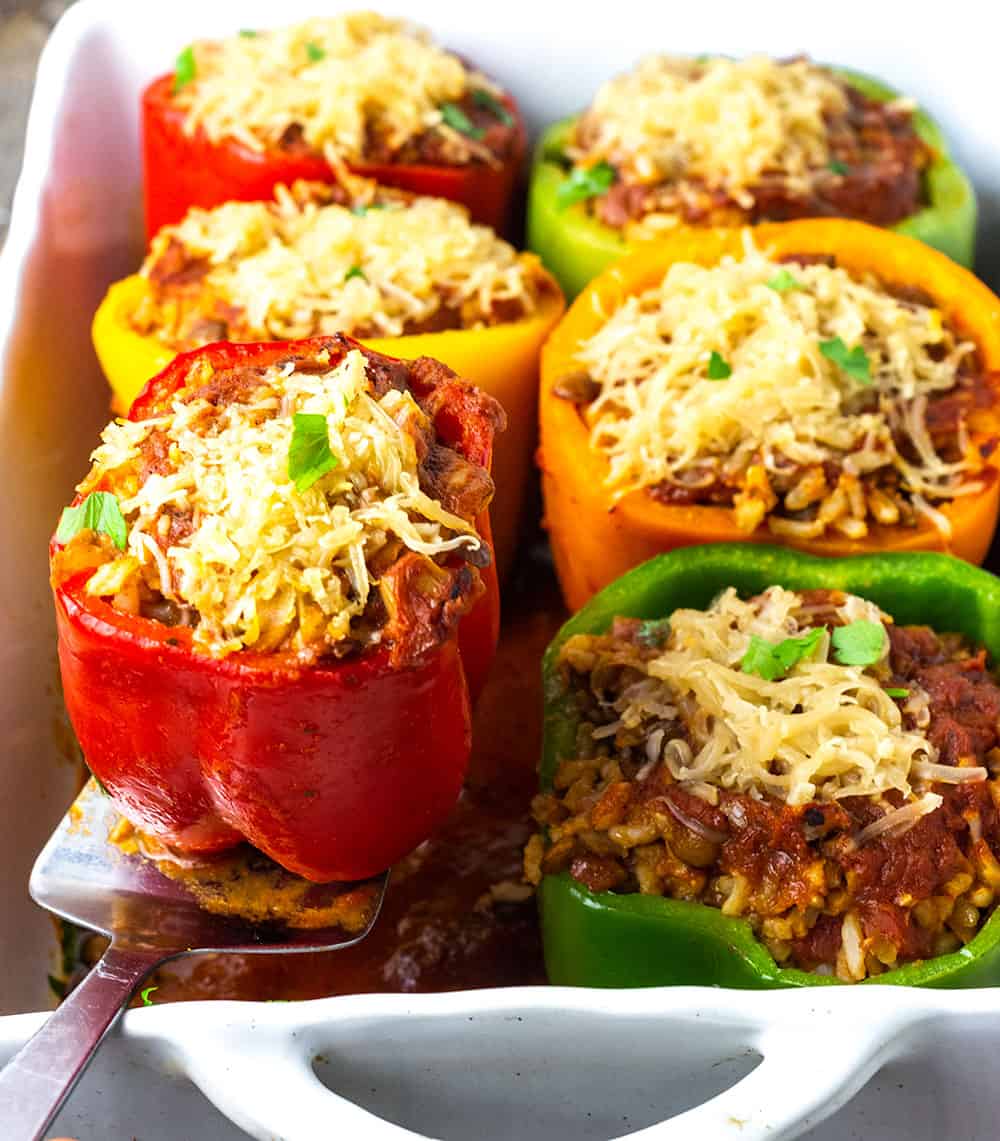 Why Will You Enjoy This Recipe?

I’m sure you are going to love these vegan stuffed bell peppers because:

It’s Good For Your Health!

They have far fewer Vitamin C and beta carotene than a red, orange, purple, and yellow bell pepper. In addition, they are sweeter than green bell peppers.

How To Make Stuffed Bell Peppers?

The traditional stuffed bell pepper recipe is made using ground beef, rice, onions, tomatoes, and seasonings. To make a vegan-gluten-free version, a lentil is used to replace ground beef. You can use green or brown lentils; this dish is great for leftover Brown Rice.

What To Serve With Stuffed Peppers?

This delicious vegan stuffed bell pepper recipe can be served in a variety of ways. They go well with veggies, salads, and other delicious foods.

Here are a few ideas about how to serve them.

Is It Possible To Make It Ahead Of Time?

The entire filling can be prepared up to a few days in advance and stuffed into the bell pepper cavities before cooking when it’s time to eat; put the cheese on top and bake as instructed.

How Can I Store Leftovers?

Keep leftovers refrigerated for up to 5-6 days in an airtight container. Make sure to let them cool before storing them.

Can You Freeze Stuffed Peppers?

Absolutely, you can make large batches of stuffed peppers to serve later, cool bell peppers, and place them in a freezer container with a tight-fitting lid, or individually freeze peppers in an airtight freezer bag. Peppers will freeze for up to 3 months. 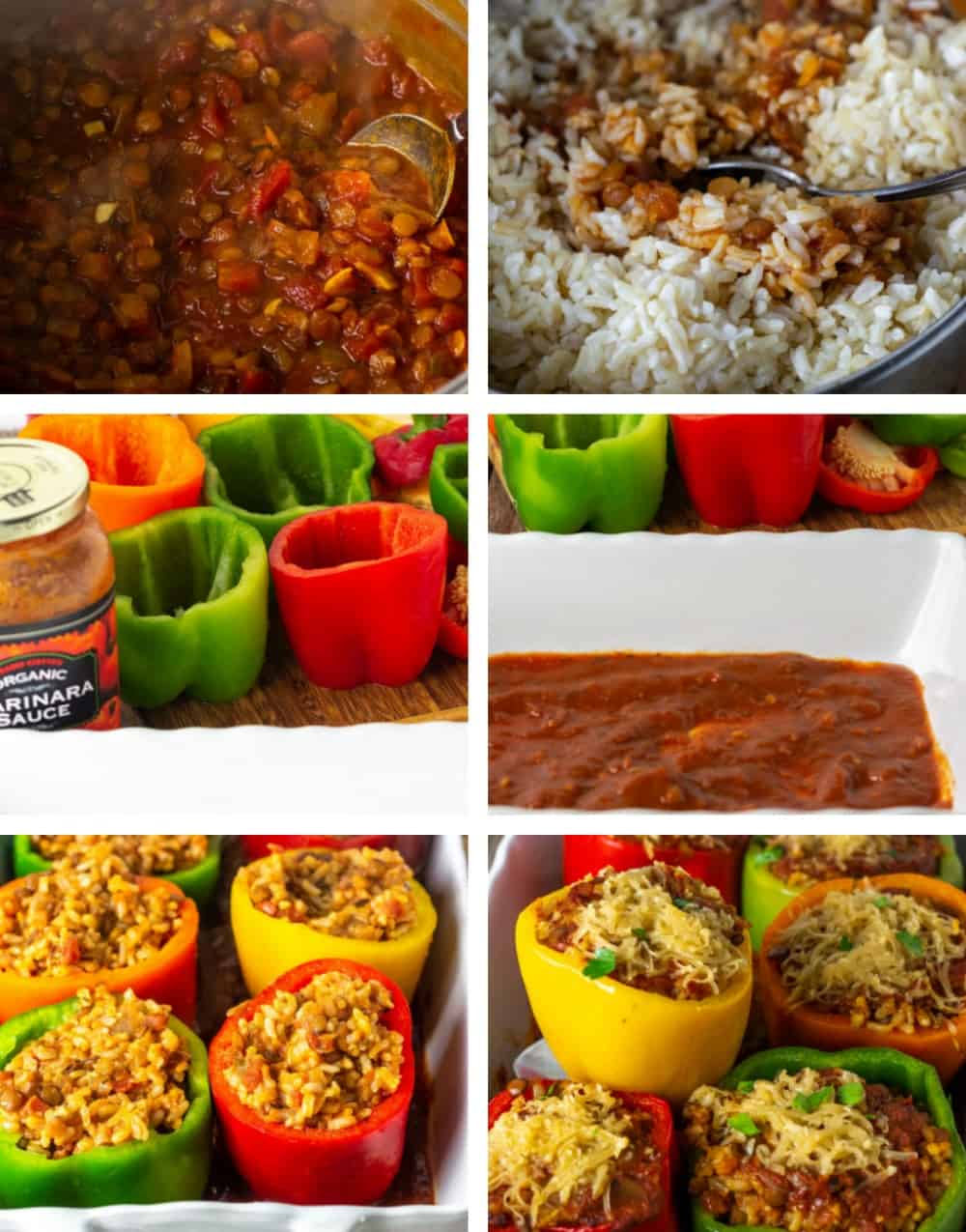 How Should Vegan Stuffed Bell Peppers Be Reheated?

When reheating vegan stuffed bell peppers, you can use the oven or the microwave. A little bit of water should be added to the bottom of your microwave-safe container so that it doesn’t dry out when it’s heated in the microwave. Heat for 1-2 minutes at a time until thoroughly hot.

Place the bell pepper(s) in an oven-safe pan that has been sprayed or oiled. Preheat the oven to 350 degrees F. Cover it with foil and bake for 25-35 minutes, or until the pepper filling is hot.

Do You Have to Boil Peppers Before Stuffing?

Although boiling peppers before stuffing reduce the baking time and result in a much softer texture, it is definitely a personal preference whether or not you boil peppers beforehand.

I prefer the slightly crunchy texture of stuffed peppers and not a mushy texture when the peppers are not boiled. A trick to eliminate precooking is to add enough sauce at the bottom of your pan and cover it while baking to help soften your peppers.

However, if you prefer boiling your peppers, trim the tops off the peppers and remove the seeds and membranes. In a big pot, bring water to a boil, then add bell peppers. Reduce to simmer for 3 minutes. Drain peppers, rinse with cold water, and set aside.

Is It Necessary To Soak Lentils Before Cooking Them?

You don’t need to soak dry lentils before cooking them for vegetarian stuffed bell peppers. However, it’s worth noting that pre-soaking and changing your water before cooking will help you avoid lectins in lentils if you’re concerned about their health effects.

This substance is frequently related to restricting the absorption of nutrients certain nutrients, although it should not be a worry for most people unless you consume a lot of lentils. In addition, if eating lentils cause stomach discomfort, soaking them may help them digest more easily.

Are Bell Peppers Required To Be Blanched Before Stuffing?

No, this is an entirely unnecessary step. There’s no need to perform any additional preparation because they cook nicely in the oven.

We enjoy simply grabbing these vegan stuffed bell peppers and biting into all of the deliciousness. However, some people want to eat with their hands, and some people prefer to use utensils to cut the food into smaller pieces.

You can also cut it with a knife and fork. You can also unstuff the peppers from the side of the plate, cut them into smaller pieces, and eat them!

How Many Calories Are In Stuffed Bell Peppers?

Stuffed bell peppers have an average calorie count of 250-600 calories. However, depending on the type of food you put them in, the calories can vary.

What Should Vegan Stuffed Peppers Be Filled With?

Take some time to read these pointers that’ll help you throughout the process:

Other Vegan Main Courses To Prepare

If you like and enjoy this recipe, please leave a comment to let me know about your feedback. 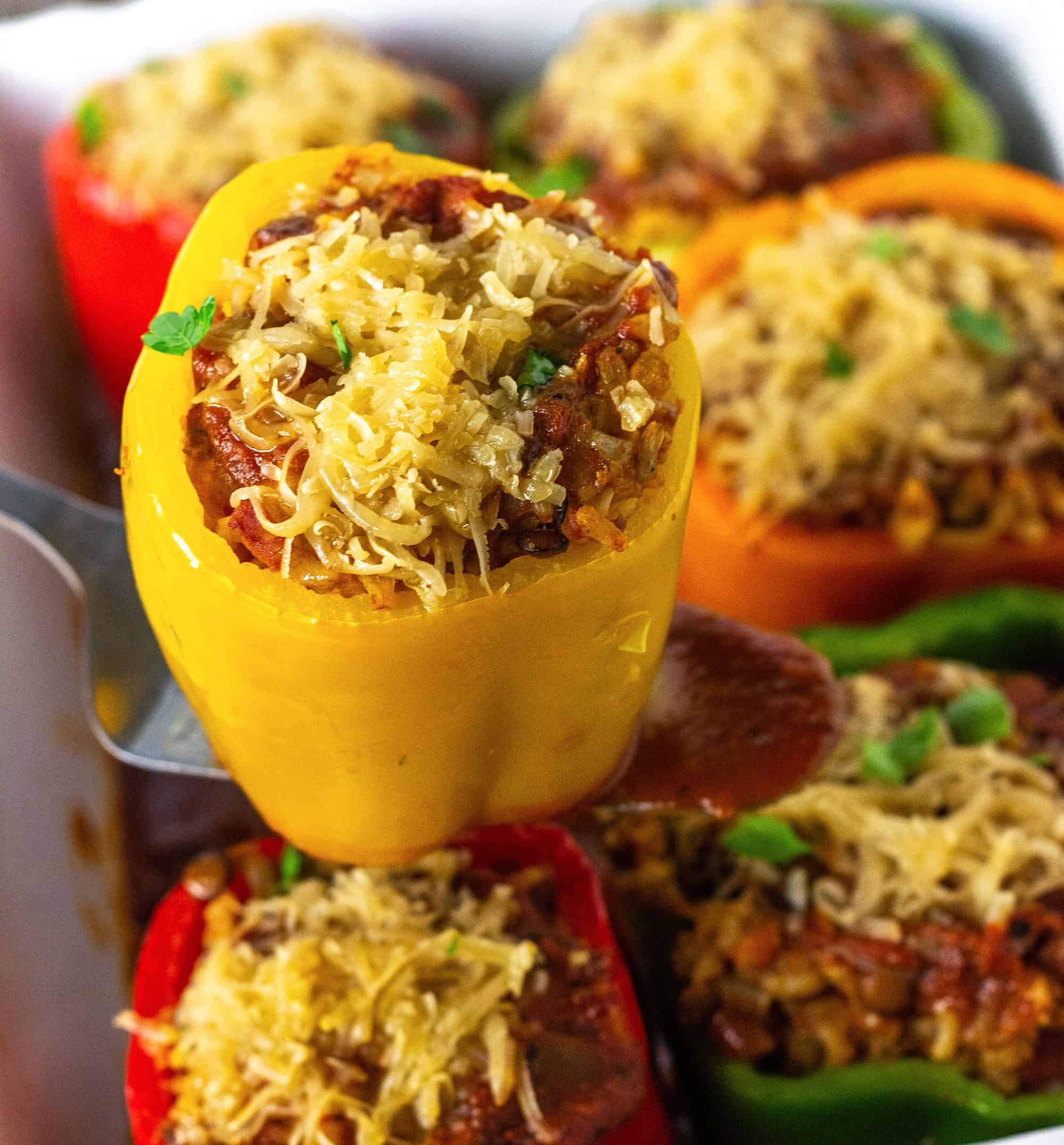 For The Stuffed Peppers

To Make Brown Rice And Lentils

For The Stuffed Peppers 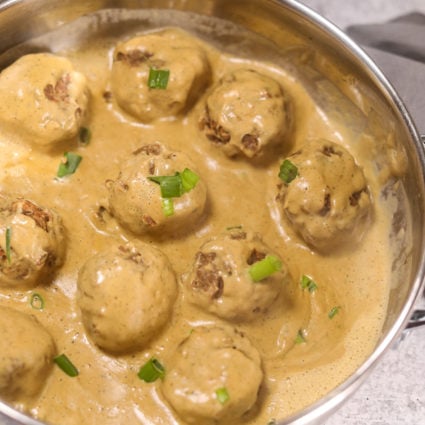 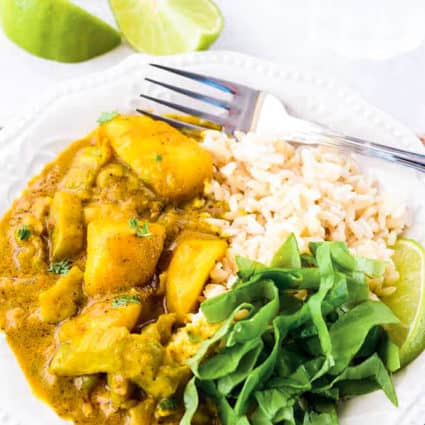 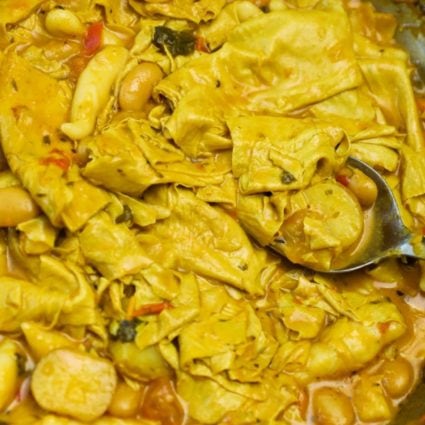