Amazing Jamaican bammy made from scratch is so easy to prepare, grated cassava is shaped into a disc, and cooked in a skillet, soaked in coconut milk for a moist flatbread that is crisp on the outside. The perfect side dish that is vegan, paleo and gluten-free. 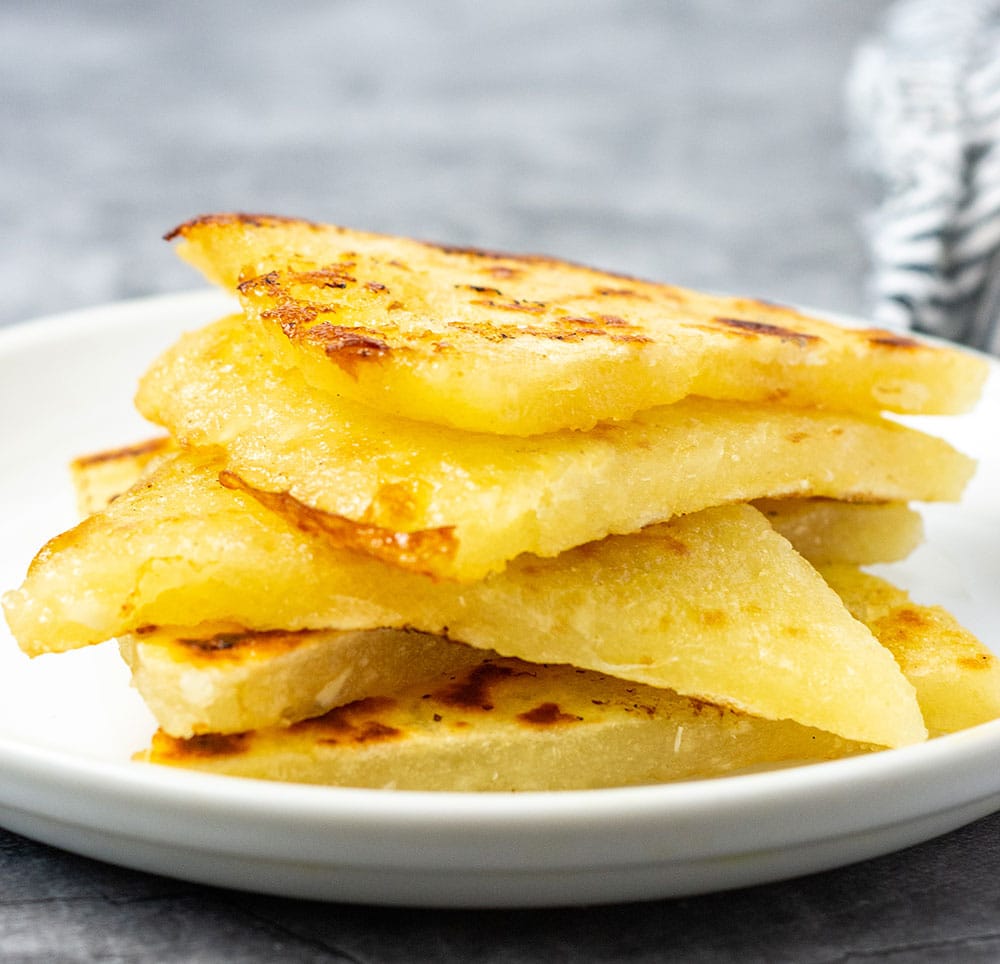 cassava is shaped into a disc and cooked in a skillet, soaked in coconut milk for a moist flatbread that is crisp on the outside. The perfect side dish that is vegan, paleo, and gluten-free.

I first published this recipe on my blog a few years ago, but after reviewing it, I felt like certain key elements were missing, and the recipe instruction needed additional explanation in addition to my typical step-by-step pictures. So, I decided to add some more details.

Bammy is a Jamaican staple, it is a less expensive alternative to wheat, it is popular in rural Jamaica where cassava is grown and made into bammy almost on a daily basis. Bammy is deliciously served with Vegan Ackee, Jamaican Callaloo, or Jamaican Steamed Cabbage.

Bammy is a family favorite, growing up in Jamaica depending on where you live, I believe it is safe to say most people purchase store-bought, but making fresh bammy is tastier.

It wasn’t until my family and I stayed in the parish of St. Elizabeth, Jamaica for a month that we noticed that most people in the area grew Cassava and made bammy from scratch. I was so impressed because prior to that, I thought bammy was only made in factories. My mother grew cassava but she used it to make starch and pone (sweet pudding). 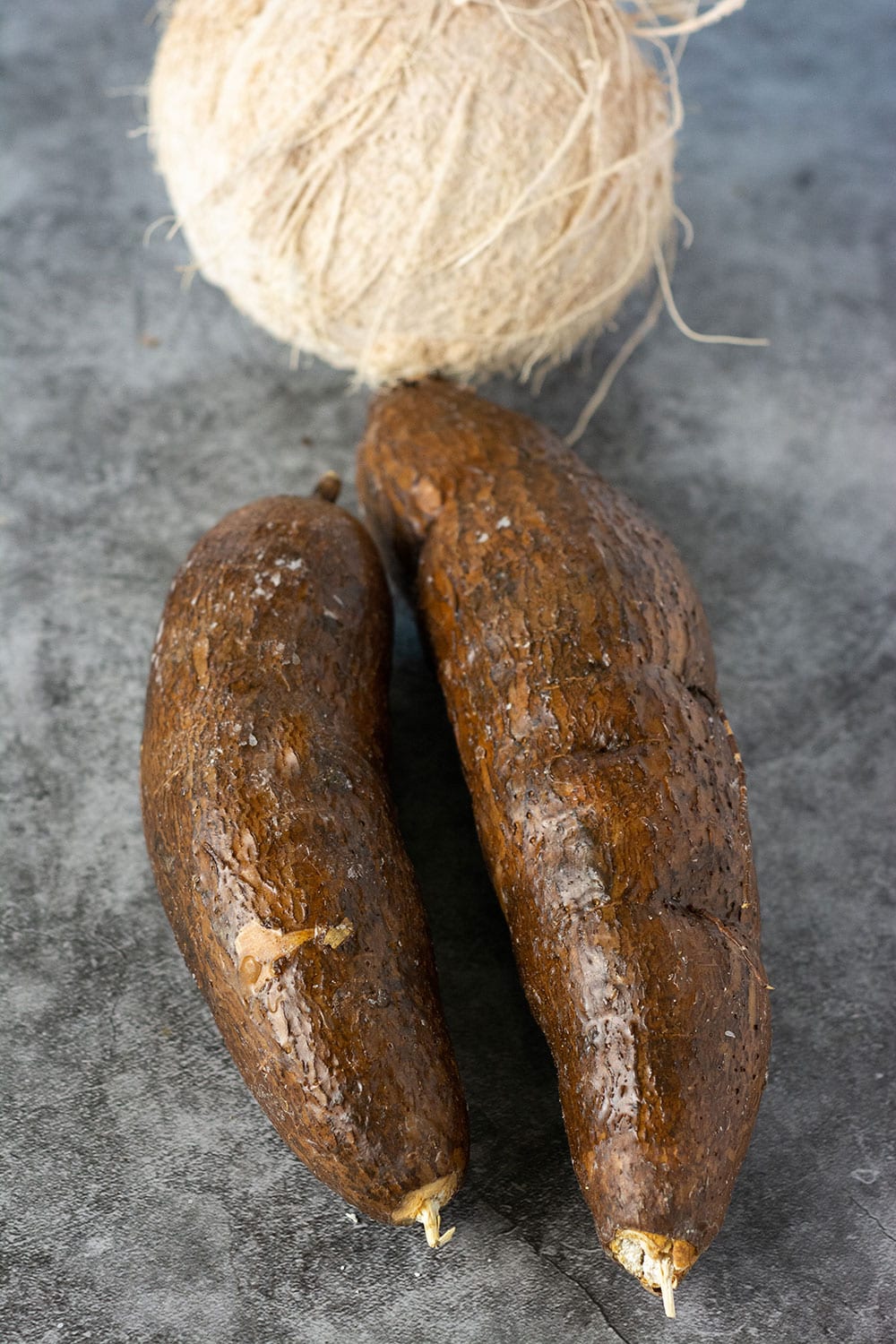 Bammy is a traditional, gluten-free flatbread made from cassava also called yuca or manioc.  It has been a staple of the Arawak Indian for centuries, the first inhabitants of Jamaica. The tradition has since been passed down to the rural people of Jamaica, especially in St. Elizabeth, Westmoreland, and St. Catherine.

Bammy was a staple in Jamaica until after World War11 when less expensive subsidized wheat flour caused a drop in the popularity of bammy as bammy was more labor-intensive.

The Jamaican government and the United Nations set up a program in the 1990s to resurrect bammy production and sell it as a trendy, convenient food product.

Traditionally bitter cassava was used to make bammy. Cassava is typically grated and put in a press bag made of thatch leaves, which is then set in an outdoor press loaded with big stones. Once drained, the cassava is ground in a mortar and then sieved until it is quite fine flour. After that, salt is added to taste.

The method of baking bammies differs from community to community in Jamaica. Traditionally, it is prepared by equally distributing a handful of flour in a baking ring over an open fire flat iron or griddle.

It is necessary to turn the bammy over halfway through baking to prevent it from becoming too brown. In about three minutes, the bread is baked and ready to eat, with a diameter of 10 inches. Traditional Native American tortillas are comparable to this. It can then be stuffed with whatever fillings you desired.

Baking thicker bammies around 6″ in diameter is a more recent (and popular) approach. Frequently, these are mass-produced in factories. When baking at home, you can use store-bought flour or make your own by hand-pressing.

Griddlers or baking pans can be used to cook the bammy. Some like to bake it in the oven and brush it with butter and other seasonings prior to baking. Due to the thickness, baking takes longer. The final product is then cut in half or slices for freezing. When ready to serve, the slices are soaked in coconut milk before being fried to a golden brown, and accompanied by fish, meat, avocado, or other side dishes. 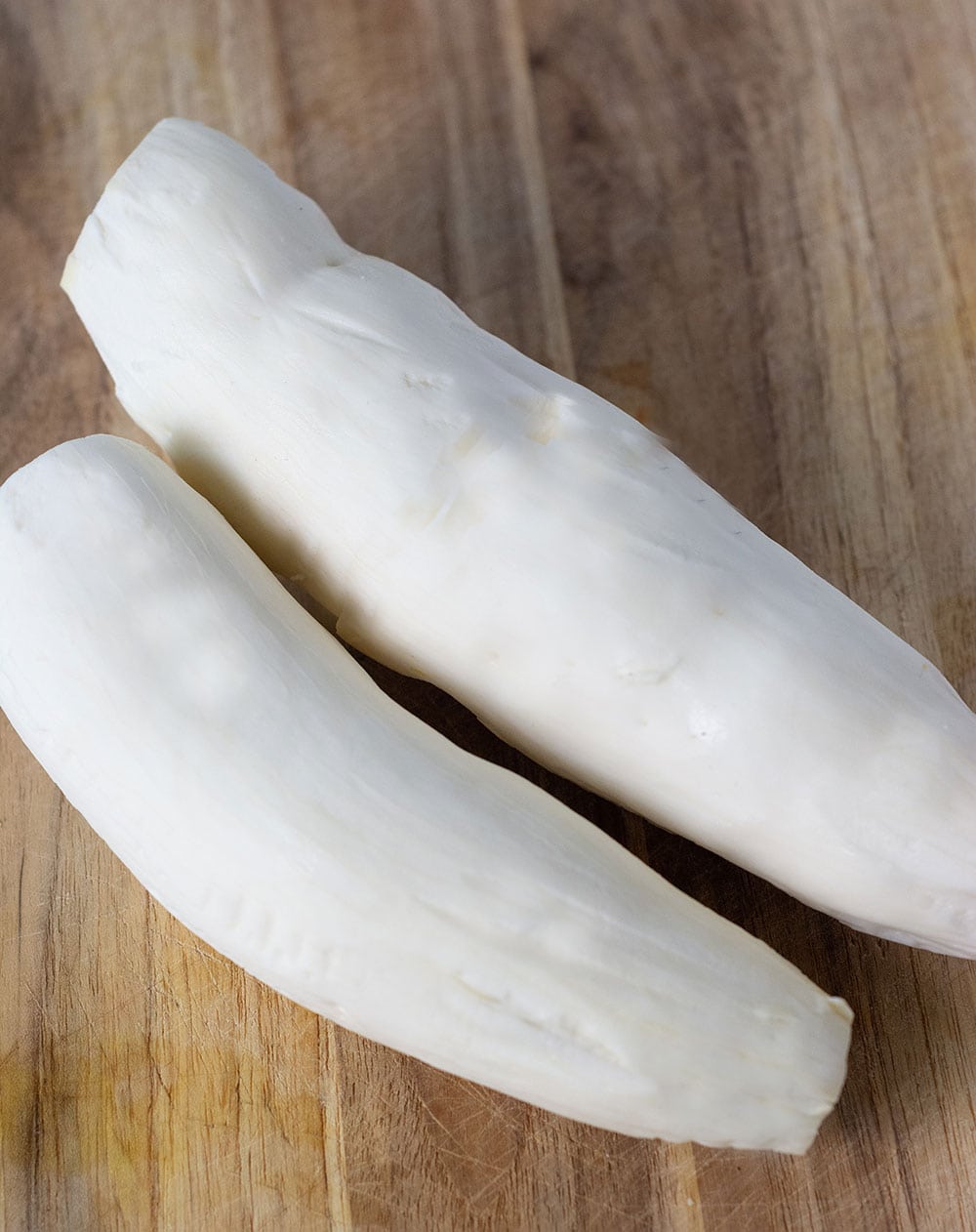 It is so easy to learn how to make Jamaican bammy from scratch with only 4 ingredients.

How To Peel Cassava?

When choosing cassava, select tubers that are free from blemishes and soft spots, I usually break off the end of the cassava while I’m in the store to reveal the white flesh if the flesh has black specks or lines, your cassava is not good. If cassava has brown spots then it might be old and rotting.

Here in the USA cassava sold in the store is usually coated with wax to extend the shelf life, the skin is tough and leathery so use a sharp knife to peel. You can substitute frozen grated cassava for fresh cassava. You will just need to defrost cassava and squeeze out liquid then proceed with the instruction where the salt is added. 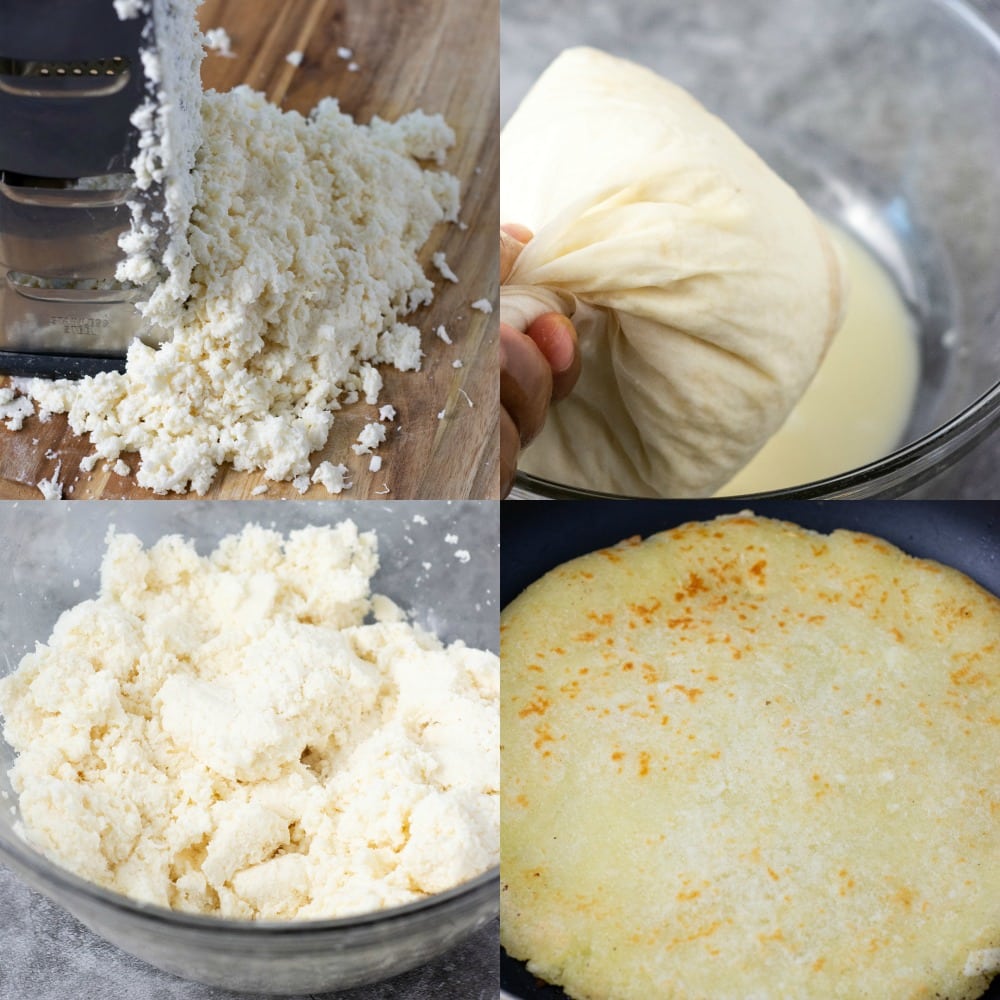 How To Prepare Bammy Jamaican Style?

I pan-fried my bammy but you can also choose to grill/air fry or oven bake your bammy. But after soaking off the milk, make sure to brush the bammy with oil prior to picking any of the cooking ways;

Air Fry: Coat/sprays the basket with oil before placing the bammy in the air fryer. 20 minutes at 180c/356F, turn halfway through the cooking time

Grill/Broil: Grill or broil the bammy on all sides over medium heat (can take some more minutes)

Oven: Preheat the oven to 350°F. Line baking sheet with parchment paper and bake for 30-35 minutes, or until golden brown, turning halfway through. 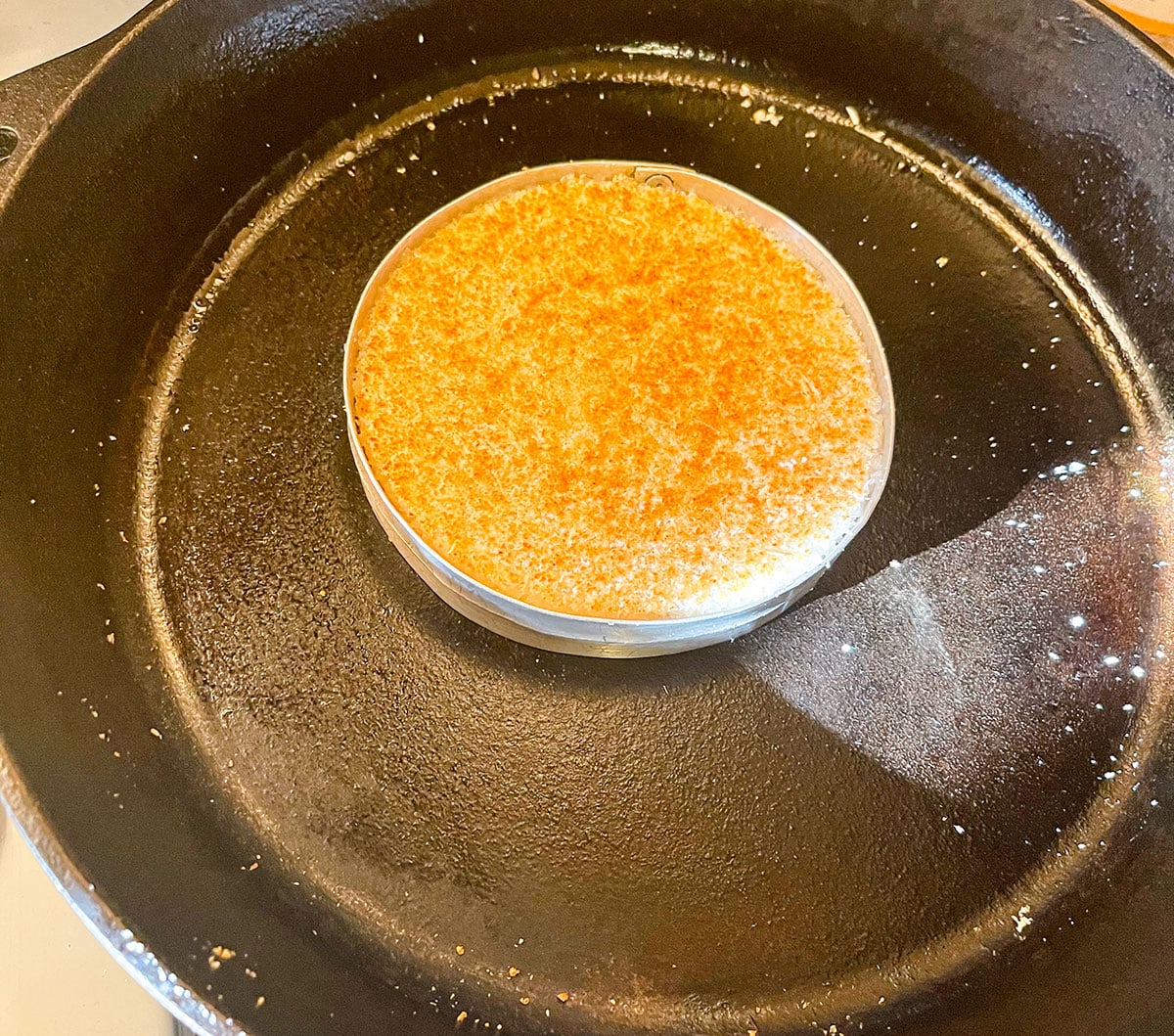 If you don’t plan on using your bammy right away, you’ll need to freeze it right away because cassava gets sour when not in use.

The best way to store homemade cassava bread is to line a ziplock container with parchment paper (sandwich them if necessary). Just make sure they’re defrosted before cooking (very important).

Other Cassava Recipes To Try

Other Jamaican Recipes To Try 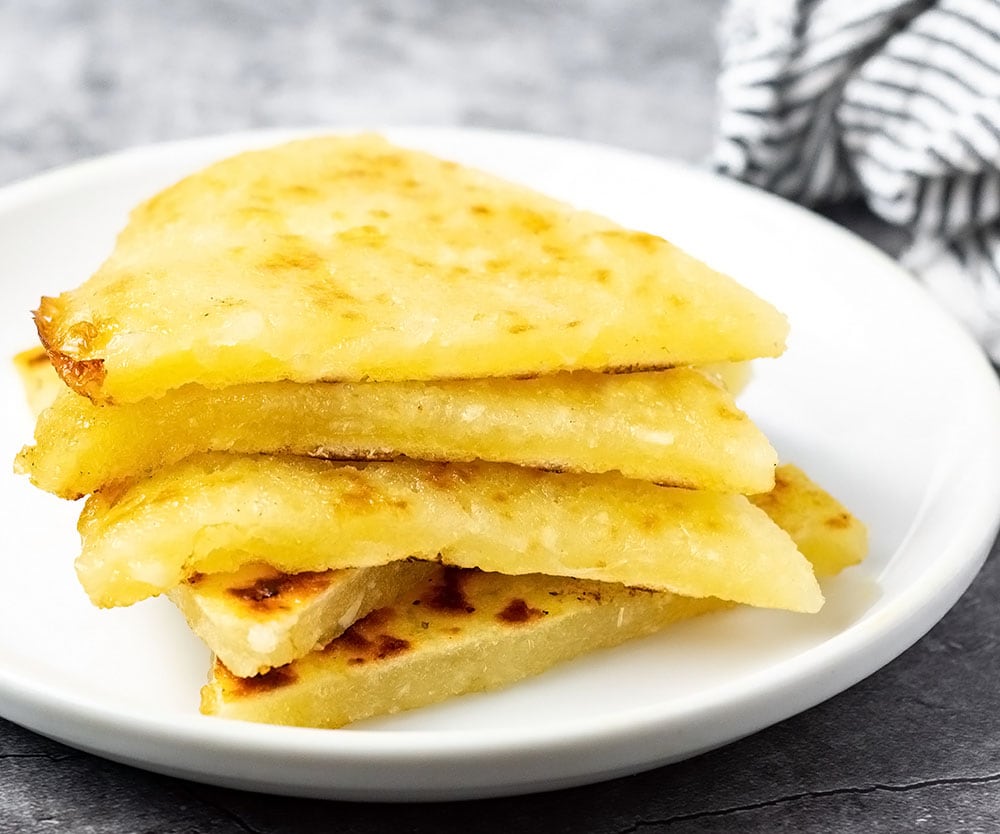 What Is Caribbean Bammy?

Arawak flatbread is a Jamaican traditional cassava flatbread that has been handed down from generation to generation by the indigenous Arawak people. It is now made in many rural areas and marketed in Jamaican and international supermarkets and by street vendors.

Bammy’s flavor is mild, somewhat sweet, and nutty. The flatbread’s unusual texture, with a crisp top and delicate interior, is the star of the show. The texture isn’t like traditional bread, but rather resembles potato cutlets but is delicate and neutral-tasting.

Is Jamaican Bammy Good For You?

Bammy contains no saturated fat or cholesterol! Fibre-rich. There is no sugar in this food, but it is high in sodium (23%), therefore avoid it if you are hypertensive or are at risk of becoming hypertensive.

What Are The Benefits Of Bammy?

Bammy is prepared from Cassava which is a root vegetable. Cassava is a carbohydrate-rich root vegetable. It also contains a little amount of fiber as well as vitamins and minerals.

Cassava may provide a number of health benefits.

Cassava has a high concentration of resistant starch, a kind of starch that bypasses digestion and also has qualities similar to soluble fiber.

Resistant starch-rich foods can help your health in a variety of ways.

Vitamin C is abundant in cassava root, and it functions as an antioxidant, boosts collagen formation, and improves immunity, among other things.

Vitamin C also helps protect the skin from damage and increases the formation of collagen, a kind of protein found in your bones, muscles, skin, and joints.

Vitamin C, on the other hand, has been shown to protect your body from oxidative stress and boost the functioning of your immune cells.

In addition, copper is plentiful, which is essential for the synthesis of neurotransmitters, the production of energy, and the metabolism of iron.

Additionally, what I didn’t know about Jamaican Bammy, for example, is that it can aid in weight reduction and migraine relief!

How Do You Eat Jamaican Bammy?

When ready to eat, dip the disc or pieces (if already cut) in coconut milk (a few people substitute animal milk) before frying till golden brown and serving with meat (particularly fish), vegetables, or legumes/peas if vegan.

What Time Of Day Is Bammy Eaten?

Bammy is a pliable bread that goes well with breakfast, lunch, and dinner. Because of its pancake-like look, Bammy can be used as a substitute for french toast, pancakes, or waffles.

Is Bammy High In Carbohydrates?

Cassava, or Manihot esculenta as it is scientifically known, is a vegetable root or tuber. Cassava is an incredibly nutrient-dense vegetable. Despite the fact that there aren’t many devotees. The tuber’s carbohydrate content is so high that it ranks third behind rice and corn.

I’ve seen a lot of questions from people recently. Some of these questions are about whether Bammy Keto is friendly or not. Well, the base ingredient is Cassava which isn’t keto-friendly due to its high carb content. Even a little portion size may be enough to knock you out of ketosis.

Where Can You Purchase Cassava?

Go to a neighborhood with a large African/Latino/Caribbean population. They will be available at supermarkets and markets in these neighborhoods.

Can Frozen Cassava Be Used In Place Of Fresh Cassava?

Yes, but only grated cassava; full frozen cassava pieces will not work. Ensure that the cassava is raw/uncooked.

Can I Use Cassava Juice?

NO! It should be discarded right away because it is harmful in its raw state (but not when cooked). Although it is used to make cassareep by Guyanese people (a type of dark thick liquid).

I’m not familiar with this method, so I won’t suggest anything other than discarding the liquid, and that is why the pulps must be carefully squeezed to remove it.

There are actually two kinds of cassava, sweet cassava, and bitter cassava, the sweet one is used for cooking like potatoes, like my Yuca Con Mojo recipe, however, the bitter one is mostly used to make bammy because the liquid is squeezed from the grated flesh and discarded before cooking.

I sincerely hope you will take some time to sit, dine, and enjoy life with one another. Try this recipe and let me know how it turns out by leaving a comment on this post! I’d love to hear from you …  Have fun cooking! 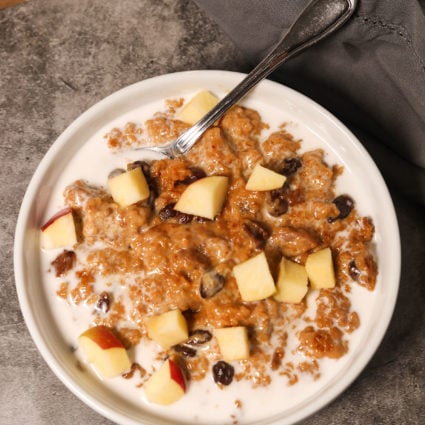 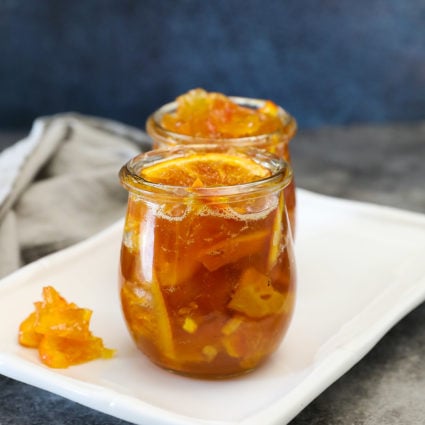