Learn how to make arepas, delicious cornmeal pockets filled with favorite vegan dishes such as jackfruit carnitas, scrambled tofu, black beans, guacamole, fried plantains are an indulgent and hearty treat that can be served for breakfast, lunch or dinner. 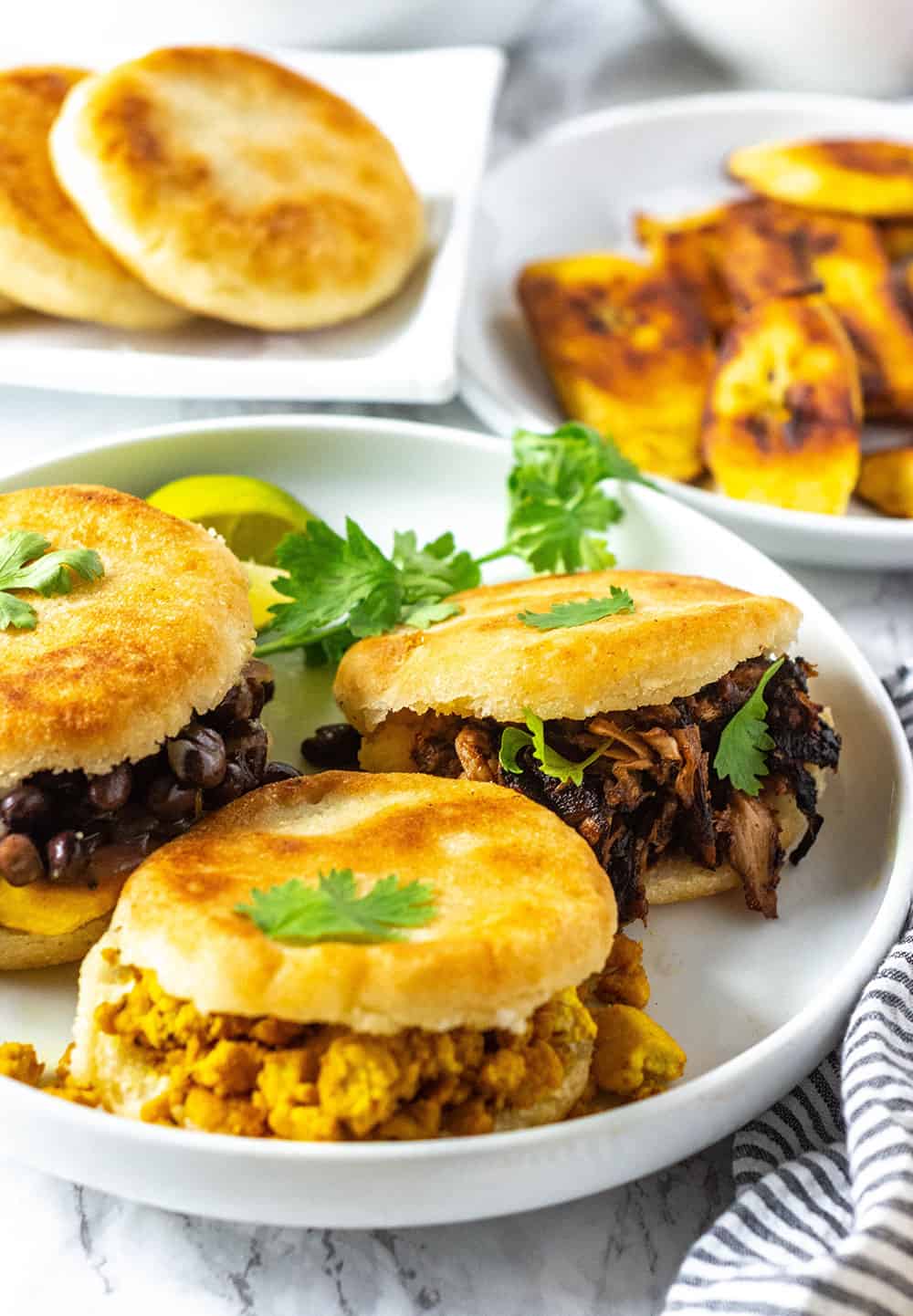 Have you wondered how to make arepas? Now you can make your own arepas at home with my easy recipe that only has 3 ingredients, Venezuelan arepas are so moist, yummy, gluten-free, and vegan. Fill them with your favorite stuffing or eat plain as a side dish.

I learned to make authentic Venezuelan Arepas recently as I had the pleasure of supervising the cafeteria for a Hispanic event with over 2000 people in attendance. Many popular Hispanic dishes were prepared from Puerto Rican Gandules Con Arroz, Dominican Mofongo and Cuban Tamales.

Below are some of the amazing recipes served at the event:

FOR THE FULL LIST OF INGREDIENTS, SCROLL TO SEE THE RECIPE CARD AT THE END. BUT BEFORE YOU SCROLL CHECK THE IMPORTANT INFORMATION THAT IS INCLUDED IN THE BLURB. 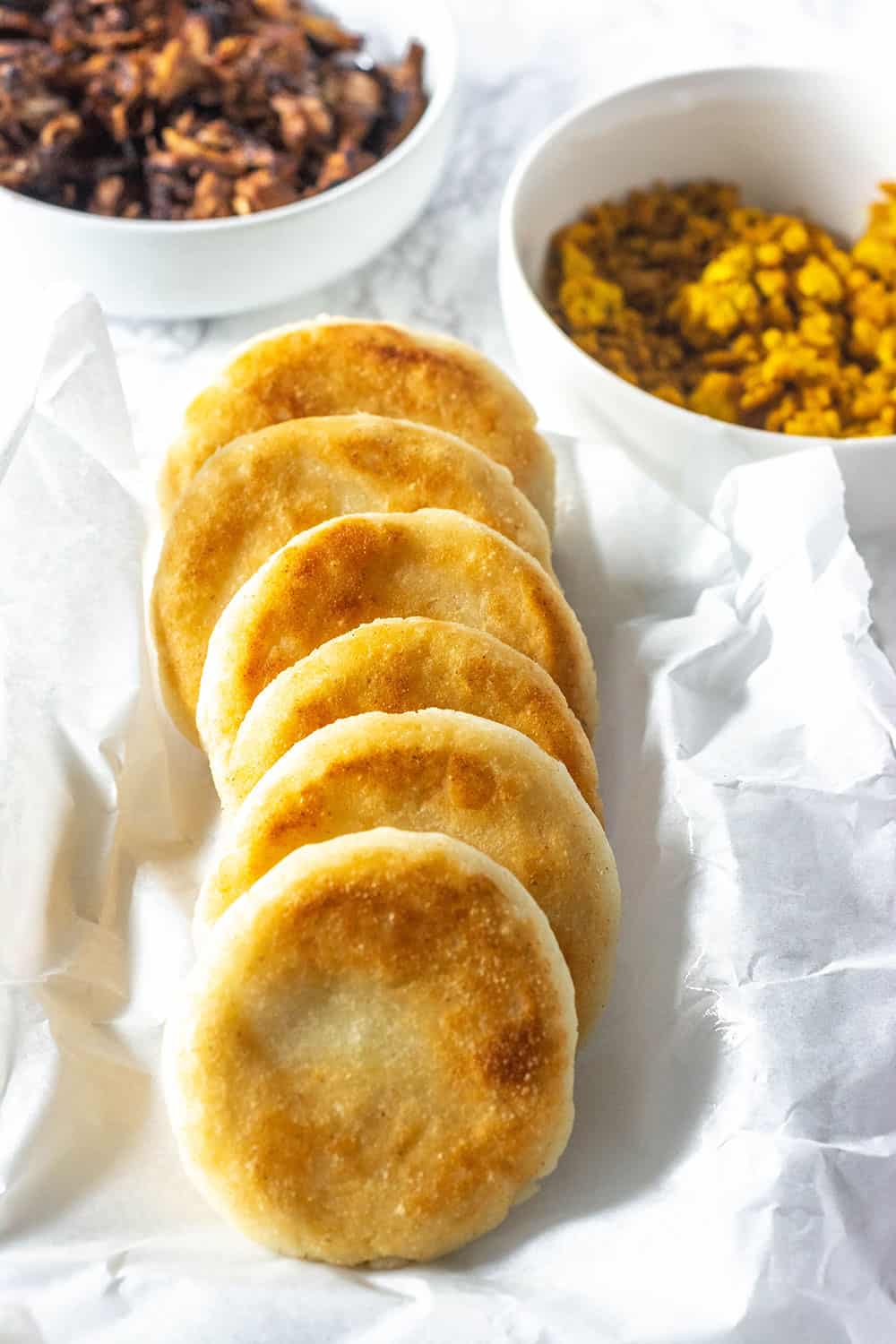 What Is An Arepa?

Arepa is derived from the indigenous term Erepa, which means corn. Arepa is a corn griddle cake made from pre-cooked cornmeal, it is popular in Colombia and Venezuela, where it is served daily with a variety of toppings to complement them. They were traditionally prepared in a pan known as a budare. However, they can be grilled, fried, or baked as well.

Colombian arepas are sweeter, thinner, and packed with cheese, but Venezuelan arepas are smaller and thicker. There are several ways to enjoy arepas, including packed with a variety of fillings or eaten on their own.

Corn, the primary ingredient in the arepa, dates back to pre-Columbian times; anthropological data indicates that it has been a popular dish in Colombia for over 3,000 years and in Venezuela for over 2,800 years. Corn, like oats or wheat in Europe, was a staple of indigenous peoples’ diets; the Chibcha people of what is now Colombia even regarded corn as a divine gift. Women were in command of its preparation in most tribes, from soaking the corn to processing them into flour that would later be turned into dough.

Nobody knows for certain when or where the first arepa was eaten – though it is reported that the Cumanagoto people, who lived in what is now Venezuela, dubbed their cornbread “erepa.” Whatever its origins, the arepa has become the most well-known symbol of Colombian and Venezuelan culinary traditions. 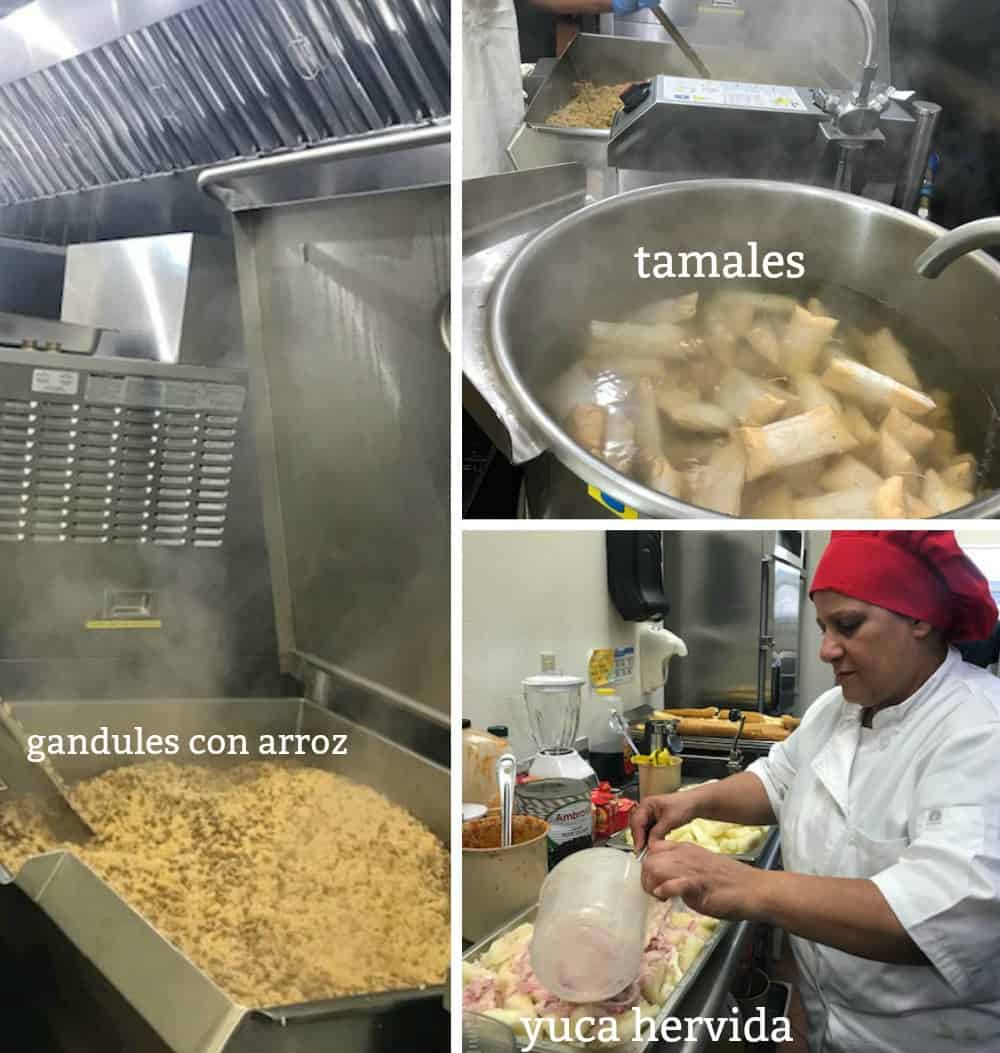 How To Make Arepas?

The cornmeal is mixed with water and salt to form a dough and then shaped into a circular disc like a pancake. It is cooked on an oiled griddle or skillet until crisp on the outside with a moist center.

The arepas are split in the center and then filled with beans, cheese, or your favorite filling. 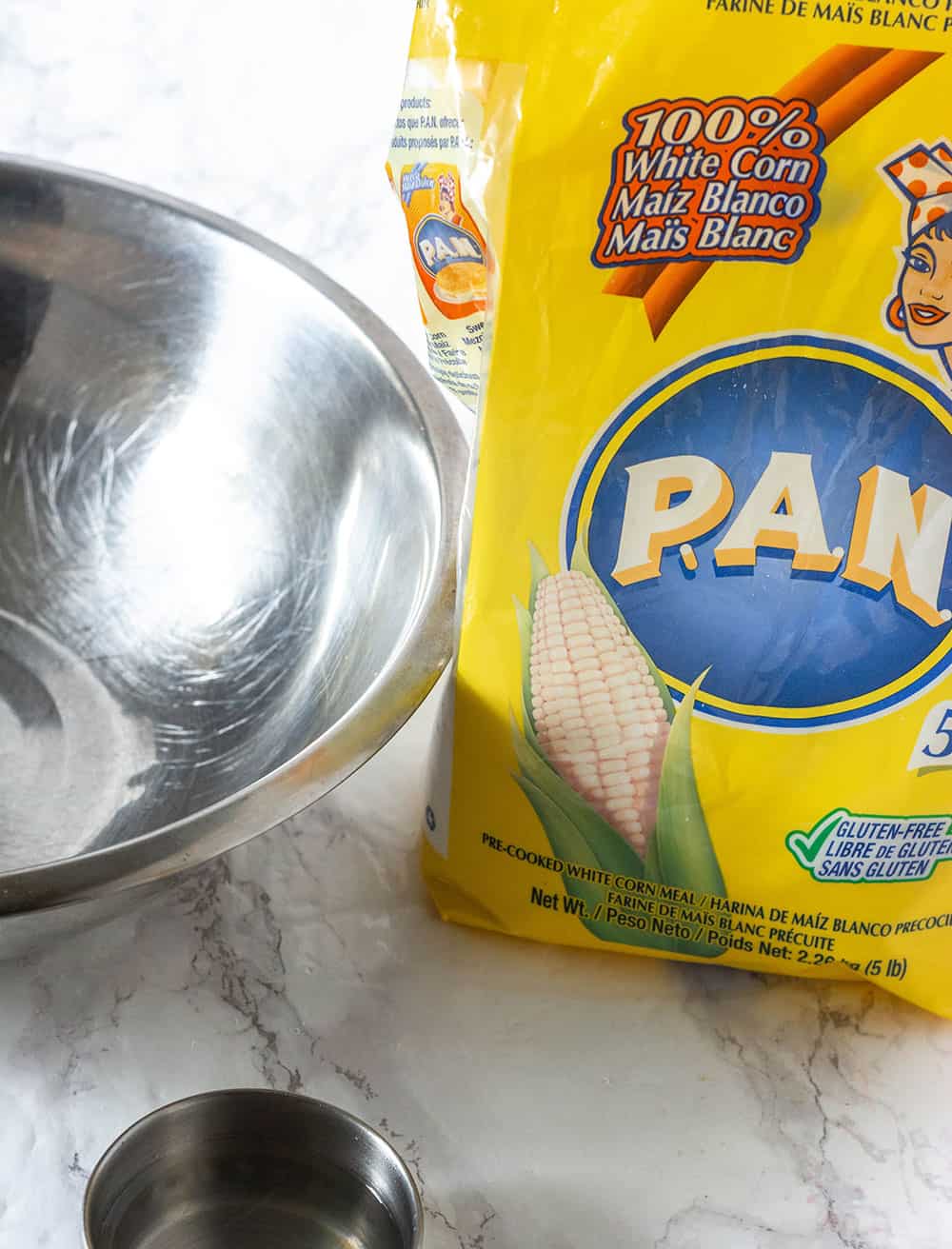 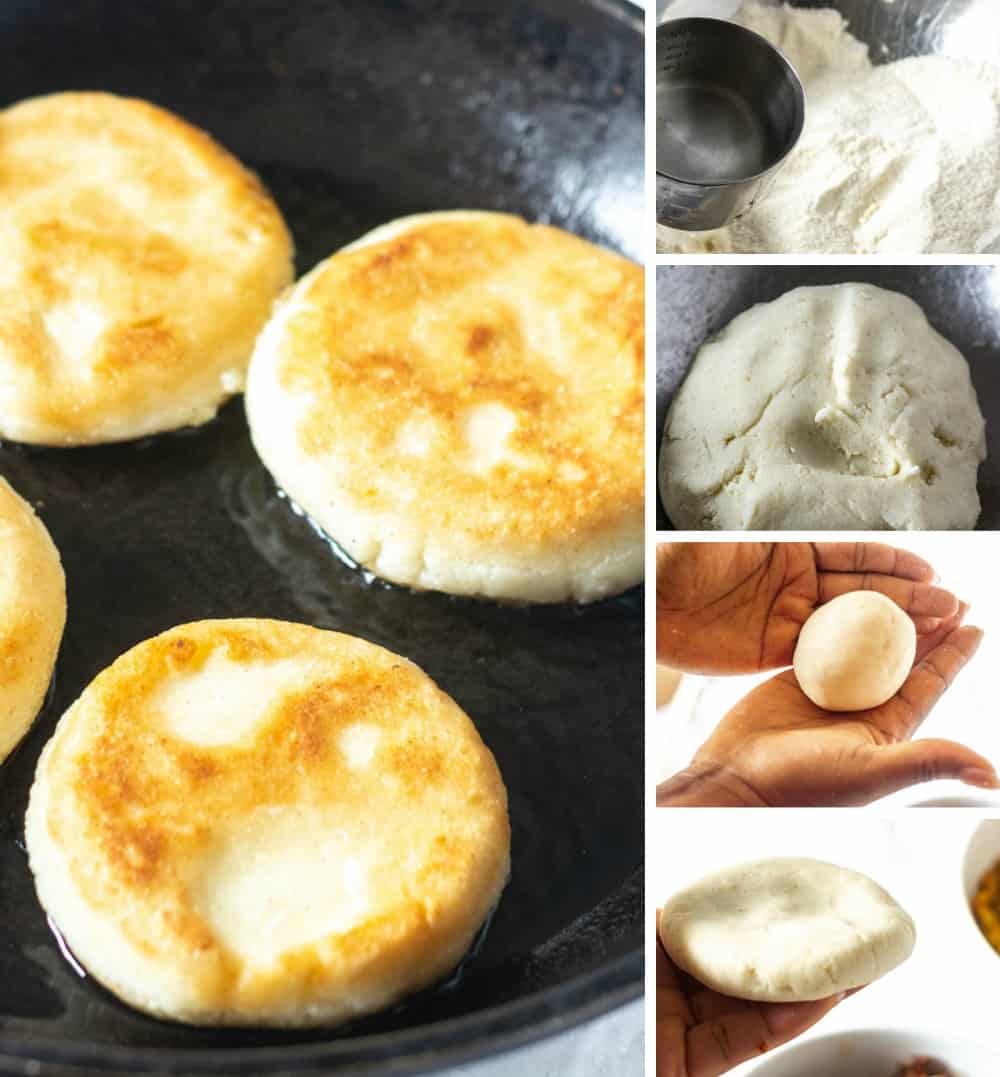 What Are Venezuelan Arepas Made Of?

The traditional method of preparing arepas is to soak corn and pound dried corn in a pilón, which is a large mortar & pestle. Cakes were formed from the moist compacted dough and cooked. Most people nowadays buy pre-cooked, dried masarepa—arepa flour—that only requires water and salt to make a dough.

What Is The Difference Between A Colombian Arepa And A Venezuelan Arepa?

The pre-Columbian arepa originates from Colombian and Venezuelan indigenous tribes.

Both countries use corn dough to make their arepas, but the way they are served differs.

In Colombia, arepas are typically served simple or loaded with cheese.  The Venezuelan arepa, on the other hand, is loaded with different contents and varies with the time of day.

Additionally, Venezuelan arepas have a little more fat in the dough than their Colombian counterparts, making them a little greasier.

Is The Arepa Venezuelan Or Colombian?

Arepas are a pre-Columbian dish that originated in what is now Venezuela, Panamá, and Colombia. Archaeological sites in the area frequently uncovered evidence of the tools used to make the arepas’ flour and the clay slabs used to cook them.

They resemble gorditas from Mexico, empanadas from Colombia, and pupusas from El Salvador. They are used similarly to tortillas and have a slightly sweet flavor, as they are typically prepared with cornflour, though can alternatively be made using cassava or yucca.

How To Eat Venezuelan Arepas?

It can — and should — be eaten without utensils or expensive dishes. All you need is a napkin and the power to eat with your hands without creating a mess — I don’t have that skill, but I’ll gladly sacrifice my elegance for a wonderful arepa.

Arepas are becoming more popular than ever because of this feature.

Do Arepas Make You Fat?

Are Arepas Good For Weight Loss?

The arepa could be a healthier choice than a sandwich for individuals on a gluten-free or low-sodium/heart-healthy diet, just make sure you fill it with nutritious fillings such as cheeses and other vegetables or proteins that you are allowed to eat.

Can You Freeze Arepas?

Here’s how to store the homemade Venezuelan arepas in the freezer:

Can You Air Fry Arepas?

Yes! For air-frying, brush the arepas with oil on both sides and arrange them in a single layer in the fryer basket (you will possibly have to cook them in batches). Cook for 3- 4 minutes on one side, then turn and cook for another 3 to 4 minutes on the other side, or until the outside is nicely golden brown and crisp.

What Is Arepa Flour?

Arepa Flour/Masarepa is made from dehydrated cooked cornmeal. It’s what gives arepas their distinct texture and taste.

Where To Buy Masarepa/Arepa Flour?

Masarepa comes in white or yellow variations and is found in the Latin division of most supermarkets. White flour is called for in this recipe, but you can use whichever flour you like. Goya and P.A.N. are two well-known brands.

What Is The Difference Between Masa Harina And Masarepa?

Masarepa flour is the preferred flour for producing arepas. On the other hand, masa harina is made of nixtamalizing corn, which removes the germ and the outer layer of the kernel before grinding.

Can I Use Cornmeal Instead Of Masarepa?

Masa harina is preferable to cornmeal, however, cornmeal can also be used.

How to Make Arepas with Masa Harina?

If you don’t have masarepa (an item that might be difficult to locate, particularly organic and non-GMO), I’ve found a gluten-free substitute! (Please note that this is not a traditional method.)

Simply substitute 1 ½ cups masa harina, ¼ cup gluten-free flour/arrowroot starch, and ¼ cup coconut flour for the full quantity of arepa flour (2 cups as listed in the original recipe). Additionally, I like to add 1 teaspoon of baking powder with the flours to give them some rise. If the dough is too sticky or crumbly, add additional gluten-free flour or you can add arrowroot starch. Follow the recipe exactly as directed.

Are Arepas Similar To Pupusas And Gorditas?

There is often confusion between arepas, pupusas, and gorditas. While all three are packed, thick tortillas, there are some significant distinctions between them (apart from their origin countries).

The filling for pupusas is packed inside the tortilla.  While gorditas resemble arepas in appearance, they are prepared from a different sort of cornflour.

Take a look at the embedded links if you’re interested in learning more.

Is Masarepa The Same As Polenta?

Masarepa has a more refined and gentler demeanor. It’s sold in stores as “Harina De Maiz.” After precooking the corn, it is crushed into corn flour. It has an extremely smooth texture, which is why it is on a PERFECT polenta basis.

Some Filling Ideas Below:

Serve your arepas with Black Beans, Baked Plantains And Guacamole. 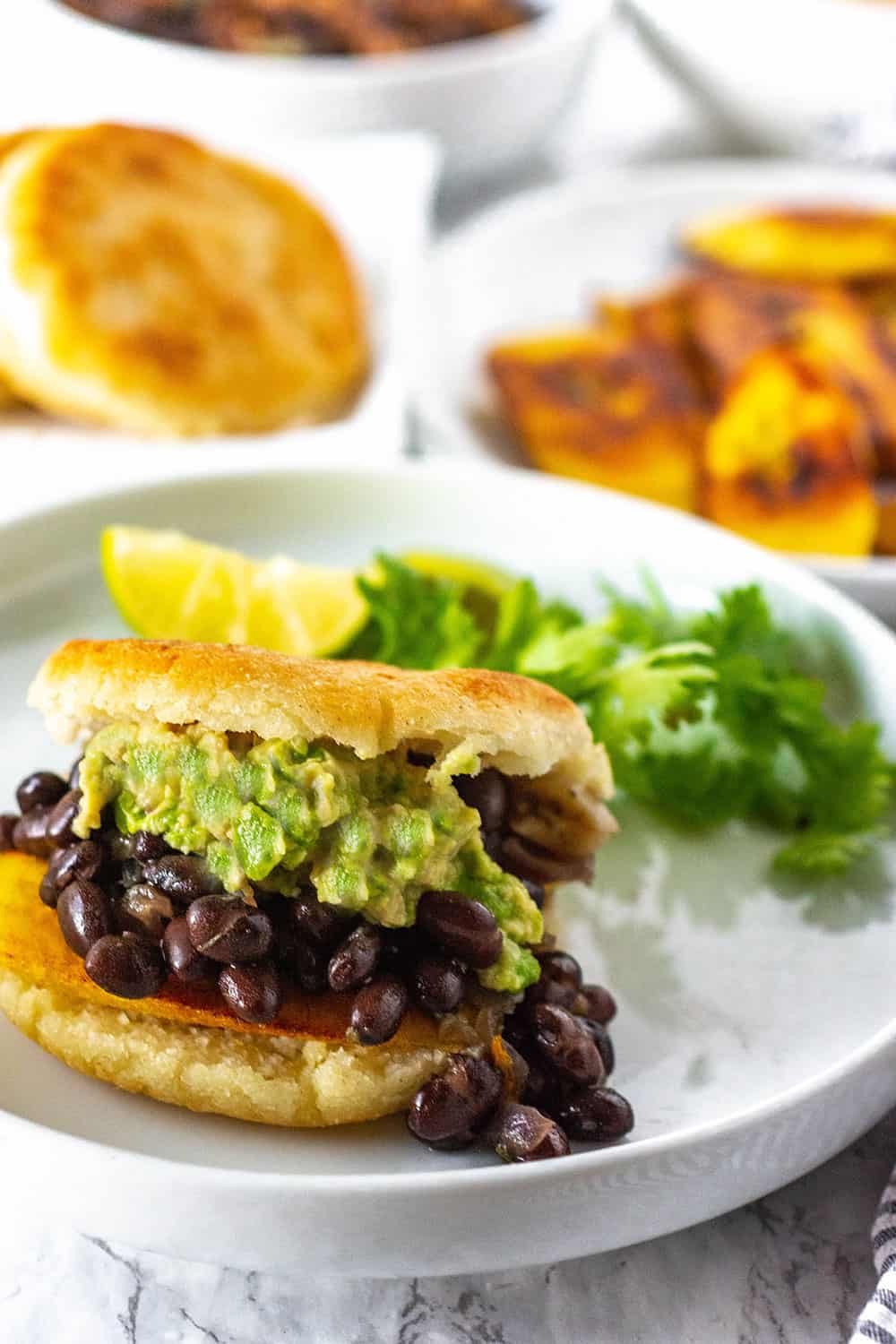 Arepas are so delicious served with Jackfruit Carnitas And how about some Coleslaw? 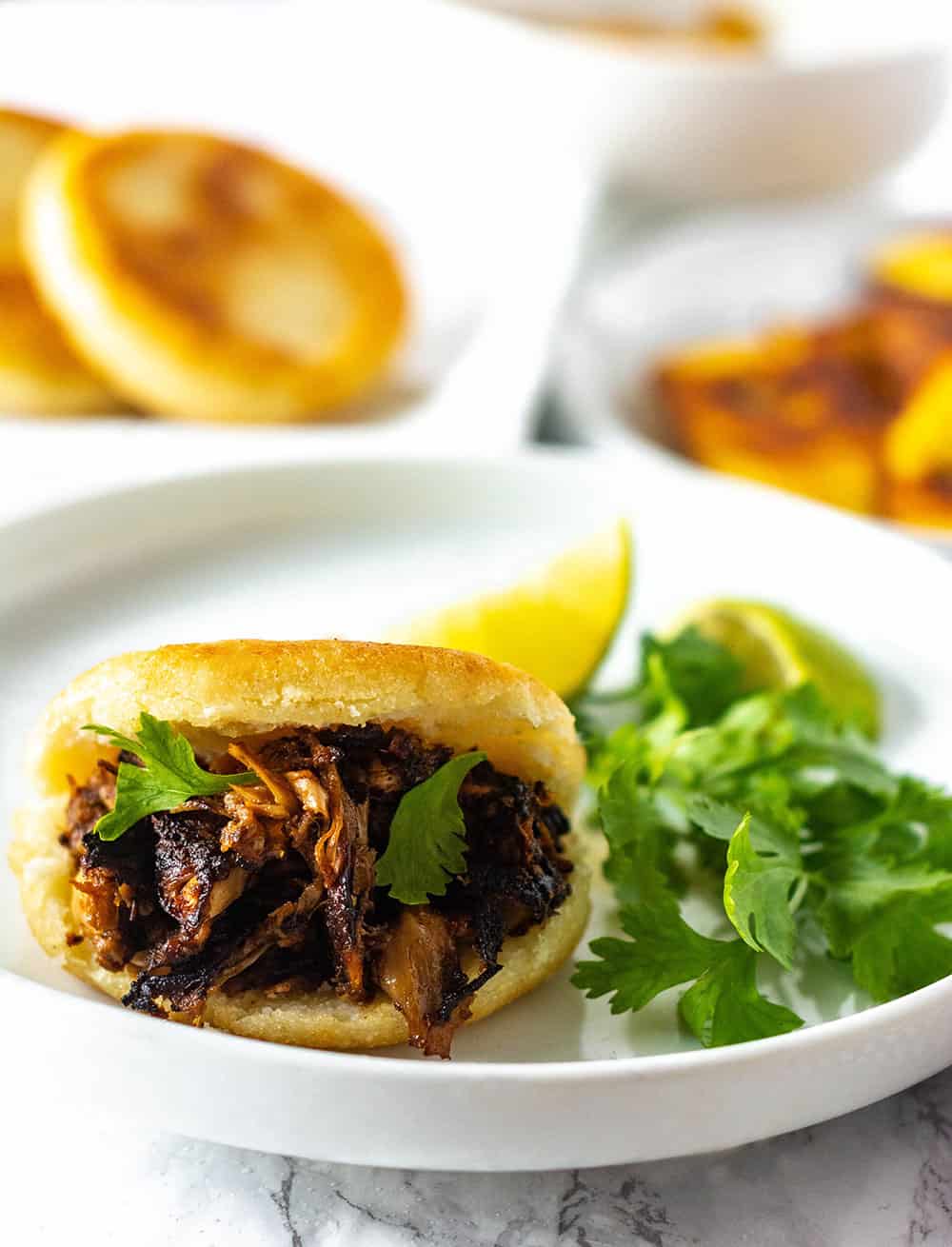 A great breakfast treats is Arepas stuffed with Mexican Style Scrambled Tofu, or how about this Easy Scrambled Tofu Recipe. For a Jamaican-style breakfast then arepas filled with my Vegan Ackee would be amazing! 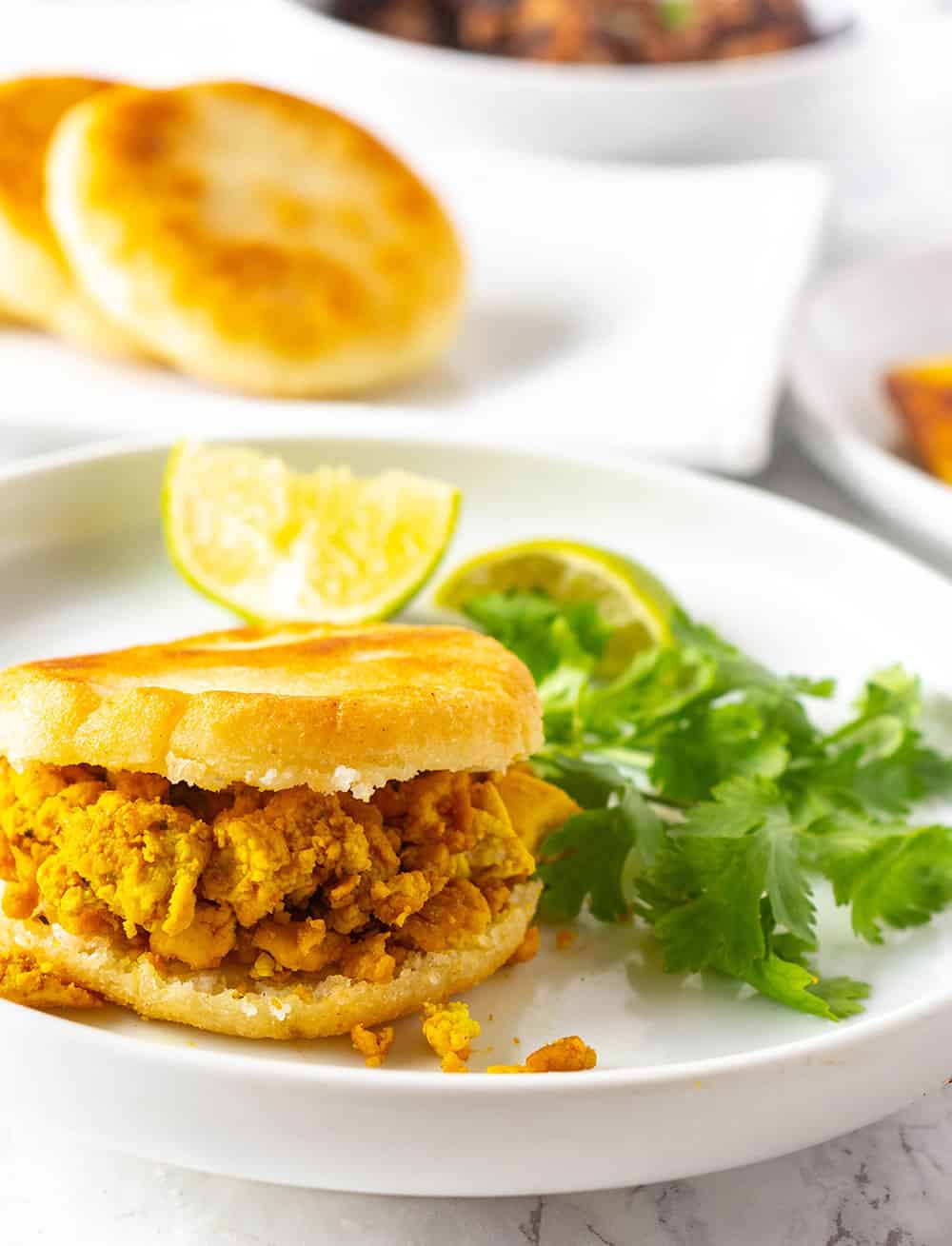 I hope you enjoy these arepas as much as we do! Because:

Give this a shot. It’s incredibly delicious and super easy. And as always, I would love to hear from you. Feel free to leave any feedback or share your own experience with us in the comments section below. 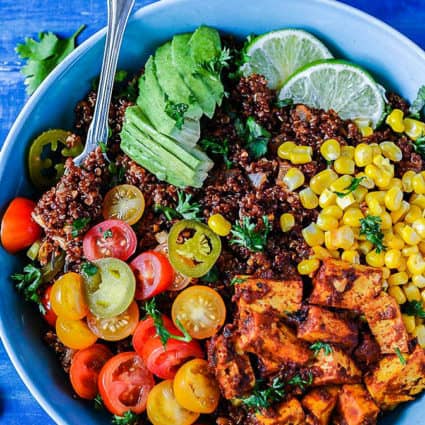 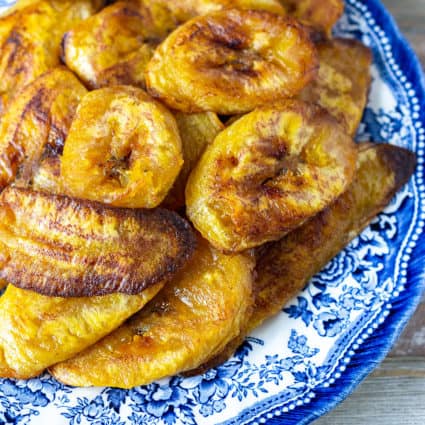 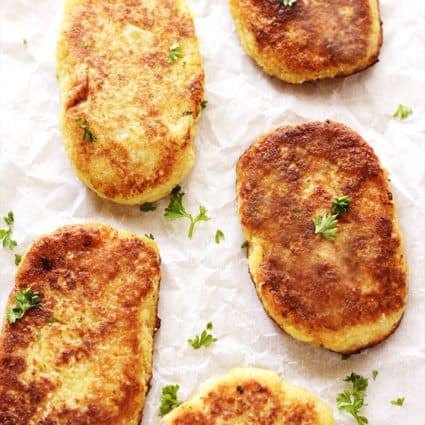